Cancer screening is a diagnostic procedure that aims to identify cancer before the onset of any serious symptoms. Cancer screening tests are done in order to diagnose cancer in the body and therefore reduce the number of people who develop cancer or reach the later stages of cancer where it becomes untreatable. Different types of cancers have screening tests that are specific to that particular cancer. These tests can help to detect cancer at its early stages, where it may be easier to treat. The market for cancer screening is anticipated to grow at a significant CAGR of 9.67% over the forecast period, i.e., 2020-2027. Moreover the market is anticipated to reach a market value of USD 281,385.28 million by the end of 2027.

Based on the regional analysis, the market is segmented into North America, Europe, Asia Pacific, Latin America and Middle East & Africa. The market in North America is anticipated to hold the leading share with a 40.64% share in 2019 which is predicted to grow further. The growth in the region can be attributed to the increase in investments towards healthcare from government and private entities in order to maintain the highest quality of care offered in healthcare facilities. The market in the United States is predicted to account for the major share in North America which can be attributed to increasing adoption of innovative screening methods in the region over the forecast period. The market in Asia Pacific region is anticipated to grow with the highest CAGR of 11.12% over the forecast period. The market is primarily led by the demand for new and improved technology and treatment methods from China. With the rising availability of advanced healthcare in Asia Pacific along with growing number of manufacturers investing in countries such as China, Japan, & India to address the growing demand for advanced early stage diagnostics products and solutions, the demand for cancer screening products in this region is estimated to witness a rapid growth in the coming years. Further, the market in Europe is expected to reach a market size of USD 83,808.63 million by 2027. It has been observed that with the growing availability of innovative treatment methods, there has been a rise in demand for effective screening products in the region for time sensitive diagnosis. Primarily driven by the demand from Germany, UK, France & Italy, this region is anticipated to showcase a high demand in future.

On the basis of diagnostic methods, the market for cancer screening is segmented into genetic tests, instrument based tests and platform based tests. Out of these, the segment for instrument based tests is presently generating the highest demand in the market. This instrument based tests segment is anticipated to attain a market size of USD 177,978.87 million by the year 2027 and is projected to grow with a significant CAGR over the forecast period. This segment is further divided into imaging tests, endoscopy procedures and biopsy, out of which, the segment for imaging tests is predicted to hold the leading share in the market on account of rising demand for minimally invasive procedures globally. CLICK TO DOWNLOAD SAMPLE REPORT 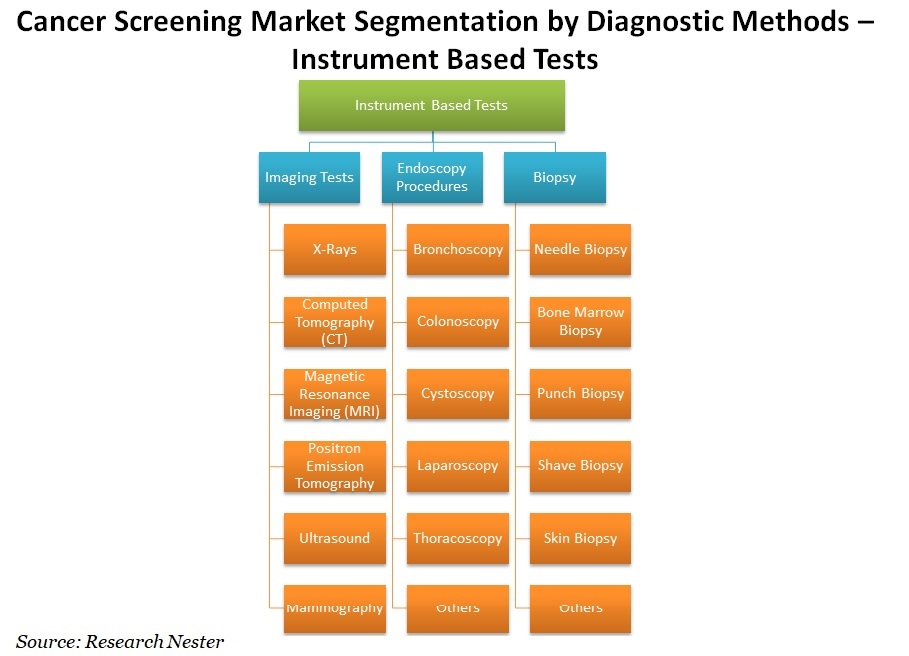 Based on the type of cancer, the market is sub-segmented into lung cancer, breast cancer, prostate cancer, colorectal cancer, blood cancer, liver cancer, pancreatic cancer, skin cancer, cervical cancer and others, out of which, the lung cancer segment is estimated to capture the largest market with a market share of USD 68,591.86 million by 2027. Lung cancer begins in the lungs and may spread to lymph nodes or other organs in the body that are associated with the lungs. Lung cancers are grouped into two main types known as small cell lung cancer (SCLC) and non-small cell lung cancer (NSCLC). Globally, lung cancer is the leading cause of death in both men and women. According to American Cancer Society, the overall probability of lung cancer in men is about 1 in 15 men, on the other hand, for women the risk is about 1 in every 17 women. Moreover, for smokers the risk of developing lung cancer is much higher than for non-smokers. This can be attributed to the rising lung cancer cases.

The market for cancer screening is segmented on the basis of end user into hospitals, oncology clinics, diagnostic centers and others. The hospitals segment held the leading share in the market with a value of USD 76,272.13 million in 2019 and it is anticipated to grow further during the forecast period. This can be attributed to the high number of patients encountered by hospitals and large facilities in comparison to smaller facilities such as clinics. Furthermore, on account of the increasing number of freestanding diagnostic centers offering comprehensive diagnostic solutions that are not available at smaller healthcare facilities is anticipated to result in growth of this segment at a high CAGR of 11.32% over the forecast period. 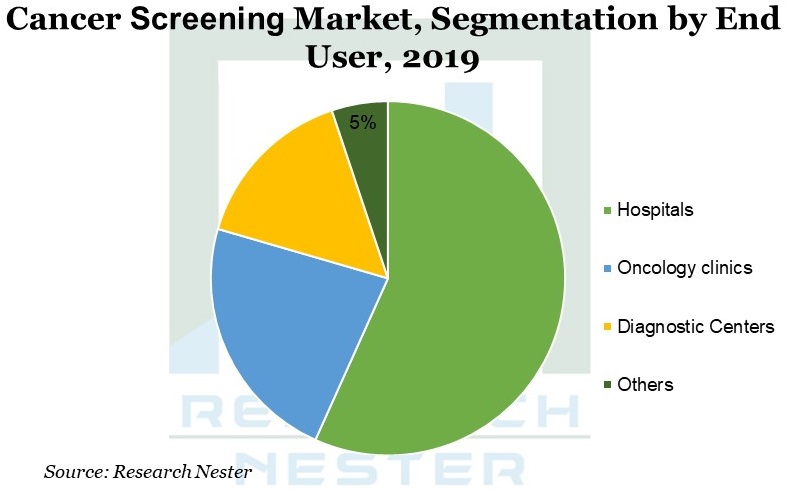 According to the World Health Organization, the global cancer burden is estimated to have risen to 18.1 million new cases and 9.6 million deaths in 2018. Moreover, about every one in 5 men and one in 6 women worldwide develop cancer during their lifetime, and one in 8 men and one in 11 women die from the disease. There are several factors responsible for the incidence of cancer such as growing and ageing population worldwide and an increase in exposure to cancer risk factors that are associated with social and economic development. Further, with the advancements in the technology for the treatment of cancer, the survival rate is increasing for many types of cancers. On account of such factors there is a high demand for advanced cancer screening technologies. In addition to this, the healthcare spending is increasing on account of several factors such as an aging population, changes in disease prevalence or incidence rate, and increase in the price and intensity of services. As a result of these, the market is predicted to grow in the coming years.

The increasing number of regulations and complicated testing regimes on cancer screening are estimated to act as restraining factors for the growth of the market. The testing of these cancer screening systems includes trials and clinical tests for their approval at various levels. With lack of clarity and standardization for the approvals, health claims and manufacturing standards across developing countries, the systems are highly unregulated. Further, rapid technological advancements are predicted to bring in the need for standardized technician training which is lacking across the developing regions of the world and is further estimated to limit the market growth.

What are the major factors driving the growth of the Cancer Screening market?

Increasing development of innovative technology, ageing population worldwide and increase in exposure to cancer risk factors are major growth factors for the market.

What would be the CAGR of Cancer Screening market over the forecast period?

Which region will provide more business opportunities for growth of Cancer Screening market in future?

Who are the major players dominating the Cancer Screening market?