Cancer is a disorder that involves abnormal growth of cells which could spread to other body parts. Over 100 types of cancer affect humans. Among men, lung, colorectal, prostate, liver and stomach are the most common types of cancer while among women, cervical, breast, lung, colorectal and thyroid cancer are the most common. The burden of its treatment continues to grow putting tremendous physical, financial and emotional strain on individuals, communities and nations. Majority of middle and low income countries are not adequately prepared to manage this burden. Consequently, the need to have a robust cancer diagnostics system is growing. Early diagnosis of this disease exponentially increases the success rate of the treatment. Therefore, cancer diagnostics play an extremely important role in ascertaining the all-round wellbeing of an individual.

According to World Health Organization, cancer is the second leading cause of death globally with 70% of the total deaths occurring in low and middle income countries.

The cancer diagnostics market is expected to attain a robust CAGR during the forecast period i.e., 2020-2028. This can be attributed to the rising incidence of cancer among people and inadequate medical infrastructure of middle and low income countries. The market is segmented by product into platform based products and instruments, out of which, the instrument segment is anticipated to grow at the highest rate in the cancer diagnostics market on account of rising cancer cases, growing geriatric population, technological advancements and increasing sedentary lifestyle. CLICK TO DOWNLOAD SAMPLE REPORT 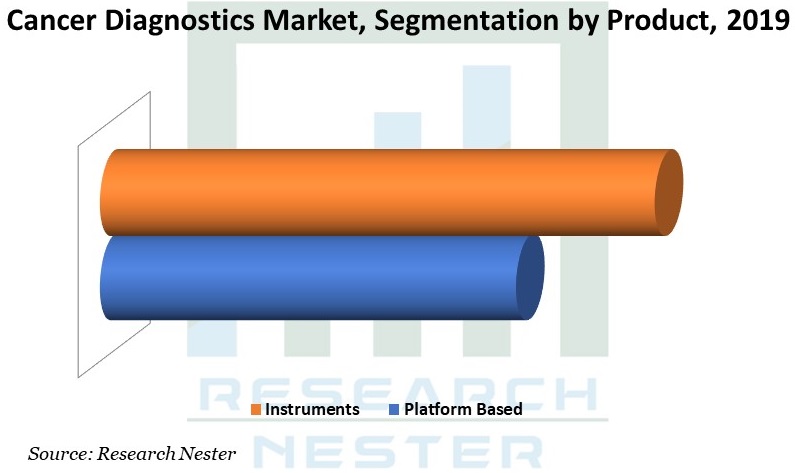 Rising sedentary lifestyles of people living in the developing and developed countries has led to an increase in the number of head, lung and neck cancer cases as a result of improper posture. Additionally, the surge in consumption of tobacco & alcohol is estimated to result in a higher number of cancer cases. Further, the increasing awareness about diagnostics among the masses is predicted to be the main growth driver for the cancer diagnostics market. Some developing countries following traditional cancer treatment are now looking to adopt modern cancer diagnostic methods for earlier detection. Owing to these factors, cancer diagnostics market is expected to grow during the forecast period.

Increasing life expectancies in different countries across the world has led to significant growth in the older population. Countries such as Japan and China contain a larger number of elderly populations as a result of improved healthcare, political, economic and social conditions. Consequently, complexity of diagnosis has also increased along with the demand for cancer diagnostics. Owing to these factors, cancer diagnostics market is expected to grow during the forecast period.

Need for Evidence Based Approach towards Cancer Diagnosis

There is substantial evidence available through randomized controlled trials concluding that the adoption of cancer diagnostics could significantly reduce the mortality rate caused by cancer. Additionally, people are becoming more inclined towards evidence based treatments with higher accuracy so that the entire process is swifter and has minimum side effects. On the back of these factors, cancer diagnostics market is anticipated to grow over the next few years.

Extensive research and development activities being carried out by the government organizations and research universities are estimated to open up more opportunities for the sector along with increase the market growth over the forecast period.

Technological advancements in the fields that lead to the development of highly advanced medical products, equipment and treatments such as endoscopy, biomarkers, biopsy and imaging are predicted to drive the market growth in future.

The radiations emitted from various imaging tests could increase the risk of developing a cancer later in the life of the person. This is estimated to negatively affect the market growth over the forecast period. However, newer diagnostic methods are being developed that are better and are anticipated to make this risk negligible.

Cancer diagnostics require technically skilled professionals. As there is already a dearth of healthcare professionals across the world, it is predicted to hamper the market growth in the forecast period.

Our in-depth analysis of the cancer diagnostics market includes the following segments:

On the basis of regional analysis, the cancer diagnostics market is segmented into five major regions including North America, Europe, Asia Pacific, Latin America and Middle East & Africa region. The market in North America is anticipated to hold the largest market share on the back of increasing geriatric population, rising research and development initiatives by the government, increasing cancer cases among the population and need for evidence based treatment for cancer. On the other hand, the market in Asia Pacific is anticipated to grow at the highest CAGR over the forecast period on the back of improving health infrastructure, rising cancer cases and increasing geriatric population in the region.

The global Cancer Diagnostics market is further classified on the basis of regions as follows: