The global building automation systems market is estimated to garner a sizeable revenue by growing at a CAGR of ~11% over the forecast period, i.e., 2022 – 2030. The growth of the market can be attributed to the increasing need for proper energy management, and rising emphasis on overcoming utility costs across the globe. Along with these, growing technological advancements in wireless communication technologies, and escalating number of government and private projects associated with building automation are also expected to drive market growth in the upcoming years. Furthermore, rapid growth of IoT technology, and initiatives associated with reducing carbon emissions is projected to offer profitable opportunities to the market in the near future. It was calculated that the automotive and enterprise internet of things industry grew by more than 20 percent in 2020, since the last year. Moreover, by the end of 2019, more than 4.5 billion IoT endpoints were evaluated to be in use. 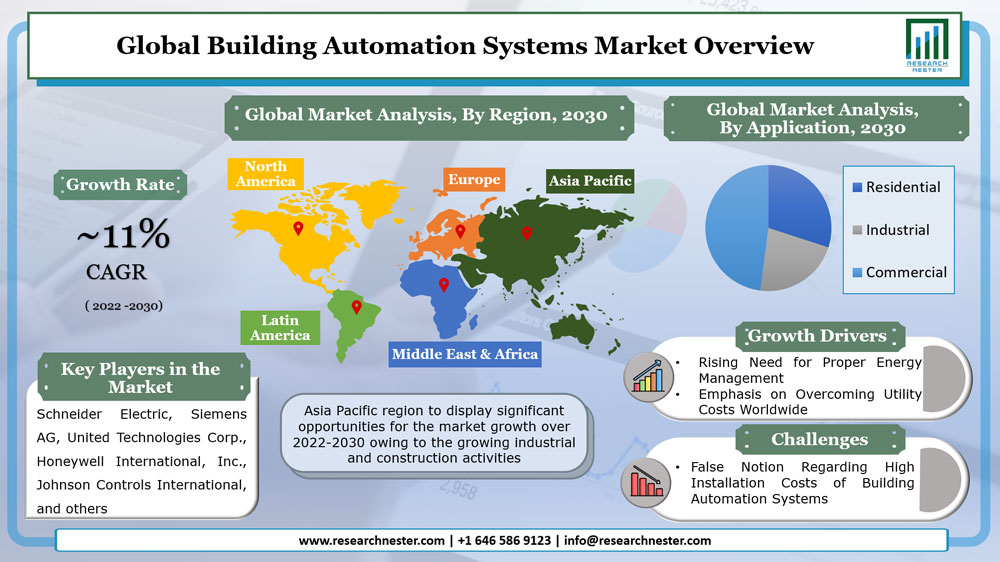 The market is segmented by offering into facility management systems, security and access controls, and fire protection systems, out of which, the security and access controls segment is anticipated to hold the largest share in the global building automation systems market. This can be accounted to their ability to increase security level, monitor activities and movements of people, and keep a record of people entering and exiting buildings. Apart from these, these systems have revolutionized building security by completely eliminating human intervention, which is another factor predicted to boost market segment growth in the future. Additionally, on the basis of application, the industrial segment is assessed to observe the highest growth during the forecast period, which can be ascribed to the growing adoption of smart building solutions for achieving energy and cost savings, and optimizing surveillance activities. CLICK TO DOWNLOAD SAMPLE REPORT

On the basis of geographical analysis, the global building automation systems market is segmented into five major regions including North America, Europe, Asia Pacific, Latin America and the Middle East & Africa region. The market in Asia Pacific is estimated to witness noteworthy growth over the forecast period on the back of the surging industrial and construction activities, and high economic growth in the region. In addition, government initiatives regarding energy conservation is also a crucial factor expected to accelerate the region’s market growth in the coming years. Moreover, the market in North America is predicted to acquire the largest share during the forecast period owing to the ongoing technological developments, high adoption of building automation systems, and presence of prominent market players in the region. Moreover, the increasing demand for commercial building automation in the United States, backed by the surge in awareness for the numerous benefits associated with the adoption of automation systems, and the surge in the number of commercial buildings in the country, is also predicted to remarkably drive the market growth in the region. According to the data by the U.S. Energy Information Administration (EIA), in the year 2018, the number of commercial buildings crossed 6 million, registering an annual growth of 6% across the country. 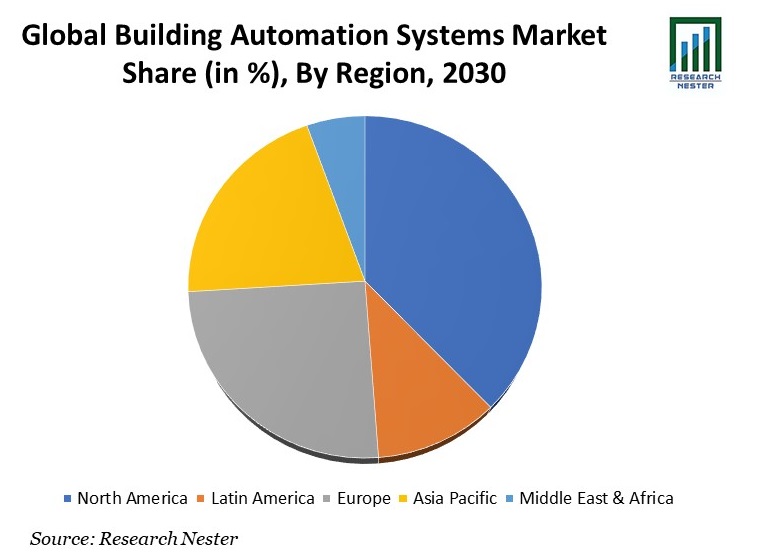 The global building automation systems market is further classified on the basis of region as follows:

What are the major factors driving the growth of the building automation systems market?

What would be the CAGR of building automation systems market over the forecast period?

What are the challenges affecting the building automation systems market growth?

Which region will provide more business opportunities for growth of building automation systems market in future?

Asia Pacific will provide more business opportunities for market growth owing to the surging industrial and construction activities, and high economic growth in the region.

Who are the major players dominating the building automation systems market?

The major players in the market are Schneider Electric, Siemens AG, United Technologies Corp., Honeywell International, Inc., and others.

What are the segments in the building automation systems market?

The market is segmented by component, offering, application, and by region.

Which segment captures the largest market size in the offering segment in the building automation systems market?

The security and access controls segment is anticipated to hold largest market size and is estimated to grow at a notable CAGR over the forecast period and display significant growth opportunities.