Blood Plasma is a straw colored liquid component of blood which is the largest component of the blood. It acts as a transport medium for delivering different types of nutrients to the cells of different organs and is also responsible for transporting various types of waste products from the cells to the kidneys for excretion. It plays an important role in maintaining the blood pressure of the body and also helps to maintain homeostasis. Additionally, it transports several hormones and proteins to different parts of the body and helps in blood clotting along with fighting diseases.

The blood plasma from the blood is separated when a tube of fresh blood containing anticoagulant is centrifuged until all the blood cells settle at the bottom of the tube. The plasma component of the blood helps in the treatment of various types of health related disorders. The blood plasma contains about 6-8 percent of the proteins. When clotting of blood is activated, fibrinogen in the blood gets converted into fibrin which results to form a blood clot where vascular disruption has occurred. If the glucose concentration is high or low in the blood plasma, it confirms that some serious health related disorder has occurred (hypoglycemia and diabetes mellitus).

The global blood plasma market is observing vibrant growth on account of increasing cases of hemophilia coupled with the enhancement in the health related problems due to changing lifestyle. Further, rising healthcare expenditure and increase in immunodeficiency diseases are estimated to support the growth of the market. Additionally, rising government initiatives for plasma donation and increased awareness among people are driving the growth of the market. Factors such as rising investment in the research and development, growing healthcare sectors, growing rate of geriatric population and increasing adoption of plasma derived products are anticipated to escalate the market shares.

The blood plasma market is anticipated to record a CAGR of 10.2% over the forecast period i.e. 2019-2027. The market is segmented by components into coagulation factors, immunoglobulin, hyperimmune globulin, albumin, factor VIII, factor IX & others, out of which, the immunoglobulin segment is anticipated to have the largest market share on account of higher adoption of different kinds of therapies for treating diseases. The market is further segmented by applications into immunodeficiency diseases, hemophilia, hypogammaglobulinemia, Von Willebrand disease, oncology, transplant, hematology & others, out of which, immunodeficiency disease segment is estimated to hold dominant market share. Based on end-user, the market is sub-segmented into hospitals, clinics, research laboratories & others, out of which, the hospital segment is expected to hold the largest market share over the forecast period. 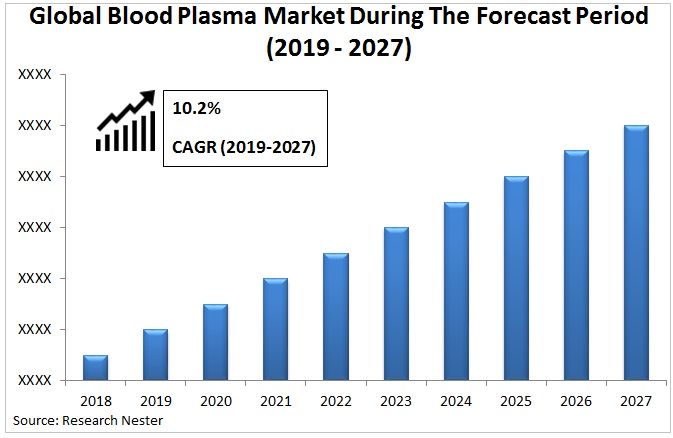 Further, high investment in the field of research and developments is also expected to augment the growth of the market.

In the Asia Pacific region, China is anticipated to be the fastest growing market on account of rising population base, increased focus on the healthcare sector and rising disposable income.

The global blood plasma market is further classified on the basis of region as follows: