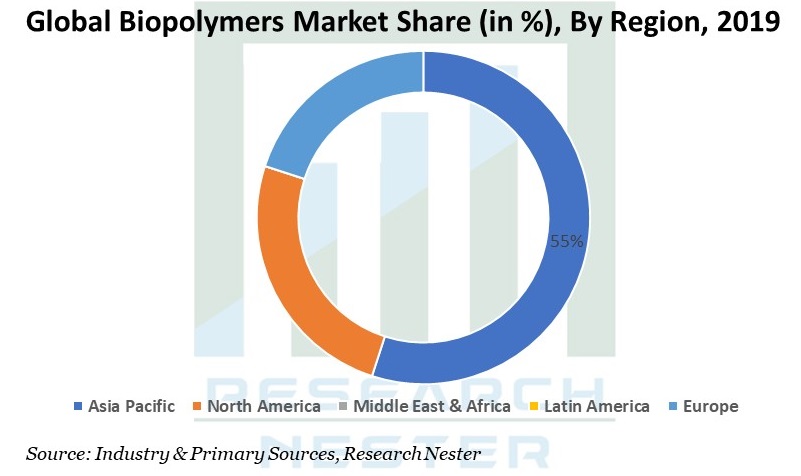 Increasing Consumption of Reusable and Recyclable Plastics for Packaging

The largest end-user for the plastics industry is the packaging sector. In Europe alone, 40% of the plastics consumed by packaging material manufacturers. However, this significant consumption of conventional plastics packaging showcases a significant impact on the global environmental condition with lot of plastic waste. In order to overcome this environmental disadvantage of conventional plastics, several governments coupled with the research and development (R&D) organizations produced biopolymers packaging, which can be bio-degradable or reusable or recyclable. Biopolymers use resources as efficiently as current conventional polymers, and have advantages including recyclable, reusable, bio-degradable, and releases less greenhouse gas emissions at the time of processing. According to European Bioplastics fact sheet 2019, global biopolymers packaging accounted for the 53% volume consumption in the total production of biopolymers. The major demand for this packaging comes from organic food wrapping and packaging of premium and branded products. Governments are anticipated to further contribute growing demand by promoting biopolymers packaging in the context of their policies for innovation, resource-efficiency, and climate change. The transition from a fossil-based economy to a bio-based economy is a major factor for the current and prospective future growth of the global biopolymers packaging market.

1) What are the major factors driving the growth of the biopolymers packaging market?

Ans: Increasing consumption of reusable and recyclable plastics for packaging in the packaging industry around the globe is one of the major factors that is driving the growth of the market.

2) What would be the CAGR of biopolymers packaging market over the forecast period?

4) Which region will provide more business opportunities for growth of biopolymers packaging market in future?

5) Who are the major players dominating the biopolymers packaging market?

7) What are the restraining factors for the market?

Ans: Concerns for the high cost of biopolymers over conventional packaging raw materials is one of the major factors anticipated to act as a barrier towards the growth of the market.