The bionic prosthetics & orthotics market is estimated to grow with a moderate CAGR during the forecast period, i.e., 2021-2029. Increase in geriatric population across the world, along with the growing investment in the development of advanced technologies are expected to fuel the progress of this market. The growth of the market can also be attributed to factors such as rise in prevalence of diseases such as vascular diseases, diabetes and osteoarthritis, increase in rate of road accidents and sports injuries amongst individuals on a global level. According to the data published by United Nations, the number of people aged 60 or over is anticipated to more than double by 2050, by 962 million in 2017 to 2.1 billion in 2050 across the world. 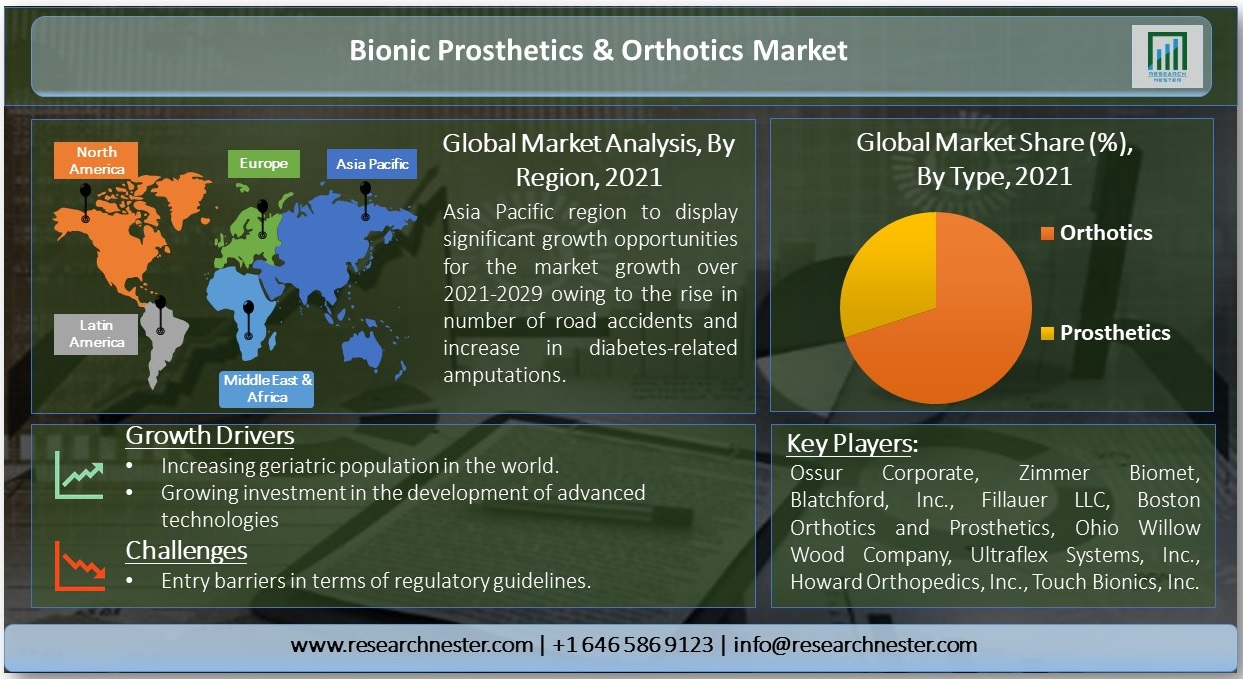 The market is segmented based on type into prosthetics and orthotics. The orthotic segment is further segmented into lower limb, upper limb and spinal orthotics. Prosthetics, on the other hand, includes upper extremity and lower extremity prosthetics, liners, sockets and modular components. The orthotics segment is anticipated to grab the largest share by the end of 2021 on account of increased prevalence of osteoarthritis and penetration of orthopaedic technology. Moreover, there has been an increase in the incidence of sports injuries, which is also projected to contribute to the growth of the segment during the forecast period. CLICK TO DOWNLOAD SAMPLE REPORT

On the basis of application, the general medical & surgical hospitals segment in the bionic prosthetics & orthotics market is projected to grow with a significant CAGR over the forecast period. The growth of the segment can be attributed to the fact that bionic prosthetic & orthotic implant is a relatively rare occurrence and as a result, a considerable portion of the population with this requirement on a global level tend to choose healthcare facilities specializing in its treatment.

Geographically, the market is segmented into North America, Latin America, Europe, Asia Pacific and the Middle East & Africa region. The market in the Asia pacific is predicted to grow at the highest CAGR over the forecast period due to rise in number of road accidents and increase in diabetes-related amputations. Furthermore, in 2021, the market in North America is evaluated to occupy the largest share in terms of revenue because of well-established and well equipped healthcare infrastructure and rise in research and development activities. Along with this, North America also leads in terms of favourable reimbursement policies, which is also expected to contribute to the market growth in the region. Alternatively, the market in Europe is also anticipated to occupy a significant share in the bionic prosthetics & orthotics market on account of technology advancements in the field of orthopaedic prosthetics design and growth in rate of manufacturing in the region. A recent project by European Agency for Safety and Health at Work (EUOSHA) found that the burden of work injuries is 3.30% of European GDP. 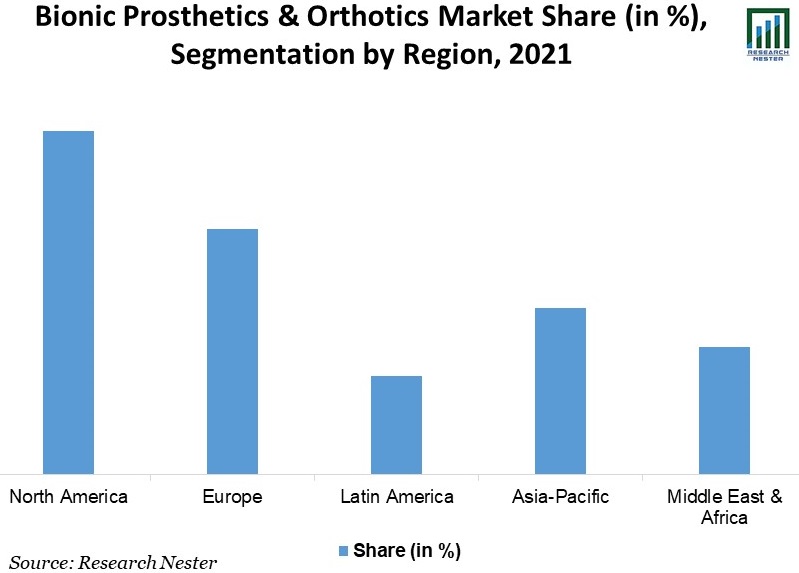 The bionic prosthetics & orthotics market is further classified on the basis of region as follows:

Our in-depth analysis of the bionic prosthetics & orthotics market includes the following segments:

1) What are the major factors driving the growth of the bionic prosthetic and orthotic market?

Ans: Increasing elderly population and growing investment in the development of advanced technologies are the key factors driving market growth.

2) What would be the CAGR of bionic prosthetic and orthotic market over the forecast period?

3) What are the challenges affecting the bionic prosthetic and orthotic market growth?

Ans: Entry barriers in terms of Regulatory Guidelines and Shortage of well-equipped rehabilitation centers are the challenges affecting the growth of this market.

4) Which region will provide more business opportunities for growth of bionic prosthetic and orthotic market in future?

5) Who are the major players dominating the bionic prosthetic and orthotic market?

7) What are the segments in the bionic prosthetics & orthotics market?

Ans: The market is segmented by type, application and region.

8) Which segment under the application segment captures the largest market size in the bionic prosthetics & orthotics market?

Ans: With respect to application, the general medical and surgery hospitals segment is anticipated to hold the largest market share as bionic prosthetic & orthotic implant is a relatively rare occurrence and as a result, a considerable portion of the population with this requirement on a global level tend to choose healthcare facilities specializing in its treatment.