The excessive use of traditional chemical fertilizers over the years has polluted the soil, damaged the environment and has adversely affected the quality of the agricultural products. This has further led to an increase of the planting cost. In order to reduce such nastiest circumstances, the people around the world are looking forward to adopt Bio-fertilizers as an ecofriendly agricultural solution.   Moreover, the consumers are increasing their expenditure on organic foods which is increasing the acceptance of high quality and branded bio-fertilizers. This growing acceptance is driving the manufacturers to develop and meet the demand for efficient Bio-fertilizers. The elevated pricing of chemical fertilizers along with rising promotion of bio-fertilizers by various government agencies is believed to fuel the expansion of the bio-fertilizers market with a compound annual growth rate of 14.2% over the period 2017-2024. Further, the global bio-fertilizers market is expected to garner USD 3,124.5 Million by the end of 2024 as compared to USD 1,106.4 Million in 2016. 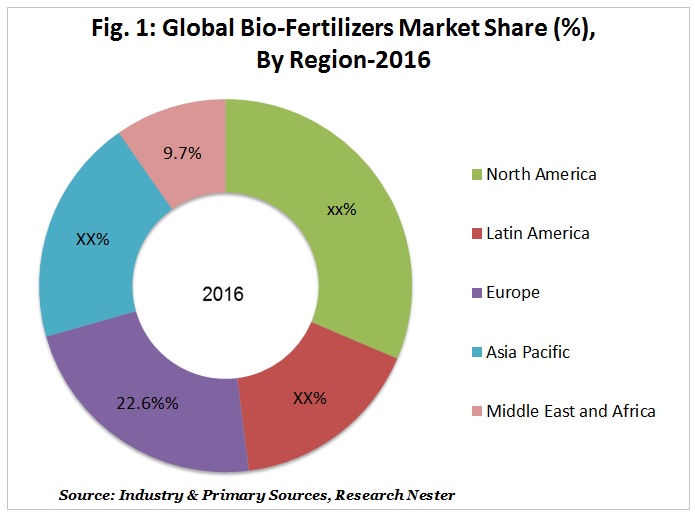 The global bio-fertilizers market is segmented on the basis of product type into nitrogen-fixing, phosphate-solubilizing, potash-mobilizing and others (zinc, boron or sulphur-solubilizing). Nitrogen-Fixing segment occupied the largest market of bio-fertilizers with 72.8% share in 2016 across the globe and is believed to account for highest revenue during the forecast period. After Nitrogen-Fixing, the phosphate-solubilizing segment is predicted to be the second largest market and is anticipated to achieve absolute $ opportunity of USD 301.4 Million between 2017 and 2024 owing to its contribution in root formation, plant growth and seed formation. Further, the potash-mobilizing segment is estimated to grow with highest CAGR over the forecast period. 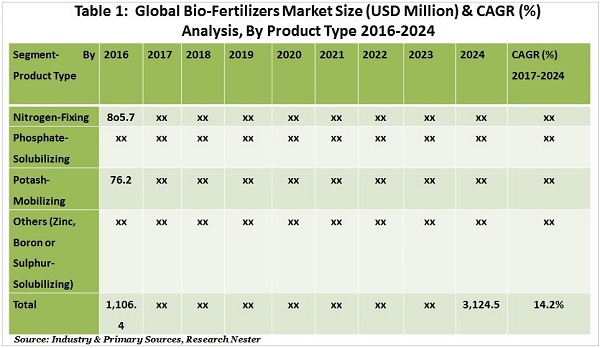 The global bio-fertilizers market is divided by microorganisms into azospirillum, cyanobacteria, phosphate-solubilizing bacteria, azolla, aulosira, rhizobium, azotobacter and others (Nostoc, Anabaena, Tolypothrix). Among these segments, cyanobacteria segment is predicted to dominate the bio-fertilizers market throughout the forecast period. This can be attributed to the features of cyanobacteria such as enhancing the soil fertility and reducing greenhouse gas emissions. Further, the Azospirillum and Azotobacter are believed to grow with highest CAGR over the forecast period, where the Azotobacter segment is forecasted to observe a growth rate of 2.6x over the forecast period. 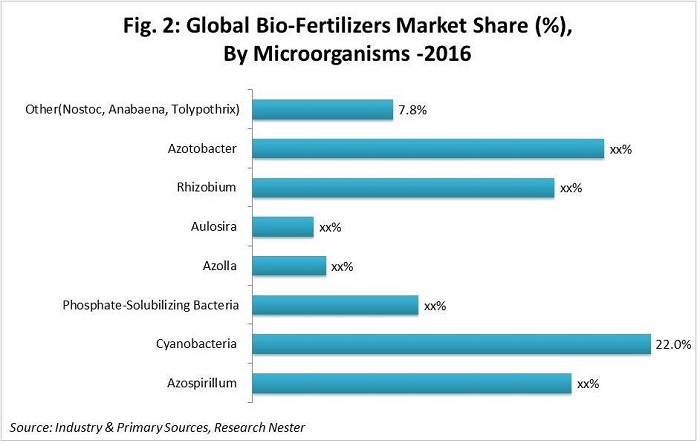 The bio-fertilizers market has been segmented by crops into cereals & grains, pulses & oil seeds, fruits & vegetables, fiber crops and others, out of which, the cereals and grains segment accounted for the highest revenue in 2016 and is believed to retain its dominant position by the end of 2024. Further, the pulses and oil seeds segment is expected to observe a positive growth rate over the forecast period owing to the adoption of effective fertilizers to fulfill nutrition requirement of crops by farmers across the world.

The bio-fertilizers market has been segmented by form into pure & mixed liquid fermentations, powder, dispersible granule and pellet. Among these segments, the pure & mixed liquid fermentation segment is believed to expand with highest CAGR over the forecast period owing to their longer shelf life, high enzyme activity, high commercial revenue and no loss of physical and chemical property in storage.

The bio-fertilizers market is segmented by application into seed treatment, soil treatment and root dipping. Among these segments, the seed treatment segment is predicted to dominate the market by expanding at a highest CAGR over the forecast period owing to their capability of increasing phosphorous content of soil by solubilizing it. Further, the root dipping segment is forecasted to observe a growth rate of 2.38x over the forecast period due to the demand for transplanted crops such as rice, ornamental plants and others.

The global bio-fertilizers market is thriving on the back of thriving agriculture sector with increasing demand and need for organic food and high agriculture yield. Further, the mounting prices of chemical fertilizers along with rising awareness towards the applications of eco-friendly products in farming are predicted to trigger the growth of the global bio-fertilizers market in upcoming years. Moreover, the governments of both developing and developed countries are taking various initiatives and initializing number of programs to boost the agriculture sector. Subsequently, increasing concerns regarding food security has also led the government to take initiatives to encourage the agriculture sector which in turn is fueling the demand for bio-fertilizers all across the globe.

Available land and water resources are declining in many developing countries. In addition to that, high additional farming cost associated with the adoption of bio-fertilizers is expected to harmfully impact the growth of the global bio-fertilizers market.