The global bioabsorbable stents market is estimated to garner a revenue of USD 592.1 Million by the end of 2030 by growing at a CAGR of 7.67% over the forecast period, i.e., 2021 – 2030. Moreover, in the year 2020, the market registered a revenue of USD 284.3 Million. The growth of the market can primarily be attributed to the growing incidences of cardiovascular diseases worldwide, and for the rising need amongst individuals to undergo a surgery to treat the condition. According to the statistics by the World Health Organization (WHO), in the year 2019, close to 17.9 Million people were known to die due to cardiovascular diseases (CVDs). This represented a share of 32% of the total number of deaths caused around the world in that same year. Furthermore, out of the total share of deaths caused due to CVDs, 85% of the deaths were known to be caused due to heart attack and stroke. 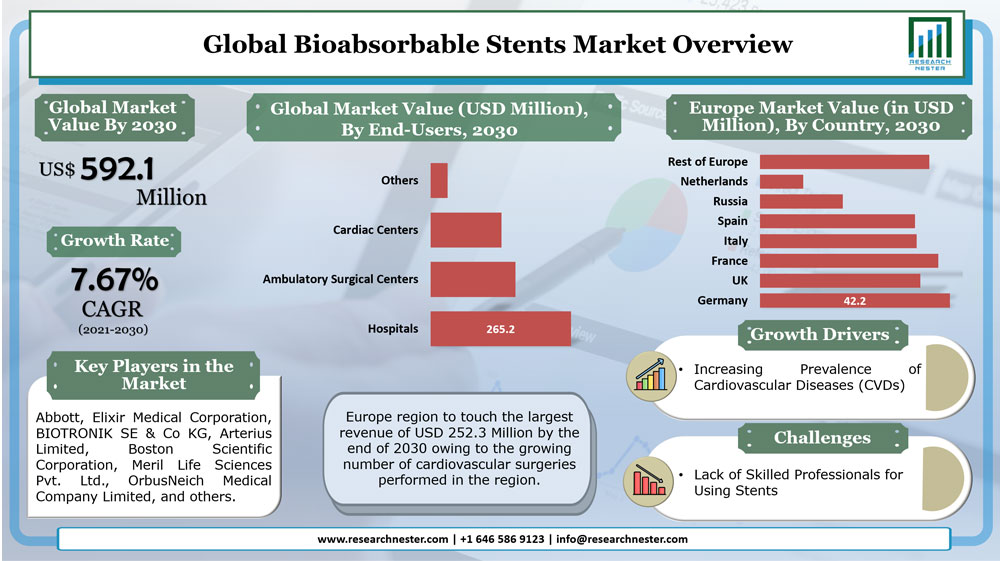 The growth of the market can also be attributed to the growing healthcare expenditure around the world, followed by the increasing utilization of bioabsorbable stents for other medical applications, such as for preventing urine retention during benign prostatic hyperplasia (BPH), for the management of tracheobronchial obstruction, as well as for its use in the esophagus and gastrointestinal tract as a minimally invasive alternative to surgery. Furthermore, the growing medical device industry, along with the supportive health initiatives of the government of nations worldwide, followed by the surge in the number of FDA approvals of different medical devices, are some of the additional factors expected to drive the market growth in the coming years.

Regionally, the global bioabsorbable stents market is segmented into five major regions including North America, Europe, Asia Pacific, Latin America and Middle East & Africa region. The market in Europe region is anticipated to garner the largest revenue of USD 252.3 Million by the end of 2030, up from a revenue of USD 129.6 Million in 2020. Despite the high prevalence rates of cardiovascular diseases in Europe, the number of deaths in the region has been on a declining trend. This can be attributed to the increasing number of cardiovascular surgeries performed in the region. According to the statistics by the statistical division, Eurostat, of the European Commission, in the year 2018, 10.4 Million in-patients with circulatory system diseases were discharged across the EU. Moreover, the number of transluminal coronary angioplasty surgical operations and procedures performed in Belgium, Germany, Croatia, and Austria increased from 227.0 (per 100,000 inhabitants), 385.9, 265.4, and 276.7 respectively in the year 2014 to 283.2, 419.5, 410.3, and 325.7 respectively in the year 2019. 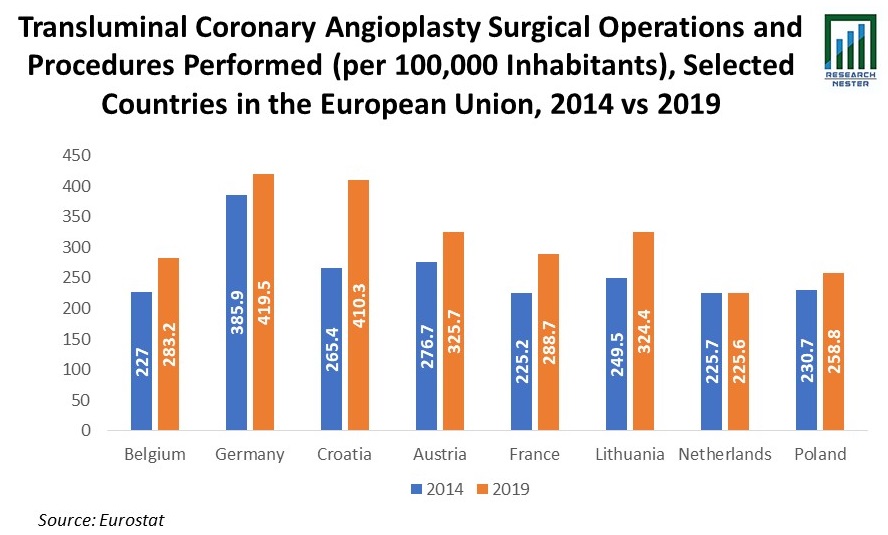 The market in the region is further segmented by countries into Germany, UK, France, Italy, Spain, Russia, Netherlands, and the Rest of Europe. Out of these, the market in Germany is expected to generate the largest revenue of USD 42.2 Million by the end of 2030, up from a revenue of USD 21.0 Million in the year 2020. On the other hand, the market in North America is anticipated to generate the second-largest revenue by the end of 2030, and also grow with the highest CAGR of 8.66% during the forecast period.

What are the major factors driving the growth of the bioabsorbable stents market?

The increasing prevalence of cardiovascular diseases (cvds) and the rising focus of the government of nations to facilitate advance healthcare infrastructure are some of the major factors anticipated to drive the market growth.

What would be the CAGR of bioabsorbable stents market over the forecast period?

What are the challenges affecting the bioabsorbable stents market growth?

The lack of skilled professionals for using stents and the availability of low-cost alternatives are estimated to hamper the market growth.

Which region will provide more business opportunities for growth of bioabsorbable stents market in future?

The market in Europe region is anticipated to garner the largest revenue of USD 252.3 Million by the end of 2030 and display significant business opportunities for market growth.

Who are the major players dominating the bioabsorbable stents market?

What are the segments in the bioabsorbable stents market?

The market is segmented by product type, absorption rate, application, end-users, and by region.

Which segment captures the largest market size in end-users segment in the bioabsorbable stents market?

The hospital segment is expected to touch USD 265.2 Million by the end of 2030 and display significant growth opportunities.