The global car market is brightly focusing on autonomous vehicle sector which will boom in the near future with their tremendous & advanced facility along with latest customer satisfaction method. The consumer comfort is the first priority for the vehicle segment. Moreover, the growing awareness among consumers regarding the benefits of autonomous cars, such as the enhanced mobility, is projected to fuel the demand for autonomous cars in the years to come. The regulatory concerns, however, may hinder the growth of this market. The global automakers are focusing on the driverless car because of the immense traffic problem which could save money and time, and to remain competitive in the future.

Autonomous Car Market is predicted to reach USD 127.01 Billion by 2027 at the CAGR 38.6%. The Base year is considered here is 2017 Autonomous car market report, and the forecast period is between 2018-2027. The Autonomous car market system is projected to reach at a notable valuation by the end of forecast period. The growth of the autonomous cars market is driven by factor such as the necessity to safeguard individual as well as property from rapidly evolving threats, consumer awareness is increasing as well as accidental concerns, willingness to pay for the system, adoption to variety of new technology, systematic approach in the vehicle industry.

Global autonomous cars market is further classified on the basis of region as follows: 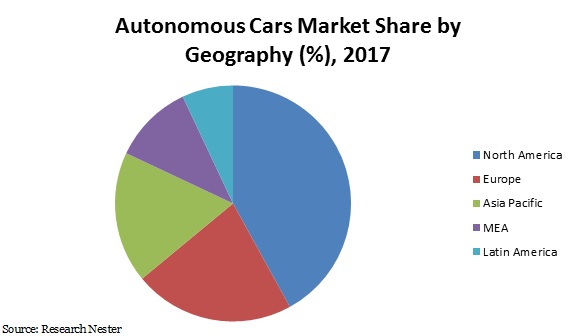 The growth of the market is primarily driven by the adoption of the driverless car in the populated cities of the world namely Los Angles, Beijing, Tokyo, New York and London due to the increasing ownership of smaller homes. Further, the rapid pace of urbanization and growth in the automotive industry influence the driverless car industry. In U.S. the growing trend towards the modern lifestyle of automotive sector is observed among the population who have a preference for affordable, sedan and compact car that suits their changing lifestyles. Moreover, the automotive car manufacturers are trying to cater to the metropolitan lifestyle of the consumers and are adding appealing features to the cars. Therefore, the manufacturers in order to meet the rising needs of the consumers are diversifying their product portfolio to include features that are aesthetically appealing and provide comfortable rides, and thus supplement the growth of the global autonomous car market. However, the market growth is hampered by the rising prices of the raw materials such as graphics, photographic lenses and advanced hardware. In addition, the rising cost of fuel is also negatively affecting the demand for autonomous cars in the U.S. and China.

The Autonomous Car market is expected to grow at a higher pace in America, Asia Pacific and Europe. The industry in USA would be driven by the growth in population and in Asia Pacific too. As for the Europe, the Driverless Car is gaining popularity through online sources, which has led to the expansion across the region. However, the offline channels will dominate the market, while the online channel will grow at a significant CAGR during the forecast period.