The autoimmune disease drugs market is anticipated to record a CAGR of around 5% over the forecast period, i.e., 2020-2028. The market is segmented by drug, by disease, by distribution channel and by region. Based on disease, the market is segmented into rheumatoid arthritis, type 1 diabetes, multiple sclerosis, psoriasis, lupus, inflammatory bowel disease and others. The high prevalence of rheumatoid arthritis globally can be attributed to the significantly high share of this segment in the market over the next few years. On the basis of drugs, the market is segmented into NSAIDs, anti-inflammatory, interferons, antihyperglycemics and others, out of which, the anti-inflammatory segment is anticipated to hold the largest share in the autoimmune disease drugs market on account of their application in large number of indications such as rheumatoid arthritis, juvenile idiopathic arthritis, gout, psoriasis, ankylosing spondylitis and others. XELJANZ, a drug for oral use manufactured by Pfizer and approved by the U.S. FDA in 2012, aimed at treating both rheumatoid arthritis and psoriatic arthritis among adult patients having an inadequate response to methotrexate. CLICK TO DOWNLOAD SAMPLE REPORT 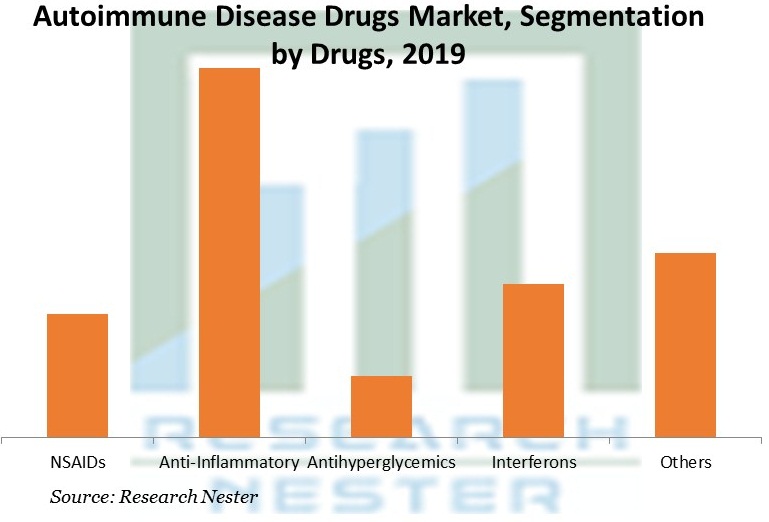 Recently, a few autoimmune disease drugs have received approvals for sale in the market. For instance, RITUXIN is a drug manufactured by Genentech, which received FDA approval for the treatment of rheumatoid arthritis. Various other drugs are still in the clinical trials stage and observing positive results. This is anticipated to become a major factor for the growth of autoimmune disease drugs market over the forecast period. The increasing research and development in the area of autoimmune disease is predicted to lead to more drug approvals in future.

Rising Awareness about Autoimmune Disease to Boost the Market Growth

Growing prevalence of various autoimmune diseases poses a high risk to individuals, especially the elderly population. Rheumatoid arthritis is an autoimmune disease in which the immune system attacks the joints in the body, commonly those in hands, knees and wrists. This causes inflammation in the affected body part and inhibits normal body functioning. According to Centers for Disease Prevention and Control, around 22.7% or 54.4 million adults in America had doctor-diagnosed arthritis as per the National Health Interview Survey 2013-3015, with a higher prevalence in women (23.5%) than in men (18.1%). The growing demand for reducing the effects of this disorder is anticipated to result in growth of the market.

High Cost Of Treatment To Restrict The Market Growth

Our in-depth analysis of the autoimmune disease drugs market includes the following segments: 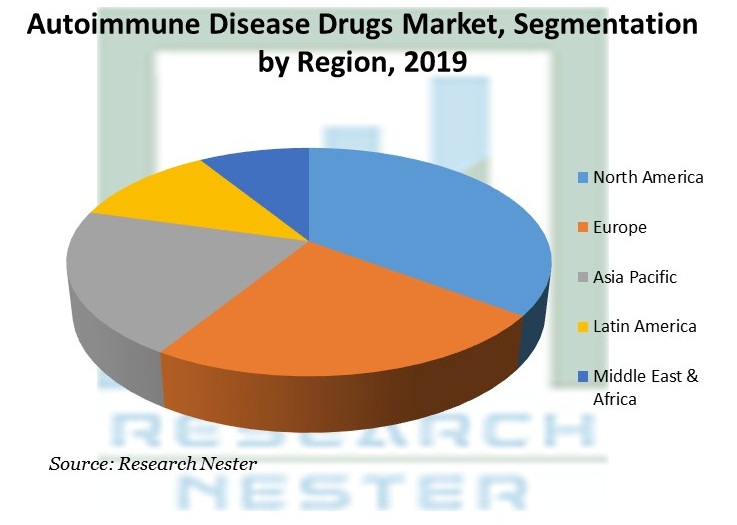 The autoimmune disease drugs market is further classified on the basis of region as follows:

What are the major factors driving the growth of the Autoimmune Disease Drugs market?

Improvements in government regulations for drug approval procedures that result in higher number of drugs in the market is a major factor that is driving the growth of the market.

What would be the CAGR of Autoimmune Disease Drugs market over the forecast period?

Which region will provide more business opportunities for growth of Autoimmune Disease Drugs market in future?

Significantly improving healthcare infrastructure and development of better treatment facilities in Asia Pacific region are anticipated to provide more business opportunities for the growth of the market in the future.

Who are the major players dominating the Autoimmune Disease Drugs market?