Audio Sunglasses are those sunglasses which offer augmented reality capabilities, apart from protecting the eyes from any form of damage caused by sunlight. These sunglasses are fitted with built-in tiny speakers attached to the arms in order to enable the user to enjoy a smooth audio experience such as listening to music and so on. Another feature of these audio sunglasses is that the audio content can be heard only by the user who is wearing these sunglasses.

The audio sunglasses market is anticipated to grow at a modest CAGR over the forecast period, owing to the devices being expensive, even though they possess multiple features and can be utilized for various activities such as listening to music and various other audio updates, including making and receiving calls through the press of a button in these audio sunglasses. The market is segmented by frames into alto and rondo, by lenses into polarized and non-polarized lenses, by application into elderly, adults and teenagers, by model into bluetooth and bone conduction and by distribution channel into online and offline. The online segment that forms part of distribution channel is estimated to attain the highest market share, owing to the increase in the working population that are preferring to transact online, owing to the benefits received by them in the form of discounts, messages, delivery status that can be checked online and home delivery of the products that has made it easier to operate for the individuals as compared to conducting transactions through offline retail stores. The adult population falling under the application segment is anticipated to witness the highest demand, owing to the presence of a huge working population with huge disposable incomes and their desire to own high end products that are tech driven which will provide comfort to the user.

There is a greater awareness among consumers as compared to the earlier generation about the ill-effects of harmful radiations caused by sun and the need to protect themselves from its harmful effects. There is also a growing preference among the general population, especially the large working population to own high end tech driven devices that possess multiple features and can perform a variety of functions. The feasibility provided by smartphones and other smart devices for performing several tasks by the use of an app is driving the demand for these products among the consumers globally. Besides, growing disposable incomes of the population and the fashionable trend set by these sunglasses among the young urban population is anticipated to boost the demand for these products and drive the growth of the market over the forecast period. DOWNLOAD SAMPLE REPORT HERE

Audio sunglasses are capable of performing multiple functions, apart from acting as a protective eyewear that can protect from bright sunlight causing discomfort to the eyes of the user. These audio sunglasses are offering the option for the user to access Siri or Google assistant, control music using these sunglasses, stay free of any ear buds or headphones while listening to the audio, as it has the presence of built-in sensors and a pair of hidden speakers that enables the user to enjoy the sound coming from these sunglasses. Moreover, the audio sunglasses can perform tasks such as taking and receiving calls by the press of a button in these sunglasses besides playing music. With growing demand for products that contain several features which helps the consumer to use the products for multiple purposes by using the app of a smartphone or smart device, the audio sunglasses market is anticipated to observe robust demand and grow at a significant pace over the forecast period.

Audio sunglasses possess a limited battery life and are considered to be slightly expensive for the general population, as these sunglasses are primarily targeted towards high-end consumers who are having high disposable incomes. Besides, presence of huge number of unorganized market players who can cover a considerable portion of the market by sale of duplicate products and data privacy and security concerns could limit the demand for these sunglasses, thereby restraining the growth of the market over the forecast period.

On the basis of regional analysis, the audio sunglasses market is segmented into five major regions including North America, Europe, Asia Pacific, Latin America and Middle East & Africa region. The market in North America is anticipated to observe the highest growth, owing to the presence of leading manufacturers in the region who are also bringing in new innovations to the products and the presence of a huge working population that fancy fashionable and trending products which possess multiple utilities and high disposable incomes of the population that is predicted to drive the growth of the market over the forecast period. The market in European region is anticipated to grow significantly, owing to the high disposable incomes of the population, while Asia Pacific region is predicted to grow at a moderate rate, owing to the presence of a huge working population with disposable incomes and a growing young urban population who are more attracted to owning products that can be controlled with smartphones or smart devices. 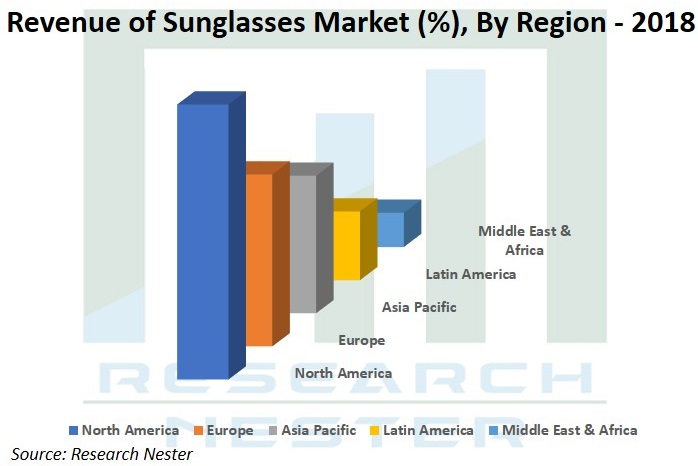 The audio sunglasses market is further classified on the basis of region as follows:

Animal Safety Devices Market Segmentation by Technology (RFID, GPS, Sensors, and Others); and by Application (Diagnostics, Facilitation and Safety, Identification and Tracking, and Others) – Global Demand Analysis and Opportunity Outlook 2030

Anti-Drone Market Segmentation by Technology (Kinetic, Laser, and Electronic System); by Application (Detection, Detection & Disruption, and Others); by End User (Commercial, Defence, and Others) and By Type (Hand-Held, UAV-Based, and Ground-Based) - Global Demand Analysis & Opportunity Outlook 2030