The global anti-venom market is estimated to garner notable revenue by growing at a CAGR of ~7.5% over the forecast period, i.e., 2022 – 2030. The growth of the market can be attributed to the rising technological innovation in the treatment for venomous bite, along with the increasing investment in development of new drugs. Moreover, the growing incidences of snakebites across the globe, is anticipated to further boost the market growth. According to the data by the World Health Organization (WHO), around 5.4 million people are bitten by snakes each year. Moreover, up to 2.7 million people are envenomed yearly. This has resulted in a very high demand for anti-venoms, which is estimated to drive the market growth. Along with this, the government concerns to reduce deaths caused by envenoming, and initiatives to produce novel anti-venoms, are projected to boost the market growth. However, several challenges lie with the production of anti-venoms as several countries around the globe do not have regulatory norms to control and monitor the production of these anti-venoms. 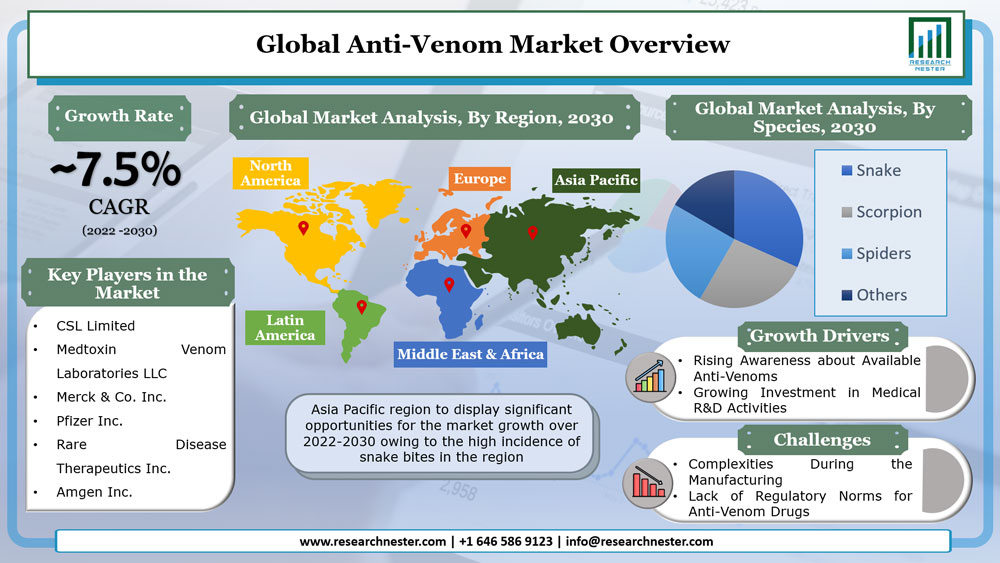 Regionally, the global anti-venom market is segmented into five major regions including North America, Europe, Asia Pacific, Latin America and Middle East & Africa region. The market in Asia Pacific region is estimated to witness noteworthy growth over the forecast period on the back of growing cases of snakebites, which require anti-venom for treatment. According to the data by the WHO, up to 2 million people are envenomed by snakes each year in Asia. Moreover, the improving healthcare sector is estimated to fuel the market growth. The market in the North America is estimated to gain significant share over the forecast period owing to the presence of major pharmaceutical companies in the region manufacturing anti-venoms. Moreover, the high awareness amongst the people in the region for the availability of such drugs is expected to boost the market growth.

The global anti-venom market is further classified on the basis of region as follows:

Our in-depth analysis of the global anti-venom market includes the following segments:

1) What are the major factors driving the growth of the anti-venom market?

Ans: Technological innovation in the treatment for envenoming, and rising awareness about available anti-venoms, is estimated to boost the market growth.

2) What would be the CAGR of anti-venom market over the forecast period?

3) What are the challenges affecting the anti-venom market growth?

Ans: Absence of any regulatory measures for manufacturing anti-venom is estimated to hamper the market growth.

4) Which region will provide more business opportunities for growth of anti-venom market in future?

Ans: The market in the Asia Pacific region is projected to provide more growth opportunities over the forecast period, owing to the high incidence of snake bites and other venomous bites in the region.

5) Who are the major players dominating the anti-venom market?

7) What are the segments in the anti-venom market?

Ans: The market is segmented by species, anti-venom type, and by region.

8) Which segment captures the largest market size in species segment in the anti-venom market?

Ans: The snake segment is anticipated to hold largest market size over the forecast period and display significant growth opportunities.