Obesity is a condition which is caused by the presence of excessive fat in the body. This eventually leads to the development of various health disorders such as diabetes, cardiovascular disease and other physical disabilities. Anti-obesity drugs are medications aimed at reducing and controlling the body weight. They act by either changing the patient’s appetite or by lowering the calories absorption. These drugs can be sold as over-the-counter drugs as well as prescription drugs. 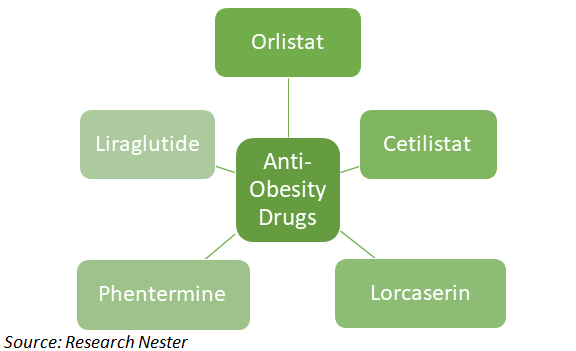 Rising Awareness among People about Obesity to Drive the Market Growth

As per the statistics by Centers for Disease Control and Prevention, around 66.7% of obese adults over the age of 20 tried to lose weight between 2013 and 2016. A large majority of the population is becoming health conscious and adopting healthier lifestyles. Further, the various health disorders linked with excessive body fat such as cancer, diabetes, cardiovascular disease and others anticipated to increase the demand for these drugs. The growing awareness among people about the health concerns related with obesity are estimated to substantially raise the growth of anti-obesity drugs market.

The rising consumption of packed and unhealthy food results in the accumulation of fat and cholesterol in the body. Moreover, lack of any physical activity further worsens the health and leads to obesity. The various measures taken by people to reverse these habits and eliminate them is estimated to be a major driving factor for the market growth.

Side-Effects of Anti-Obesity Drugs to Hamper the Market Growth

Anti-obesity drugs might cause side-effects including stroke, mental illness and other undesired health conditions. As a result of this, several previously approved drugs have been withdrawn and replaced with much safer drugs. This is estimated to limit the market growth in the upcoming years.

Our in-depth analysis of the anti-obesity drugs market includes the following segments:

By Mechanism of Action

Obesity is a highly prevalent condition in the United States. On the back of this, the anti-obesity drugs market in North America is anticipated to hold the largest share in the market over the forecast period. Moreover, with high healthcare expenditure in the region and growing approval of anti-obesity drugs by the U.S. Food and Drug Administration (FDA), the market is predicted to flourish in North America. The market in Europe is estimated to hold the second largest share as a result of growing prevalence of obesity on account of unhealthy lifestyle and bad food habits. On the other hand, the market in the Asia Pacific region is predicted to be highly lucrative and grow at the highest rate during the forecast period on account of growing incidences of diabetes and other such disorders which are associated with obesity. 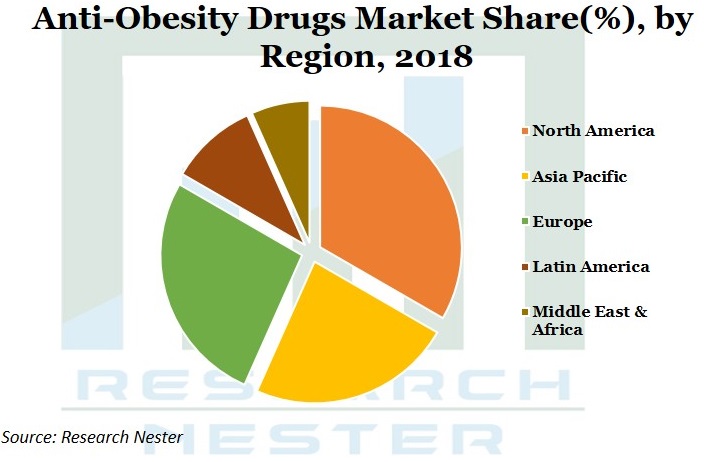 The anti-obesity drugs market is further classified on the basis of region as follows: