Many countries of the world are prone to the risk of malaria transmission which has driven large number of partners and resources to rapidly increase malaria control efforts and efficient management strategies such as prevention control, resources for early diagnosis and efficient anti-malaria drugs to minimize the effects. The worldwide demand for anti-malaria drugs is increasing on the back of massive growth of healthcare industry across the globe. Further, increasing awareness about early symptoms, constant monitoring and easy availability of therapeutics is predicted to benefit the expansion of the global anti-malaria drugs market with a CAGR of 3.2% over the forecast period i.e. 2018-2027. The global anti-malaria drugs market accounted for USD 742.5 Million in 2016 and is predicted to reach USD 1,049.5 Million in 2027. The market is expected to grow with a Y-O-Y growth rate of 3.4% in the year 2027.

Growth Highlights based upon Regional Platform during 2016-2027 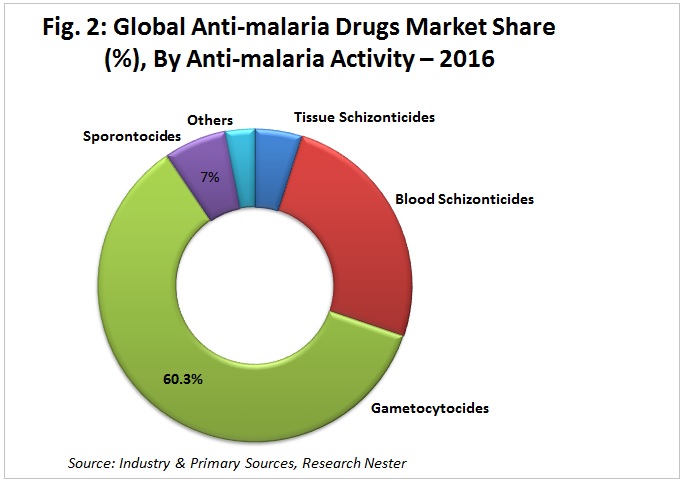 The global anti-malaria drugs market is divided by drug chemistry into aryl amino alcohols, 4-aminoquinolines, folate synthesis inhibitors, 8-aminoquinolines, antimicrobials, peroxides, napthoquinones, iron chelating agents and others. Among these segments, the 4-aminoquinolines segment is estimated to capture the highest market share during the forecast period. This segment contributed around 26% market share of the total anti-malaria drugs market in 2016 and is projected to achieve Y-o-Y growth rate of 3.7% in 2027 as compared to previous year. Further, the 8-aminoquinolines and napthoquinones segment are estimated to grow significantly over the forecast period.

The global market of anti-malaria drugs market is segmented by distribution channel into hospital pharmacy, retail pharmacy and others, out of which, the retail pharmacy segment contributed around 60% market share of the total anti-malaria drugs market in 2016 and is estimated to remain highest during the forecast period by expanding at a highest CAGR of 3.4% during the period 2018-2027. Further, hospital pharmacy segment is projected to achieve Y-o-Y growth rate of 3.3% in 2027. 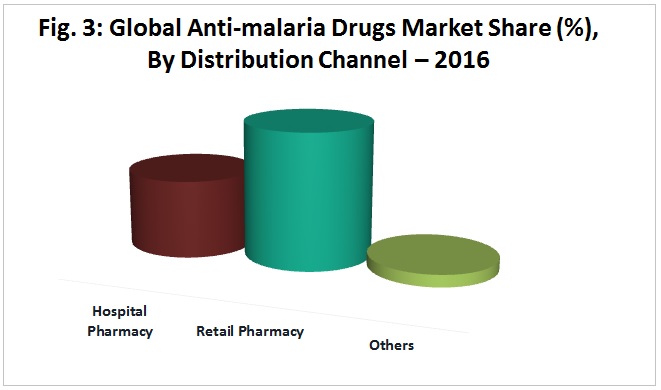 The global anti-malaria drugs market is thriving on the back of growing rate of malaria effected fatalities around the globe. According to World Health Organization, in 2016, nearly half of the world's population was at risk of malaria. Also, most malaria cases and deaths occur in sub-Saharan Africa. In 2016, 91 countries and areas had ongoing malaria transmission as reported by W.H.O. The increasing prevalence of malaria due to changing environmental conditions, as well as increasing poverty in certain parts of the world is predicted to increase the demand for anti-malaria drugs over the forecast period.