Allulose, also known as D-Psicose or D-allulose, is a monosaccharide sugar with the molecular formula C6H12O6. This low-calorie sugar is estimated to have around 70% sweetness of sucrose along with a cooling sensation and is not bitter. Allulose is widely used as an artificial sweetener, especially in the manufacturing of ice-creams, confectionary and others, as the sugar is known to exhibit similar physical properties to that of a regular sugar. First discovered in the 1940s, allulose is now found naturally in trace amounts in wheat, fogs, molasses and others, and can also be produced in a massive scale by the conversion of fructose using an enzyme D-tagatose-3epimerase. 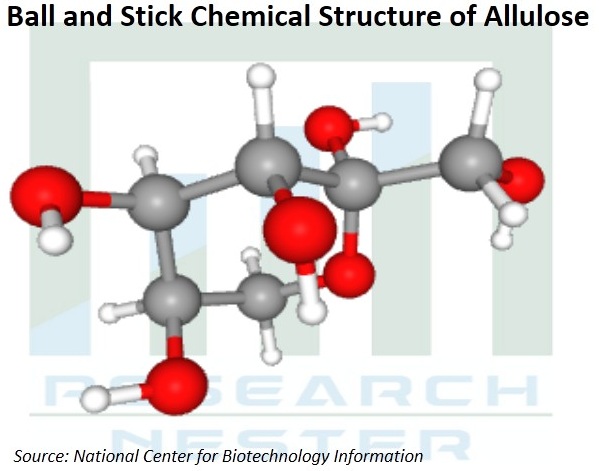 The global allulose market is thriving on the back of growing advancement in the food industry and the increasing demand for new ingredients from food manufacturers that reflect emerging nutrition science. Backed by the continuous evolvement of nutrition science along with the increasing investments in new technologies by food scientists, the need for food products that deliver both great taste and nutritional benefits have increased manifold across manufacturers in the food industry.

The global allulose market is anticipated to record a robust CAGR throughout the forecast period, i.e. 2020-2028. The market is segmented by application into bakery, confectionary, diary, food, therapeutic food, pharmaceuticals and others, out of which, therapeutic food segment is anticipated to hold the largest market share on the back of increasing demand for ready-to-use therapeutic food (RUTF) worldwide, especially by governmental institutions such as United Nations International Children’s Education Fund (UNICEF), which is known to procure a major share of the total RUTF produced worldwide. According to UNICEF, it procures nearly 75-80% of the global demand for RUTF a year, which includes 30-35k metric tons (MT) of RUTF paste, suitable to treat around 2.1-2.5 million children. CLICK TO DOWNLOAD SAMPLE REPORT 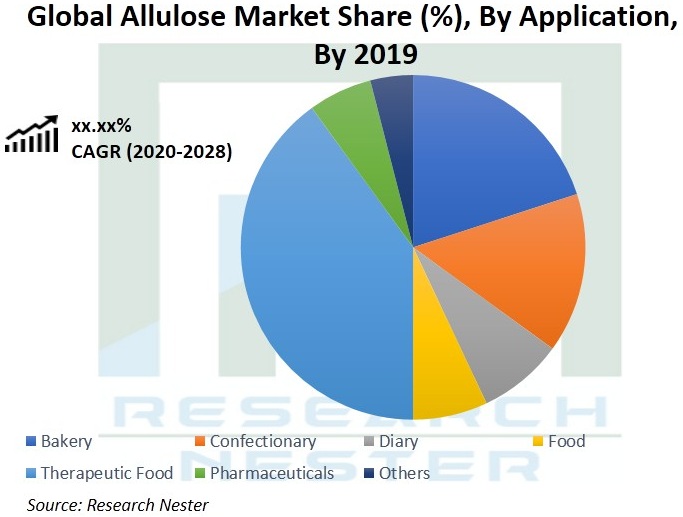 According to Diabetes Research Institute Foundation, around 1.5 million new cases of diabetes were diagnosed among U.S. adults who were aged 18 years or older in the year 2018.

Consumption of high calorie sugar regularly impacts the health negatively and can lead to obesity or even diabetes. The imbalance in the consumption of food and the resulting imbalanced energy derived post digestion of such consumed food, elevates the risk of heart diseases, high blood pressure, stroke, nonalcoholic fatty liver disease and other health diseases. Consumers in the recent era are looking to foods that are healthy, such as health snacks, on the back of growing emphasis on health and the need to manage the total amount of calories consumed overall. A low-calorie sweetener has several benefits over high calorie sweetener, such as, it does not increase blood glucose and insulin levels, has good digestive tolerance at approved usage levels, does not promote tooth decay, and others, which is raising the demand for its utilization in foods and are well supported for consumption by many dieticians around the world. The increasing awareness amongst individuals around the globe for the consumption of low-calorie sugar and the benefits associated with the consumption of such sugar types is thereby anticipated to drive the growth of the global allulose market during the forecast period.

With the rising demand from consumers for healthy foods, food manufacturers around the globe are increasingly emphasizing to develop food products that provide both the benefits of health as well as meet the correct taste. Allulose is known to have an energy of around 0.2kcal/g and is also known to improve temporal profile with similar upfront sweetness like sucrose. Moreover, allulose also tastes similar to sucrose and has almost the same structure. As a result, food manufacturers across end user industries, such as bakery, confectionary, diary and others have started using allulose in the manufacturing of their food products as it can also synergize itself with other sweeteners. In the baking industry, allulose also provides the bulk, browning, caramelization and texture which is found in other sweetener types. Owing to such factors, there is a rising demand for the application of allulose from end user industries, which is anticipated to promote the growth of the global allulose market in the upcoming years.

Restrictions For Use in Few Nations

Although the use of allulose in industries is growing massively in many nations around the world, yet there are restrictions to its utilization in nations such as Europe, where the consumption of the sugar is claimed to pose a safety risk to human health. Such a factor might hamper growth of the market in Europe region and thereby the sales of the manufacturer, which is anticipated to act as a restraint factor to the growth of the global allulose market throughout the forecast period.

Our in-depth analysis of the global allulose market includes the following segments:

North America is anticipated to hold the largest market share on the back of support from the U.S. Food and Drug Administration (FDA), which has provided the Generally Recognized As Safe (GRAS) notification to the sugar and has also exempted the sugar from the Total or Added Sugar listing on the Nutrition Facts label. Moreover, rising awareness for the consumption of healthy foods amongst the consumers in the region, along with the increasing demand from end user industries is anticipated to drive the growth of the allulose market in the region during the forecast period.

The global allulose market is further classified on the basis of region as follows: