The global alkylene oxides and glycols market is estimated to garner a large amount of revenue by growing at a CAGR of ~4% over the forecast period, i.e., 2022 – 2031. The growth of the market can be attributed largely to the increasing usage of PET bottles, and rising sales of automobiles around the world, where the chemicals are used for making seat belts. It is calculated that more than 580 billion units of PET bottles will be produced by the end of 2021, up from about 480 billion units in 2016. Along with these, ethylene oxide is a low-temperature disinfectant, and is heavily applied to sterilize medical devices and healthcare products such as bandages and ointments. This is expected to be another factor driving market growth in the upcoming years. Furthermore, growing demand among consumers for better packaged food globally is projected to offer profitable opportunities to the market in the near future. 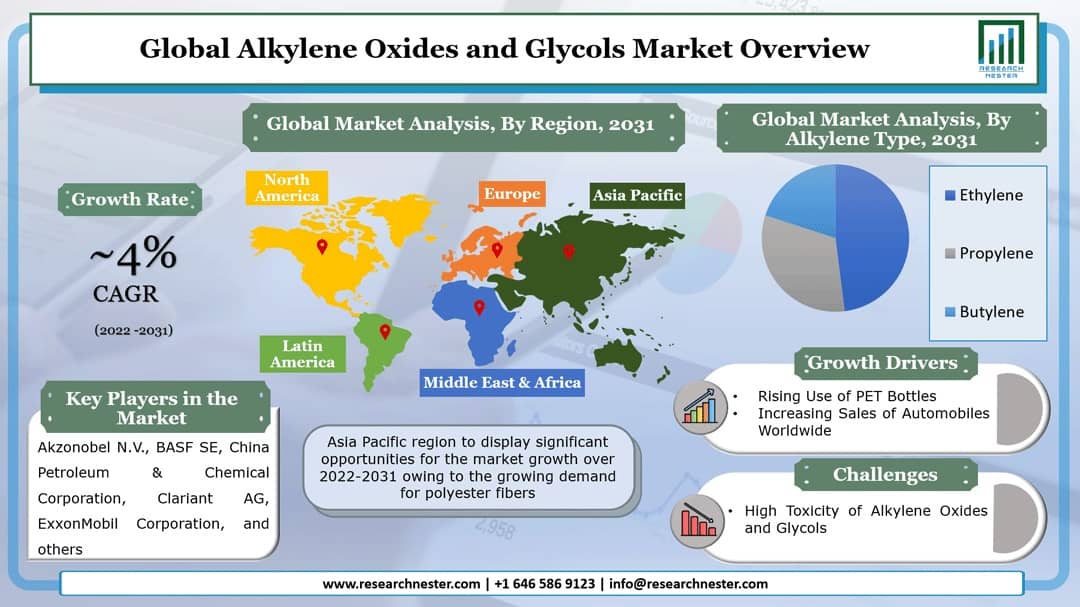 The market is segmented by end use into plastics & polymers, cosmetics & personal care, chemical & pharmaceutical, detergents, and others, out of which, the plastics & polymers segment is anticipated to hold the largest share in the global alkylene oxides and glycols market. This can be accounted to the high utilization of plastics around the world, coupled with the indispensable role of ethylene glycol in plastic manufacturing. Apart from these, rising use of alkylene oxides and glycols for making polyester fibers and films is also predicted to boost the growth of the market segment in the future. Additionally, on the basis of alkylene type, the ethylene segment is assessed to grab the largest share during the forecast period owing to the increasing utilization of ethylene oxides and glycols in commercial and industrial applications as an antifreeze and coolant.

Regionally, the global alkylene oxides and glycols market is segmented into five major regions including North America, Europe, Asia Pacific, Latin America and the Middle East & Africa region. The market in Asia Pacific is estimated to witness noteworthy growth and garner the largest share over the forecast period on the back of the huge demand for polyester fibers in China and India. In addition, high manufacturing output, and rapidly growing urbanization and industrialization are also expected to drive the market growth in the region in the coming years. According to the United Nations, the level of urbanization in Asia was approximately 50 percent in 2018. By 2050, India and China will have added 416 million and 255 million urban dwellers to their populations. Moreover, the market in Europe is also projected to occupy a significant market share during the forecast period ascribing to the presence of major automobile manufacturers, and surging PET resin industry in the region. 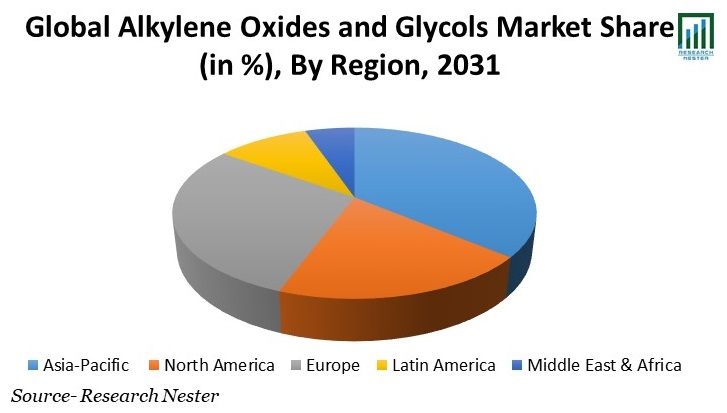 The global alkylene oxides and glycols market is further classified on the basis of region as follows:

Our in-depth analysis of the global alkylene oxides and glycols market includes the following segments:

What are the major factors driving the growth of the alkylene oxides and glycols market?

The major factors driving market growth are increasing usage of PET bottles, and rising sales of automobiles around the world.

What would be the CAGR of alkylene oxides and glycols market over the forecast period?

Which region will provide more business opportunities for growth of alkylene oxides and glycols market in future?

Asia Pacific will provide more business opportunities for market growth owing to the huge demand for polyester fibers in China and India.

Who are the major players dominating the alkylene oxides and glycols market?

What are the segments in the alkylene oxides and glycols market?

The market is segmented by alkylene type, end use, and by region.

The ethylene segment is anticipated to hold largest market size and is estimated grow at a notable CAGR over the forecast period and display significant growth opportunities.

High toxic content of alkylene oxides and glycols is estimated to hamper the market growth.