The flap is a movable part of the wing which is used to produce lift. A plain flap increases the maximum lift when required - during takeoff or landing. The lift increases with an increase in the flap deflection. When it is lowered, it re-shapes the wing section to give it more camber which allows the aircraft to generate lift at a relatively low speed. Spoilers are the devices used to efficiently distribute and streamline airflow over the wings. They are responsible for obtaining low static areas upon the wings which increases the production of the lift. Slats and Slots are the small devices installed at the wing leading edge ahead to enable the flow of air between slat and wing slot over the wing at high (AOA) acquisition-only authority. Slates energize air by using the kinetic energy from below the wing to the airflow on top.

The demand for air transport is rising as the fare rates are getting cheaper and global connectivity is increasing. Specialized innovations are being done in the aircrafts and fighter jets for military and naval applications to strengthen the country’s defense forces. These specialized innovations are expected to boost the market growth. After the increase in global economic status, people have started using more of air transport which is expected to boost the market growth. Both the commercial aviation and as well as the military aviation sector have rapidly increased the usage of unmanned aerial vehicles for the examination purpose seeing which the aircraft lift device manufacturers are incorporating enhanced and latest flight control systems to perform better.

The aircraft lift control device market is anticipated to record a CAGR of around 8% during the forecast period i.e. 2019-2027. The market is segmented by aircraft type, product type, wing type & application, out of which, the commercial aviation segment is anticipated to have significant growth on account of increasing demand of air transport. CLICK TO DOWNLOAD FREE SAMPLE 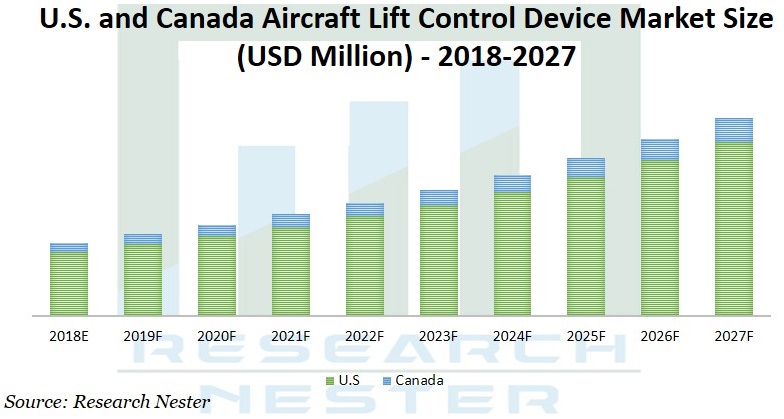 After the increase in global economic status, people have started using more of air transport which is expected to boost the market growth.

Global use of unmanned aerial vehicles for examination purpose

Both the commercial aviation sector as well as the military aviation sector have rapidly increased the usage of unmanned aerial vehicles for the examination purpose seeing which the aircraft lift device manufacturers are incorporating enhanced and latest flight control systems to perform better. This global use of unmanned aerial vehicles for examination purpose is expected to expand the market growth.

The aircraft manufacturers are not able to deliver the aircrafts at the given delivery dates, sometimes creating backlogs of aircraft deliveries. Due to existing backlogs even, the new deliveries get late, thereby creating new backlogs which can hamper the growth of the market.

North-America is expected to lead the aircraft lift control device market on the back of relatively cheap costs, consumer benefit as its first priority and innovative aviation technology in fighters, jets and bombers. Europe holds the second spot on the back of the presence of leading market players, liberalization of services and cheap airline travel fares. Asia-Pacific is expected to witness significant growth on the back of increasing number of airports and decreasing airline fares.

The aircraft lift control device market is further classified on the basis of region as follows: