June 16th, 2017: Kilfrost Limited and Eastman Company announced a soft solution for winter icing problem. The companies have developed fast acting range of liquid and solids in order to provide comprehensive solutions with safety as well as proper ice protection.

De-icing is a type of process which is used to remove snow, ice or frost from the aircraft surfaces. In order to prevent the formation of ice, chemicals are applied for de-icing on the surface of the aircraft. For de-icing, type I fluid is applied on the surface of the aircraft in order to remove the accumulated snow or ice. After the type I fluid application, the type IV fluid, known as anti-icing, is sprayed on the aircraft in order to assist in the prevention of re-accumulation of ice or snow before the flight takes off. De-icing fluids consist of a glycol water solution which contains dye and agents so as to protect the metal surface. Thickeners are also used to help the de-icing agent to stick fast to the airplane body.

The global market growth for aircraft de-icing is increasing rapidly owing to the growth in air passenger traffic as well as subsequent demand for modernization, new aircrafts and expansion of existing airports for the need of safe take-off and landing operations during wintry weather conditions. Additionally, there are various types of aircraft de-icing solutions such as electrical heating, weeping wing technology, alloys de-icing technology, ultrasound technology and others. Advancements as well as innovations in these technologies are anticipated to lead to further growth of the aircraft de-icing market in the upcoming years.

The global aircraft de-icing market is anticipated to record a significant CAGR throughout the forecast period, i.e., 2020-2028. The market is segmented by fluid into type I, type II, type III and type IV, out of which, type I segment is anticipated to hold the largest market share as type I fluids are highly used for removing the snow, ice or any frost layers from the critical surfaces of aircraft such as fuselage, engine inlets and others. This fluid is generally applied before type II, III and IV, whereas the latter three provide longer ice protection and more holdover time.

Growing need for advanced technology in order to meet the demands

In the present world scenario, it has become very important for the airports to be technologically advanced as well as equipped enough so as to serve the increasing air traffic without any cancellations or interruptions. This has led to several airports bringing in new technologies into airports which are ultimately estimated to lead to the growth of aircraft de-icing market in the upcoming years owing to the rising demand for advanced technology. CLICK TO DOWNLOAD SAMPLE REPORT

Increase in the number of crashes owing to snowy weather conditions

Aircraft de-icing has become an important procedure for the aircraft safety owing to the accumulation of ice which is predicted to possibly hamper the capability of a plane to fly efficiently as well as safely. Additionally, the increasing number of aircrafts is one of the principal motivator for the development of this market. As the number of uncertainties caused by weather conditions is growing rapidly, the market for aircraft de-icing is projected to grow in the upcoming years.

Airplane de-icing can leave residue in critical areas such as wings or stabilizers. During suitable weather conditions, the residue can expand or rehydrate and form into a gel-like substance that expands to many times the original size. The gel can freeze during flight and if located in the component of flight control, movements for control surface may be restricted which can lead to issues in controllability of airplanes. This factor is predicted to act as a restrain which can limit the growth of aircraft de-icing market in upcoming years.

Our in-depth analysis of the aircraft de-icing market includes the following segments:

On the basis of regional analysis, the global aircraft de-icing market is segmented into five major regions including North America, Europe, Asia Pacific, Latin America and Middle East & Africa region. The market in North America is anticipated to hold the largest market share on the back of the presence of nations such as United States and Canada where the duration of winter is more and temperatures are harsh and below the freezing point. Additionally, developed aviation infrastructure and rising number of commercial aircrafts are some of the factors that are anticipated to drive the growth of aircraft de-icing market in this region. The market in Europe is estimated to hold the second largest market share owing to rising air passenger traffic in the colder regions as well as increasing size of aircraft fleet. These factors are anticipated to grow the aircraft de-icing market in this region in the upcoming years. 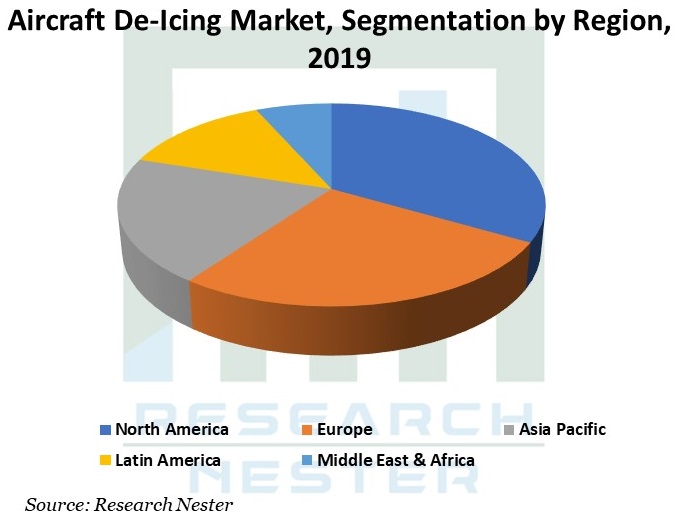 The aircraft de-icing market is further classified on the basis of region as follows: