Agrigenomics, also known as agricultural genomics, can be defined as the application of genomics in agriculture. Genomics is a field of biology which focuses on the transformation, structure, texture, function, measuring and rearrangement of genes. Agrigenomics is used for researching the impact of genes on livestock and crops and enhancing the productivity and viability of yield and livestock. The genetic markers which are linked to desirable traits, informing cultivation and breeding decisions are recognized through the advanced technology in agrigenomics by various agronomists, farmers, and agri-researchers. The applications of agricultural genomics consist of commercial agriculture, plant and animal agriculture, agricultural community, agriculture consortia and others.

On the basis of region, the agrigenomics market is segmented into North America, Europe, Asia Pacific, Latin America and Middle East & Africa. The market in North America is estimated to hold the leading share of around USD 9,000 million by 2027 and grow at the highest rate with a CAGR of 8% during the forecast period. This can be attributed to the presence of leading companies involved in research and development in the field of agrigenomics in North America. Further, the growing employment of agrigenomics in the United States is anticipated to expand the market size in the region. The market in Europe is anticipated to hold the second largest share over the coming years on the back of rising technological advancements in the region in this field. CLICK TO DOWNLOAD SAMPLE REPORT 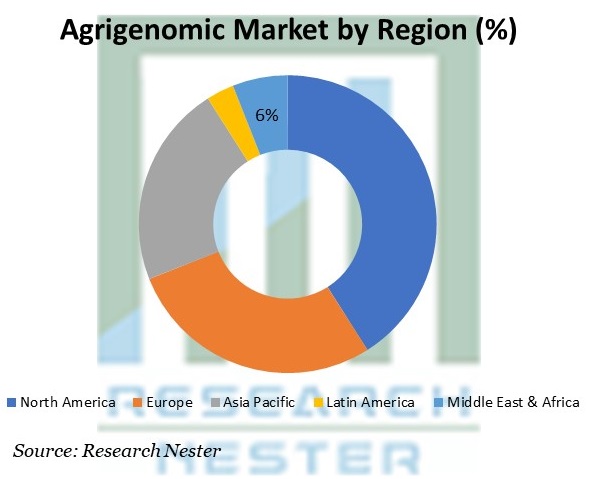 On the basis of application, the agrigenomics market is segmented into crops, animal science and marine biodiversity. The segment for animal science is again segmented into animal health & breeding and conservation. The crops segment is further subdivided into crop improvements and pest control & insect biology. This segment is anticipated to grow at the highest rate with a CAGR of around 9% over the forecast period. The United Nations released a report on the world population stating that in 2020, it is currently growing by approximately 81 million people each year; which is expected to reach 8.5 billion by the end of 2030. This results in enhancing food necessity across the world. On account of this, the segment is predicted to observe significant growth. Moreover, the crops segment holds the largest share in market as well and is projected to continue to do so by 2027. 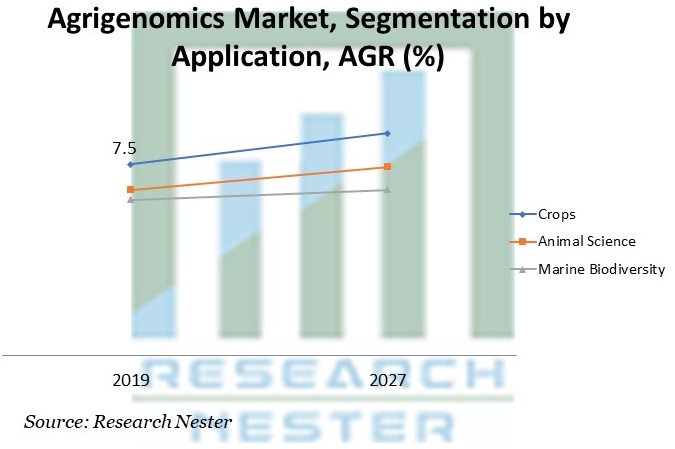 In April 2019, a study conducted by the Food and Agriculture Organization of the United States (FAO) stated that up to 40% of the total crop production is damaged by the pests. Further, the study revealed that on average, approximately USD 220 billion and USD 70 billion worth losses are faced by the industry as a result of plant diseases and invasive insects. This increases the demand for innovative disease resistance crops which are developed through agrigenomics.

The U.S. Department of Agriculture (USDA) National Institute of Food and Agriculture and Department of Energy’s (DOE) Office of Biological and Environmental Research collaborated in order to focus on improving feedstock with the help of protein characterization, molecular interactions and through genes.

Increasing adoption of advanced genomics technology such as next generation sequencing and automated systems is a major factor anticipated to result in the market growth in coming years. There is an increasing preference of upgraded technology by various researchers for the use of agrigenomics in research activities such as genetic disease elimination, targeted resequencing, and marker-assisted selection and breeding. In addition to this, the increasing government funding that is being provided to several research projects and studies that are related to agrigenomics is another important growth factor. Since these are expensive in nature, the funding results in continuation of these research activities globally.

Agrigenomics requires a high capital investment which is estimated to hamper the business growth in future. The complete process is costly as well as time consuming in nature. Moreover, the strict regulatory rules which are associated with the approval of final product created by agrigenomics is another growth restricting factor in the market. These regulatory bodies include International Organization for Standardization (ISO), the World Organization for Animal Health (OIE), and other regional bodies.

1) What are the major factors driving the growth of the Agrigenomics market?

Ans: Increasing adoption of advanced genomics technology and rising preference of upgraded technology by various researchers for the use of agrigenomics in research activities are major growth driving factors.

2) What would be the CAGR of Agrigenomics market over the forecast period?

4) Which region will provide more business opportunities for growth of Agrigenomics market in future?

Ans: North America will provide more business opportunities for market growth on the back of presence of leading companies involved in research and development in the field of agrigenomics in the region.

5) Who are the major players dominating the Agrigenomics market?