·   November, 2020: Vibalogics announced to establish its presence in the United States in a facility near Boston, Massachusetts. It is planning to invest USD 150 million into the establishment of its US production site.

The adenovirus based virotherapy market is estimated to garner a large revenue by growing at a robust CAGR over the forecast period, i.e., 2022 – 2030. The growth of the market can be attributed to factors such as growing number of cancer incidences around the world and increasing clinical trials to formulate effective oncolytic virotherapy in developing nations. According to the World Health Organization, cancer is the leading cause for deaths worldwide. The disease led to the demise of nearly 10 million people in the world. Along with these, escalating research & development concerned with adenovirus and surging demand for vector-based therapies are also projected to drive market growth in the coming years. Furthermore, rising government investments to spread awareness about early cancer detection is expected to provide ample growth opportunities to the market in the near future. 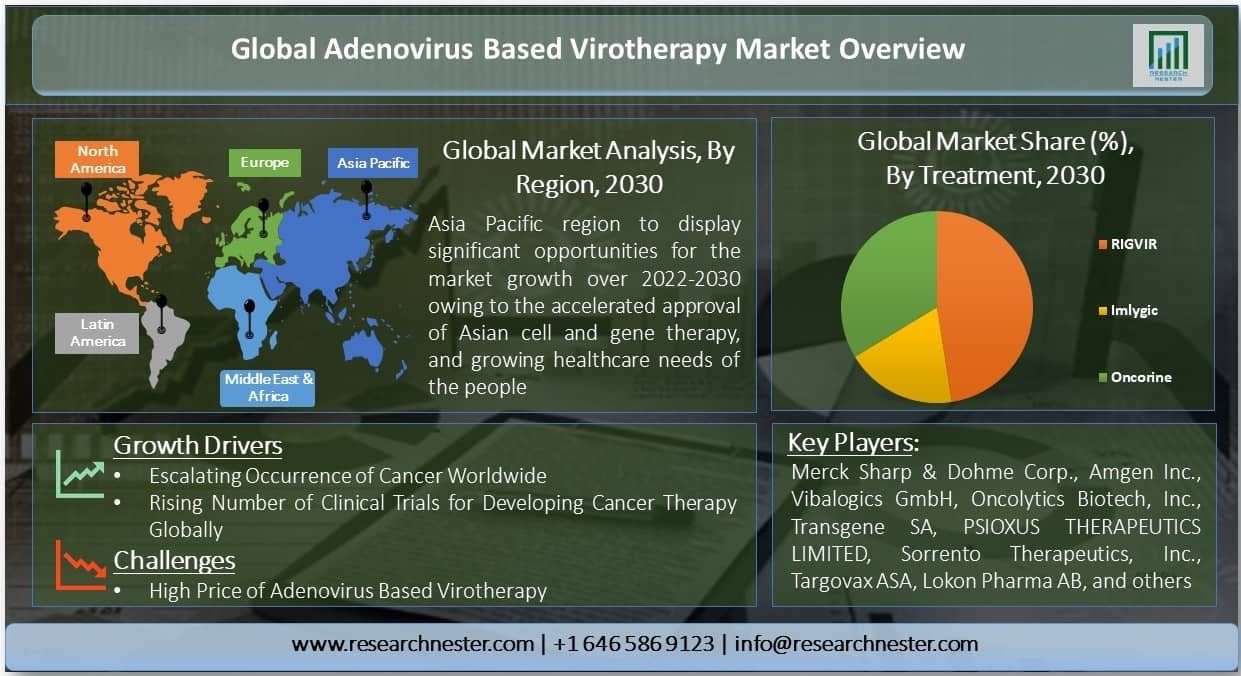 The market is segmented by application into solid tumors and hematological malignancies, out of which, the solid tumors segment is anticipated to hold the largest share in the adenovirus based virotherapy market on account of the commonness of cancers, namely breast, lung and prostate cancers, and rising R&D activities regarding cancer treatment across the world. According to the National Cancer Institute, the total number of cases of breast, lung and prostate cancer in the United States alone in the year 2021 are calculated to be 284,200, 235,760 and 248,530 respectively. In addition, the segment for imlygic is evaluated to observe highest growth during the forecast period owing to its efficacy in treating infected cancer cells by slowly hindering their growth and generating a systematic immune response. CLICK TO DOWNLOAD SAMPLE REPORT

On the basis of geographical analysis, the adenovirus based virotherapy market is segmented into five major regions including North America, Europe, Asia Pacific, Latin America and the Middle East & Africa. The market in North America is estimated to acquire the largest share over the forecast period on the back of availability of improved healthcare infrastructure, improvised reimbursement policies and high healthcare expenditure in the region. Additionally, presence of leading manufacturers is also expected to fuel the region’s market growth in the coming years. More than USD 510 billion were spent on medicines in the United States in 2019. Around 75% of drugs in the country are branded. Moreover, Asia Pacific is assessed to witness notable growth during the forecast period, which can be credited to the accelerated approvals of Asian cell and gene therapy, rising healthcare needs of the population, and increasing government and private investments to develop effective regenerative medication in the region. 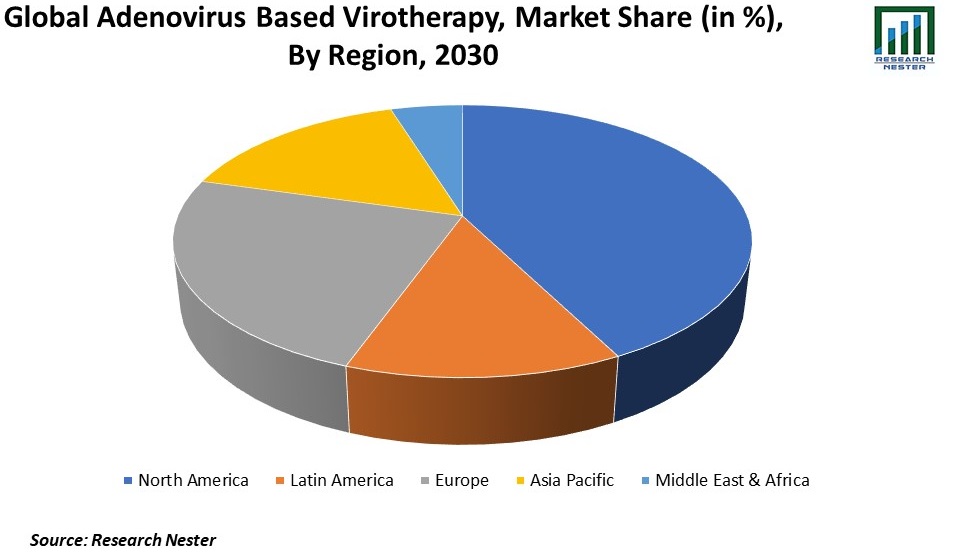 The adenovirus based virotherapy market is further classified on the basis of region as follows:

Our in-depth analysis of the adenovirus based virotherapy market includes the following segments:

1) What are the major factors driving the growth of the adenovirus based virotherapy market?

Ans: Rising prevalence of cancer around the world and increasing number of clinical trials in developed nations are the major growth drivers for market.

2) What would be the CAGR of adenovirus based virotherapy market over the forecast period?

3) What are the challenges affecting the adenovirus based virotherapy market growth?

Ans: High cost of adenovirus-based therapy is estimated to hamper the market growth.

4) Which region will provide more business opportunities for growth of adenovirus based virotherapy market in future?

Ans: Asia Pacific will provide more business opportunities for market growth owing to the accelerated approvals of Asian cell and gene therapy and rising healthcare needs of the population.

5) Who are the major players dominating the adenovirus based virotherapy market?

7) What are the segments in the adenovirus based virotherapy market?

Ans: The market is segmented by pipeline therapy, application, treatment, and by region.

8) Which segment captures the largest market size in the application segment in the adenovirus based virotherapy market?

Ans: The solid tumors segment is anticipated to hold largest market size in value and is estimated to grow at a notable CAGR over the forecast period and display significant growth opportunities.