Whey protein refers to a mixture of proteins that is isolated from whey, the liquid material that is left behind when milk is coagulated during the production of cheese as a by-product. This protein aids in the improvement of nutrient content in a diet. Being commonly marketed as a dietary supplement, there are various health attributes that are associated with it. Whey protein is widely used across several industries such as healthcare, nutritional, pharmaceutical etc.

The global whey protein market was valued at USD 9970.22 million in 2018 and is projected to garner USD 15,367.03 million by the end of 2024 by registering a CAGR of 7.59% during the forecast period i.e. 2020-2024. Few factors responsible for the rise in demand of whey protein globally can be attributed to the rising geriatric population, emergence of the millennial population and their consciousness towards a healthy living, and rising disposable income of individuals globally that has further encouraged the active presence and participation of multiple fitness and health oriented centres in the market. This has fostered an increase in the adoption of protein supplements in their regular diets. Apart from the above mentioned factors, whey protein is embraced for its ability to aid mass gain and fat loss, lowering blood pressure and incidences of cardiovascular diseases (CVDs), providing diet support and in some cases for fighting illnesses such as stress and cancer.

The global whey protein market is segmented by regions into North America, Europe, Asia-Pacific, Latin America and Middle East and Africa, out of which, North America is projected to account for leading share in terms of revenue by 2024 in the whey protein market. The rising health awareness is accelerating the growth of whey protein intake by fitness enthusiasts which has amplified the memberships at gyms and fitness centers in the U.S.A. Similarly, Canada has witnessed rising levels of disposable income and a steady growth in the number of health conscious individuals that has boosted the prospects of the market.

Europe holding the second largest market share is expected to grow at a CAGR of 8.34% over the forecast period. This can be attributed to the increase in geriatric population as they are prone to suffer increasingly on account of health complications. The market in China is anticipated to garner highest revenue in the Asia Pacific region, followed by Japan, India, South Korea and Australia. China is one of the country with largest population along with growing food industry which is escalating the demand for healthier food items including products made from whey protein. Moreover, higher western influence resulted in the trend of health and wellness driving the consumers towards functional food and beverages. 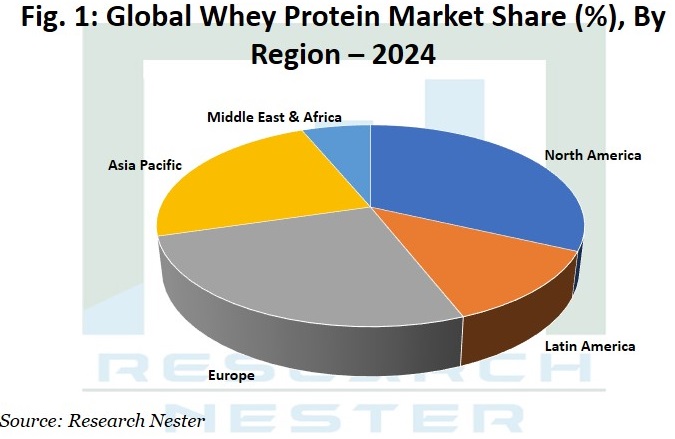 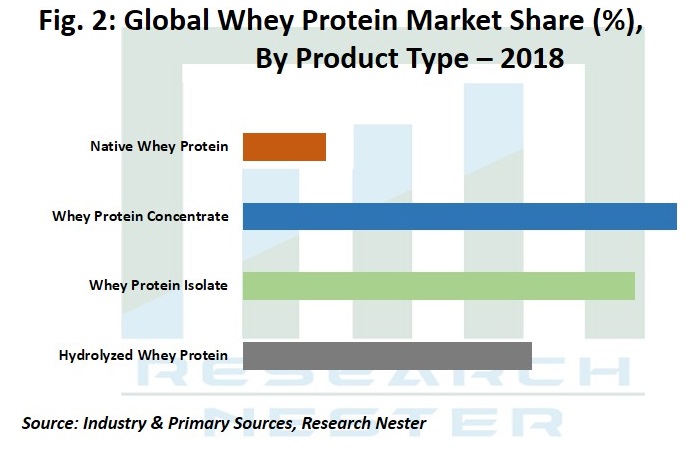 The global whey protein market has been segmented on the basis of distribution channel into online and offline stores. The online stores segment is expected to attain market share of 27.79% by the end of 2024. This can be attributed to growing internet penetration which in turn has accelerated the growth of e-commerce in developed and developing countries across the globe. 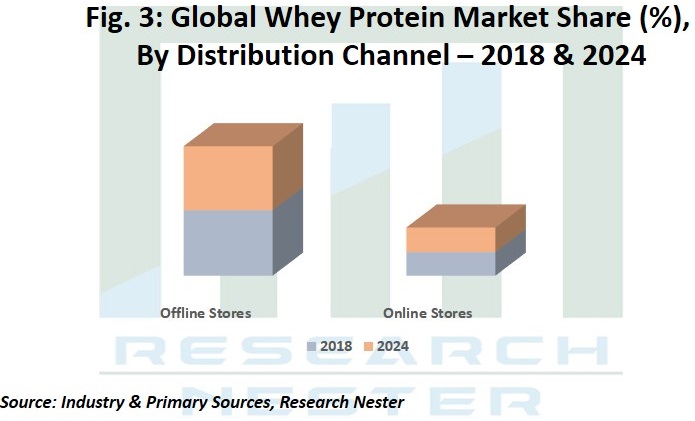 The global whey protein market has been segmented on the basis of price into premium, economy and low. Among the three, the premium segment is anticipated to be the most attractive in the overall whey protein market for all kinds of players in the market and is also expected to showcase highest CAGR growth during the forecast period. This segment is expected to remain the biggest market which would in turn open new avenues for the new and existing players.

The global whey protein market has been segmented on the basis of application into infant formula, dairy, sports and medical nutrition, confectionery & bakery, dietary supplements and others. Sports and medical nutrition segment is expected to grow by 5 BPS in value between 2012 -2024 and contribute a global market share of 17.34% in value by end of 2024 owing to increasing sports activities across the globe. On the other hand, dietary supplements segment is expected to contribute a market share of 27.67% by 2024.

The decline in infant mortality rate across the globe in the past decade is increasingly supporting the health awareness for infants. Moreover, with the continued rise in geriatric population across the globe, the requirement for whey protein is significant owing to deficiency in protein reported among them. Additionally, whey protein is available in various flavours and is accompanied by various nutritional benefits which are better for immune system and healthcare of the geriatric population.

The general awareness of health benefits and fitness among the consumers and a surge in the population along with increase in disposable income in the recent years has opened the doors for new opportunities in the fitness segment which can be witnessed through an increasing number of health clubs and fitness centres established to cater to individuals’ health requirements. The recommendations provided by these centres to members often include whey protein in their diet which in turn is fostering the growth of the whey protein market.

High manufacturing costs and the general lack of knowledge and inaccessibility in most of the rural areas associated with whey protein products are anticipated to dampen the growth of the market during the forecast period. Additionally, the low income levels of the people in developing economies is acting as another restraint to growth of the market, owing to their inability to afford the whey protein intake formulations into their daily diet.

Furthermore, the rise in the number of individuals across the globe opting for vegan food in the recent years and simultaneously shifting their diet towards plant based proteins such as soy-based, grass-based and many more is anticipated to negatively impact the growth of the market.