Wearable tailgating keg, also known as tailgating backpack dispenser, is a type of backpack that allows a person to haul two types of favorite beers, shots or any kind of mixed drinks to hand out at a party or directly dispense into mouth. This is made with lightweight nylon design and has fully padded shoulder straps for comfort and comes with a mesh bag which can be attached to the backpacks straps in order to haul around cups. This dispenser has two separate nozzles that allow an individual to pour two separate drinks at the same time using both hands.

The scope of wearable tailgating keg is vast in the regions where the alcohol consumption is more when compared to less alcohol consuming countries. With the help of this product, any drink can be served easily. Moreover, this is predicted to majorly benefit the market in the regions where serving alcohol in public places is legal as alcohol can be sold at public places and hence the demand for this product further increases.

The wearable tailgating keg market is anticipated to record a significant CAGR over the forecast period, i.e., 2020-2028.The market is segmented by storage segment into one tanker, two tanker and three tanker, out of which, the two tanker segment is anticipated to hold the largest market share owing to the comfortability as well as storage provided when compared with other tankers.CLICK TO DOWNLOAD SAMPLE REPORT

People today are shifting to the products that are easy to use and portable rather than the products that are difficult to carry and use. Wearable tailgating keg can be carried anywhere on account of its portability and contain a mesh bag in order to carry the cups. On the back of this, the market is predicted to grow over the forecast period.

Easy to advertise a drinking product

This product lets a person to carry any type of drink anywhere. Companies manufacturing drinks can advertise through this by sending their staff to different places so that people can get a taste of their product and several people can get to know about the product. As a result of this, the market for wearable tailgating keg is anticipated to grow in the upcoming years.

The lifestyles of the consumer are changing at a rapid rate. Presently, alcohol has become an important part of a number of parties held at clubs and other such events. With the help of this product, the person can earn money by charging a particular price per glass from the people in the parties. This is anticipated to significantly expand the global wearable tailgating keg market.

Wearable tailgating keg has a particular quantity set and cannot carry beyond that. Thus, if a company wishes to advertise through this medium, they cannot cover a large population due to its less storage capacity. Hence, this factor is estimated to act as a barrier to the growth of the market.

Can cause back related issues

This is a heavy product and has to be carried on the back, hence, this may cause back related issues to the person who is carrying it for a long period of time. This is estimated to hinder the growth of wearable tailgating keg market in the future.

Higher price with respect to the product

Wearable tailgating keg is sort of a storage device for drinks. It does not involve any kind of technical complexities and therefore the price of the item is high as compared to the product offered. This factor is predicted to limit the growth of wearable tailgating keg market in the upcoming years. 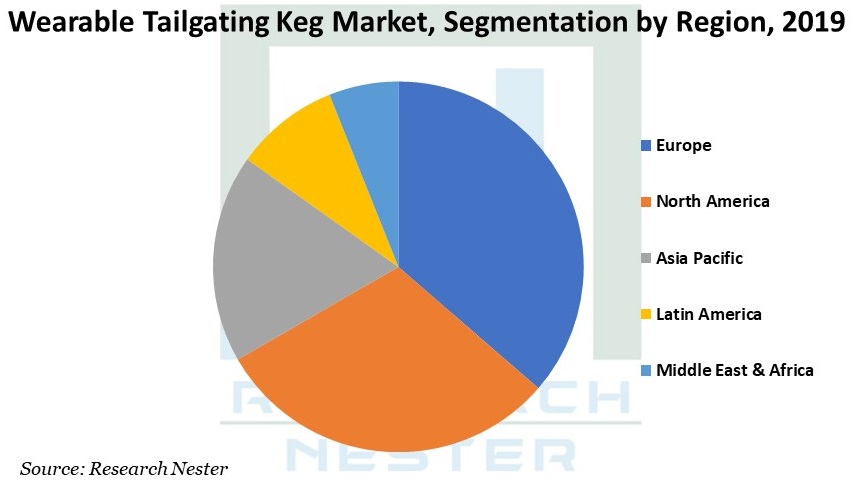 The global wearable tailgating keg market is further classified on the basis of regions as follows:

Currently, Thirstburst, RocketPacks and Rocketman, inc. are the key players that offer wearable tailgating keg. Additional market players are working towards innovations in bringing out varieties that would focus on offering comfortable and luxury driven experiences to their users.