The existing demand for vanadium is driven mainly by the consumption of steel which has applications in infrastructure, automobile and heavy machinery. The increased application of vanadium in energy storage aligned with support by various governments towards non-conventional sources and vanadium application in steel production is estimated to promote higher demand for vanadium compounds in forthcoming years. Further, increasing usage and wide scale applications of steel in automobile industry is believed to trigger the demand for Ferro and Nitro vanadium compounds in the global vanadium alloys market. Apart from this, countries such as China, Japan, Russia and U.S. are providing immense growth opportunities for the market of vanadium alloys to grow at a significant rate.

The global vanadium alloy market reached USD 3,768.1 Million in 2017 and is expected to reach USD 5,627.3 Million by the end of 2025, expanding at a CAGR of 5.2% over the forecast period i.e. 2018-2025.  Moreover, the growth of the vanadium alloy market is attributed to the increasing demand for steel in the infrastructural development, especially in developing countries. 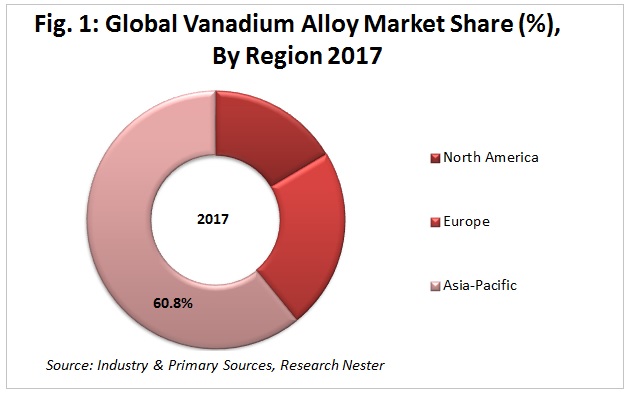 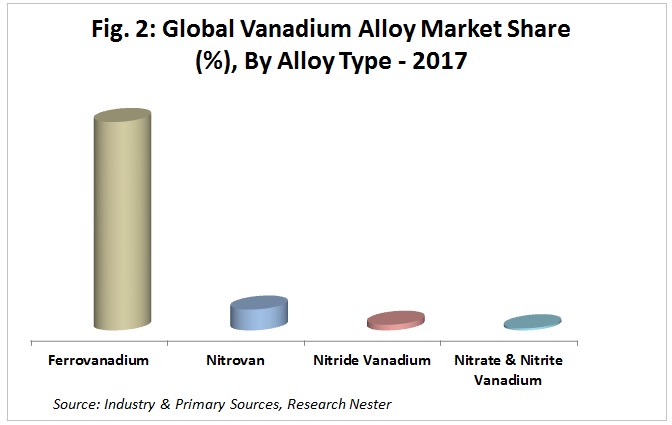 The global vanadium alloy market is thriving on the back of booming infrastructural development in developing economies around the world which has driven the Nitro-Vanadium industry to grow with significant pace. The boom in ferrovanadium and nitro vanadium industry is anticipated to exist for a significantly longer duration due to infrastructural growth in Middle East, Asian and other developing countries. The National Center for Biotechnology Information, USA, suggests a significant increase in usage of steel in building structures for various applications. Several governments of various countries had altered the policies and the regulations to promote non-conventional sources of energy. Since, the conventional sources require energy storage units; the application of vanadium redox flow battery in large scale energy storage units will boost the significant increase in demand for vanadium in forthcoming years.

Further, the wide scale application usage of steel in automobile industry and infrastructure development is believed to trigger the growth of the Ferro and Nitro vanadium compounds market.

The worldwide surge in the prices of vanadium due to sudden growth in demand and availability of alternatives have the potential to negatively impact the demand for vanadium alloy in upcoming years.

Few companies have been indulged in updating their portfolio to maximize the utilization of available resources and to stretch profitability. Since vanadium electrolytes are new and had been a promising evolution in energy storage industry, companies such as Bushveld Mineral Limited and Australian Vanadium Limited expanded their product portfolio to manufacturing and installation of Vanadium Redox Flow Battery.

Moreover, other key and niche players have been indulged in updating their portfolio to maximize the utilization of available resources and to stretch profitability in order to gain competitive edge in the global vanadium alloy market.