Underground coal gasification (UCG), is a clean, safe, and cheap technology suited to process deep, inaccessible coal to higher value syngas. It has the potential to increase global coal reserves used for power generation and gas-to-liquids processes. A combination of high oil prices, increasing global energy demand, and technological improvements, especially in directional drilling, has increased interest in the UCG industry and several countries are now witnessing increased investments in their UCG industries.

In countries with limited natural gas and oil reserves, but extensive coal reserves, UCG offers a cleaner and cheaper alternative energy source from coal. An additional benefit comes from UCG's compatibility with emerging technologies such as Carbon Capture and Storage (CCS), Enhanced Oil Recovery (EOR), Gas to Liquids (GTL). Furthermore, underground coal gasification also eliminates several activities associated with underground coal mining including coal washing, coal stockpiling, and waste disposal including ash handling and disposal. Thus, underground coal gasification is an effective and environment-friendly technique to lower the operating costs associated with the use of coal, this contributes to the growing popularity of coal gasification across both emerging and advanced economies.

There has been a continuous rise in the amount of CO2 emissions due to the growing economic activities. Coal-fired power plants accounted for the highest share in the global carbon emissions. This has led to several initiatives by the governments across the globe to promote the adoption of clean energy sources including coal gasification and other clean coal technologies.

The factors that drive the underground coal gasification market include feedstock flexibility for syngas production and the growing chemical industry. In addition, underground coal gasification can be used for converting coal into useful gases without mining. This has further resulted in organizations working towards the reduction of environmental pollution across the globe. One such resultant development has been the decarbonization of the transportation sector. Such initiatives will further propel the coal gasification market growth during the forecast period. 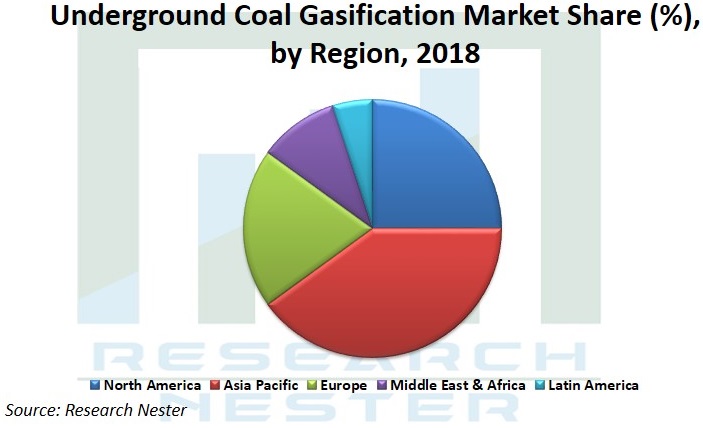 Asia-Pacific dominates the global market share, with rising demand from the chemical industry, primarily from refineries. The market growth in APAC can be attributed to several factors such as the rising demand for energy, the presence of significant coal reserves, and increasing demand for clean energy technologies. China is a hub for chemical processing, accounting for most chemicals produced, globally. China's refinery capacity constitutes 14.6% of the world's refining capacity. The Chinese oil and gas sector are dominated by four national and provincial oil companies, which include PetroChina, Sinopec, China National Offshore Oil Corporation (CNOOC), and Yanchang Petroleum.

Underground coal gasification market is further classified on the basis of region as follows:

A key factor driving the growth of the global coal gasification market is the economic benefit of coal gasification. Gasification harnesses the full energy potential of the feedstock while reducing the costs associated with disposal and environmental impact.

Lower capital requirement, reduced cost of plant installation, reduced need of rail and road infrastructure, environmental obligations, and usage of deep lying coal deposit by converting them into useful products are the factors to add to the growth of the underground coal gasification market.

The deceleration of UCG commercialization has been caused by recent decrease of world oil, gas and coal prices. Another substantial factor was lack of necessary regulations governing extraction and conversion of coal by UCG method in the jurisdictions where the UCG projects were proposed and developed. Apart from these objectives, there seem to have been more subjective and technical reasons for a slowdown or cancelation of several significant UCG projects, including low efficiency, poor environmental performance, and inability to demonstrate technology at a sufficient scale and/or at a competitive cost.