Thermal barrier coating (TBC) is a form of insulating and physical barrier, which restricts the contact of corrosive elements, such as electrolyte, with the substrate. These are advanced insulating paint and coating materials, usually of thickness of around 100µm to 2mm. They are applied to metallic surfaces, which allows higher operating temperatures and sustain prolonged heating conditions. They are manufactured using epoxy resins, polymers, aluminates and zirconia among others.

According to the International Organization of Motor Vehicle Manufacturers (OICA), world motor vehicle production grew from 56 Million in 1999 to 95 Million in 2018. 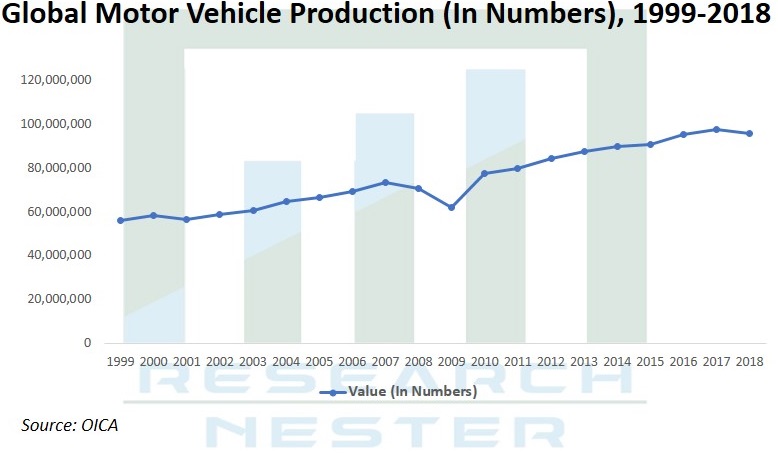 The thermal barrier coating market is observing vibrant growth on account of rising production of motor vehicles around the globe. Furthermore, coating applications in the aerospace, aviation and thermal power plant industry for implementations in gas turbines and highly efficient engines are expected to fuel the demand for the growth of the thermal barrier coating market.

The market is anticipated to record a CAGR of around 7.1% throughout the forecast period, i.e. 2019-2027. The thermal barrier coating market is segmented by application into industrial, automotive, aerospace and power plants, out of which, automotive sub-segment is anticipated to have largest market share on account of outstanding sales of motor vehicles. In another report stated by OICA, global motor vehicle sales grew from 65 Million in 2005 to 95 Million in 2018. 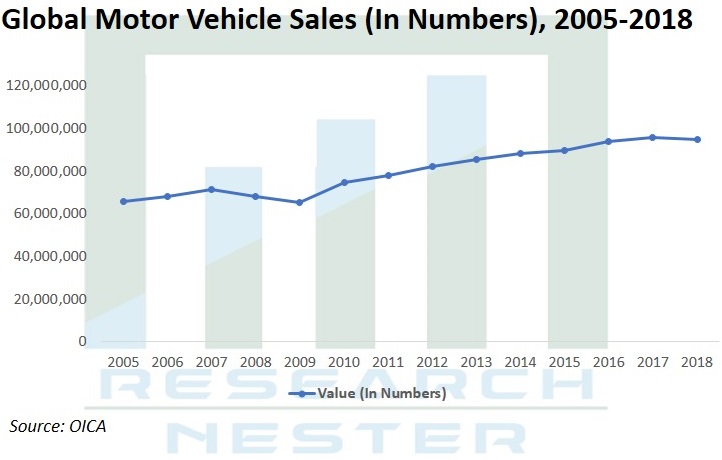 Furthermore, adoption of efficient heat management systems for the production of the engines is expected to add to the growth of the thermal barrier coating market. 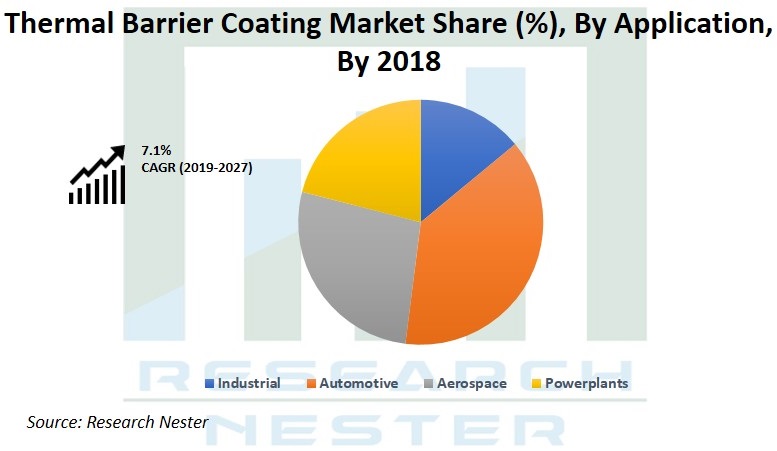 There is a rising demand amongst OEM and aftermarket manufacturers for constant development and production of rotating and moving components of engine parts, which have high thermal control properties and can sustain extreme temperatures inside the engine. This is primarily due to the concern of high wear and tear of these spare parts and their inefficiency to retain extreme temperatures. The thermal barrier coating insulation layer reduces deposition of parasitic mass in these components and increases the part durability by reducing oxidation and thermal fatigue.

According to the Aerospace Industries Association of Canada (AIAC), 62% of aerospace manufacturing exports in 2018 were supply chain related, of which aero engines has the share of 58%. 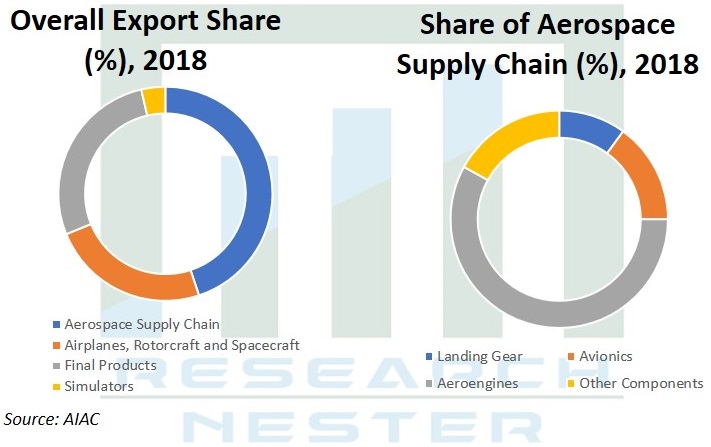 Furthermore, according to the trade map of International Trade Statistics (ITC), export of parts of turbojets or turbo propellers around the globe grew from 23,763,420 thousand USD in 2009 to 52,570,923 thousand USD in 2018. 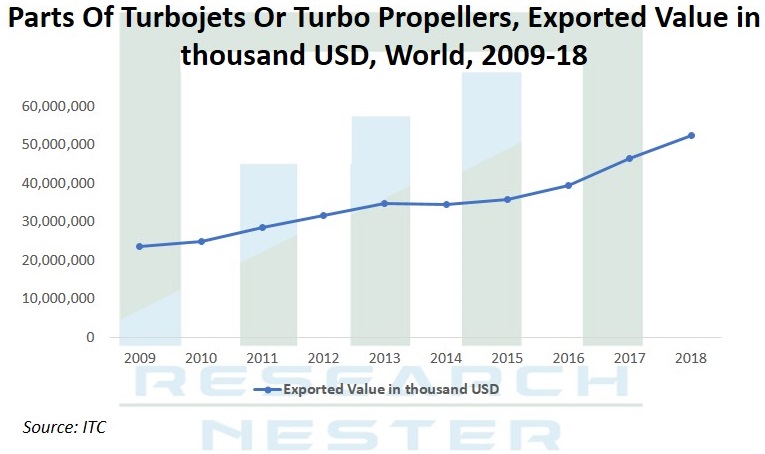 Growing Investments For Research And Development

The World Bank stated in one of their reports that expenditure for research and developments around the globe increased substantially from 1.97 (% of GDP) in 1996 to 2.23 (% of GDP) in 2016. 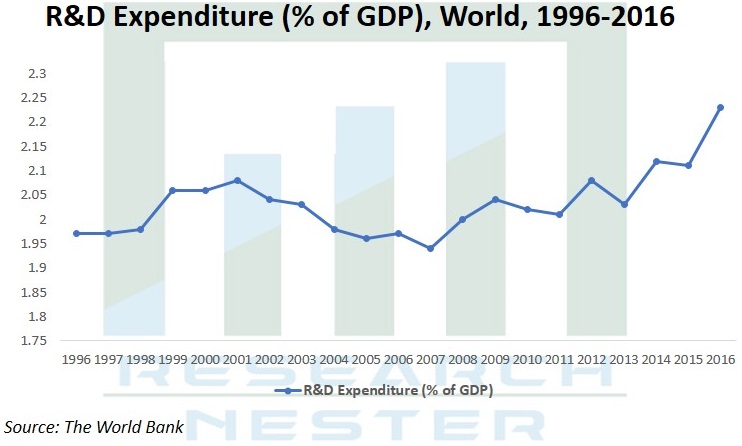 According to AIAC, the Canadian aerospace manufacturing industry invested 1.4 billion USD for research and development during the year 2018.

Rising investments in various industries, such as aerospace, automotive, defense, and others; all of these factors are anticipated to support the growth of the thermal barrier coating market throughout the forecast period.

Manufacturing of thermal barrier coatings includes rare earth metal oxides, such as zirconia, ceria, niobium oxide, etc. whose prices differ subject to their availability. The fluctuations in volatile raw material prices acts a barrier to the growth of the thermal barrier coating market during the forecast period.

Our in-depth analysis of the thermal barrier coating market includes the following segments:

Asia-Pacific is expected to have largest market share on the back of growing usage of thermal barrier coatings in manufacturing and other industries. Developing nations, such as China and India, are expected to contribute significantly to the growth of the thermal barrier coatings market, on the back of increasing number of power generation projects and demand for vapor deposition technology.

Further, North America is expected to gain significant market share owing to increasing demand for ceramic and epoxy coatings, utilized in civil constructions and buildings, as well as the automobile industry.

The thermal barrier coating market is further classified on the basis of region as follows: