A submarine launched missile (SLM) is a guided missile with the primary objective of delivery of nuclear warheads through a submarine. Most designs allow a single missile to target multiple targets simultaneously. Modern SLMs are closer to intercontinental ballistic missiles which have a range of over 5,500 kilometers. The first deign was developed by the Germans during the Second World War. However, the war came to an end before it could be tested. Since then, there have been tremendous improvements in the submarine launched missile technology which enables them to dodge reconnaissance satellites and launch nuclear warheads with virtual impunity.

Regional tensions in the Middle East, South Asia and other parts of the world have escalated in the recent times. Many countries are planning to revamp their security apparatus and invest in submarine launched missile technology to gain an upper hand over their neighbors and other hostile nations. Owing to these factors, the submarine launched missile market is expected to attain a significant CAGR during the forecast period 2020-2028. The market is segmented by application into research, national security and others. The national defense segment is anticipated to grow at the highest rate on the back of rising maritime border disputes and national security concerns across the world.CLICK TO DOWNLOAD SAMPLE REPORT 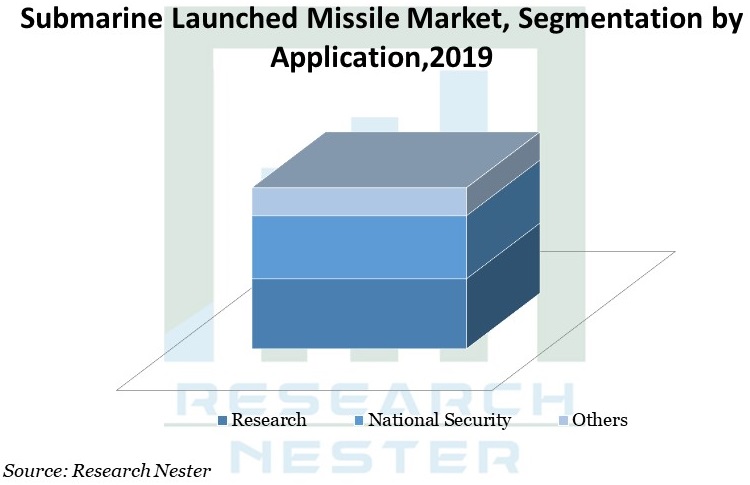 Increasing Defense Budgets of Countries across the World

As a result of increase in Gross Domestic Product (GDP) of countries, defense budget is increasing as well. Moreover, submarine launched missile technology has become increasingly reliable and efficient over the years upon usage of cutting edge technology. Increasing investment in submarine launched missile research and development to invent sophisticated technology that helps in efficient and accurate operation is anticipated to drive the market growth during the forecast period. Submarine launched missile market is bound to grow exponentially during the forecast period. Hence, use of sophisticated business intelligence technology, strategic management and machine learning would be prevalent. Important decisions such as pricing, marketing, finance and sales are predicted to be taken upon usage of analytical tools driven by data and less driven by instincts, resulting in further growth of the market in coming years.

Rising concerns for national security and frequent maritime border disputes have made governments across the world apprehensive. To mitigate these fears, they are heavily investing in the development of better and innovative submarine launched missile weaponry in order to defend them. This is anticipated to drive the market growth during the forecast period.

Nuclear submarine launched missile which is being developed by the military superpowers of the world is anticipated to drive the market growth during the forecast period. Moreover, countries around the world are investing heavily in Naval and Coast Guard forces to ward off security threats from the sea.

Intense Competition in the Market

Due to rise in the key players dominating the market, the intense competition is predicted to squeeze the profit margins forcing the mid-scale companies to adopt different strategies, thereby hindering the growth of this market over the next few years.

With a growing number of countries facing economic slowdown and recession, the share of defense in the budget may decrease. This is predicted to have a negative impact on the market growth during the forecast period.

Our in-depth analysis of the submarine launched missile market includes the following segments:

On the basis of regional analysis, the submarine launched missile market is segmented into five major regions including North America, Europe, Asia Pacific, Latin America and Middle East & Africa region out of which, the market in North America is anticipated to hold the largest market share on the back of high investments in the submarine launched missile technology and increased spending towards defense sector in the region. Moreover, the market in Asia Pacific is anticipated to record the highest CAGR over the forecast period on the back of rapidly growing investments in the defense sector and maritime border disputes in the region.

The global submarine launched missile market is further classified on the basis of regions as follows: