· On April 23, 2o19, Boston Scientific Corporation announced that it received the FDA approval for its LOTUS Edge™ Aortic Valve System. It is a form of trans-catheter aortic valve replacement (TAVR) technology that is delivered through a minimally invasive technique.

· On September 27, 2019, Abbott announced the approval of its two pediatric devices for congenital heart defects in Europe. The devices named Masters HP™ 15mm rotatable mechanical heart valve and Amplatzer Piccolo™ Occluder have received the CE Mark and are available in the regions recognizing this mark. The Masters valve is the world’s smallest mechanical heart valve which allows the replacement of mitral or aortic valve in infants. On the other hand, the Amplatzer Piccolo is used to treat patent ductus arteriosus (PDA) and can be used for babies weighing under one kilogram.

The Centers for Disease Control and Prevention estimated through a study in Atlanta that around one in every 770 babies born in the Unites States every year were born with an atrial septal defect.

The structural heart devices market is anticipated to record a CAGR of around 9.5% over the forecast period, i.e., 2019-2027. The market is segmented by product, by procedure, by indication and by region. The product segment is further divided into heart valves, occluders, annuloplasty rings, accessories and others, out of which, the heart valves segment is anticipated to hold the largest share in the structural heart devices market on account of rising number of procedures for trans-catheter aortic valve replacement. The heart valves consist of two types of valves, mainly surgical heart valves and trans-catheter heart valves. Along with the flourishing demand for heart valve devices, the growing approvals of these devices by the regulatory authorities is another factor estimated to result in the growth of this segment during this period. CLICK TO DOWNLOAD SAMPLE REPORT 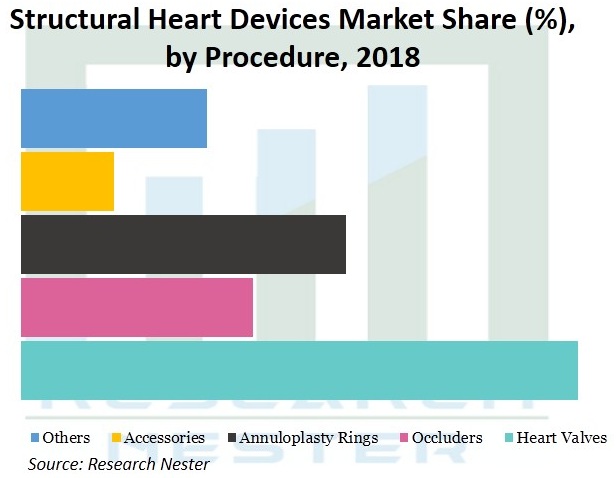 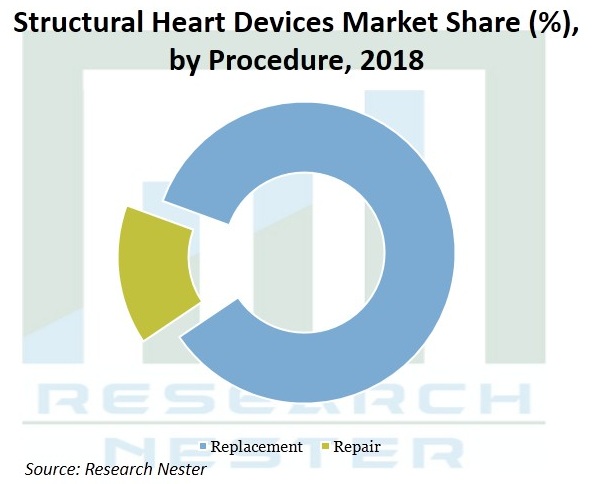 Rising Structural Heart Diseases to Raise the Demand for These Devices

According to the CDC, congenital heart diseases affect around 1% births per year in the United States, which is approximately 40,000 births. The growing incidences of structural heart diseases among people, including congenital heart defects, are estimated to increase the demand for advanced treatment methods. This is anticipated to drive the market growth over the forecast period.

The development of new and innovative devices for the treatment of structural heart diseases such as annuloplasty rings and occluders is another factor anticipated to contribute towards the market growth. Rising healthcare expenditure in various countries across the world leads to a higher demand for improved products which are highly effective and last a longer time.

High Cost of Treatment to Hamper the Market Growth

The treatment for structural heart diseases requires surgery which can be a highly costly procedure. Moreover, the devices with new and improved technology are expensive as well. This is predicted to lead to lower adoption of such devices in future. The rising cost of medical devices plays a major role in restricting the growth of the structural heart devices market. Furthermore, the strict government policies regarding the safety and approval of these devices is estimated to limit the growth of structural heart devices market over the forecast period.

Our in-depth analysis of the structural heart devices market includes the following segments:

The largest share in structural heart devices market is anticipated to be held by the market in North America. The growing number of surgical procedures involving the heart along with rising advancements in medical technology and increasing healthcare expenditure are some factors estimated to be responsible for the market growth in this region. Moreover, the market in Europe is predicted to hold the second largest share on account of increasing elderly population as well as heart related disorders which results in a high demand for structural heart devices in the region, mainly in countries such as Germany. The fastest growing market is anticipated to be the market in Asia Pacific region on account of the large population and unhealthy lifestyle in Asian countries including China and India.

The structural heart devices market is further classified on the basis of region as follows: