Agricultural market progressions globally have made farmers and the governments recognize the significance of irrigation in increasing agricultural production and harvests. Sprinkler irrigation is a technique of spraying irrigation water which is similar to natural rainfall. It is a crop irrigation system, also known as mechanized irrigation that uses machinery. It is engineered to push a precise amount of water and can control and monitor the water resource, resulting in water and energy savings. The water can be sprayed either over or below the canopy of the crop.

The sprinkler irrigation systems market is expected to observe an attainable high CAGR during the forecast period, i.e., 2020-2028. The market is segmented by type, product, crop type, field size, mobility, application and region. Among product types, the center pivot sprinkler type segment is expected to hold the largest market share during the forecast period. The segment growth is predominantly attributed towards the higher demand for center pivot sprinklers for irrigation of most field crops, cereals, legumes, forage, and vegetables. It is also used as a supplementary irrigation for rain-fed grain. However, the price for each system unit is relatively high and is therefore reasonable for large irrigated farms.

Amongst product types, the lateral move sprinkler segment is anticipated to grow at the highest rate during the forecast period owing to the lower capital costs for lateral move systems than that of center pivots as these are desirable for large areas. Also, unlike center pivots, these systems have a constant pressure along the length and are also more labor-intensive. One of the key disadvantages of lateral move sprinkler systems is that it waters over recently irrigated land when changing direction, which leads to operational problems such as non-uniform irrigation. 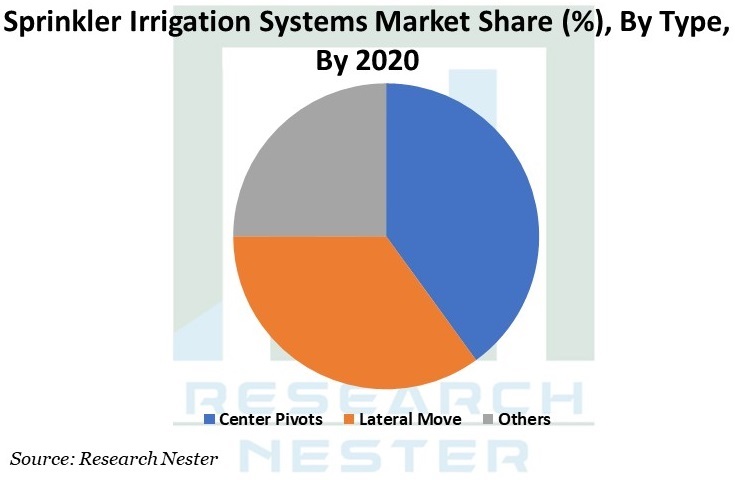 The budding awareness related to the benefits of sprinkler irrigation among farmers is triggering a rapid shift from flood irrigation towards sprinkler systems, globally. The key factor boosting this trend includes the distress concerning the disadvantages of flood irrigation such as poor water-use efficiency, incompetency to irrigate uneven terrains, and uneven water distribution. The return on investment accompanying the cost after 2-3 years, along with the accessibility to a wide range of sprinkler system machinery, encourage producers to implement sprinkler irrigation systems. CLICK TO DOWNLOAD SAMPLE REPORT

The agricultural industry is adversely affected by the current outbreak of COVID19 that has impelled all businesses to come at a halt. Nevertheless, crop cultivation and irrigation have coped up to survive in developing countries such as Pakistan, India, South Africa, China, and others. The worth of sprinkler systems has witnessed widespread rise due to its low labor association and cumulative need for crop irrigation to feed the population even during the coronavirus occurrence and global declaration of lockdown. However, in the developed nation-states of Europe and North America, the market is stable on account of the availability of automated sprinkler systems.

Additionally, increased government subsidy on the usage of sprinkler irrigation systems especially in agriculture-dominant countries such as India and China, and the launch of several favorable programs by government and non-government organizations to help farmers are also contributing significantly towards the market growth.

Furthermore, the technological advancements in the existing irrigation systems for better monitoring and control of water resources and higher efficiency, growing demand for better yield and quality of crops, decrease in labor costs, and ease of operations is anticipated to supplement the overall market growth during the forecast period.

The type of technology impacts the selection of irrigation methods to a greater extent. The high installation expenses involved in the set-up of  irrigation system in the field has been expected to be a restraining factor towards the market’s growth. This factor is especially limiting the market growth in the price-sensitive developing nations of South America and Asia-Pacific and the poor, underdeveloped countries of Africa. The buying of equipment needs high capital investment per hectare, along with this, a steady supply of fuel and spare parts must be upheld which together might put a huge burden on the farmers and farming community.

Our in-depth analysis of the sprinkler irrigation systems market includes the following segments:

In European regions, increasing awareness for modern irrigation systems, their widespread utilization, and allotment of huge land areas under sprinkler irrigation system is expected to boost the market growth.

Flexible and Precise Irrigation Platform to Improve Farm Scale Water Productivity (FIGARO) was a European research project co-funded by the European Commission under the 7th Framework Programme (FP7) for significant reduction in the use of freshwater on farm level through evolving a cost-effective, precision irrigation management platform.

The Asia Pacific market is anticipated to register substantial growth in the global market in terms of revenue over the forecast period. Factors, such as government initiatives and investments for technologically advanced farm equipment and treatment ways, the necessity of high-quality agricultural yield, rising import & export situation, along with increasing water stress in the region, are the key contributors of growth in this region. Additionally, agro-climatic conditions and a high proportion of available agricultural land in countries such as China, Japan, and India are anticipated to drive the growth of the market in the region.

The Government of India in its scheme Pradhan Mantri Krishi Sinchayee Yojana encourages the usage of sprinkler irrigation to save water.

The market in the Middle East and African regions are also expected to witness significant growth opportunities majorly due to strong government support policies. A series of resourceful irrigation systems in Mozambique, Tanzania, and Zimbabwe have revealed multiple impacts including lesser water usage, reduced conflict, higher crop yields, and better on and off-farm household incomes.

The bilateral relations between India and Israel resulted in the Indo-Israeli Agricultural Cooperation Project started in 2008 and leading to the signing of a three-year Action Plan built on a government to government agreement.

However, in developing countries such as India, China, South Africa, Pakistan, and others, the economic slowdown caused due to the COVID 19 pandemic can affect the annual installations of high priced sprinkler irrigation systems.

The sprinkler irrigation systems market is further classified based on region as follows: