Spray foam manufactured from isocyanate and polyol resin is a chemical product that expands up to 30-60 times after it is sprayed on a surface in its liquid form. Spray foams make an excellent insulator on account of its virtually no air infiltration property with its application in packaging material which forms to the shape of the product being packed. They have various properties such as thermal resistance with higher R-value of an insulation product and can be used in the form of medium-density closed-cell spray foam (ccSPF) and light-density open-cell spray foam (ocSPF). They are also used for insulation of packaged products as well as in building applications. The applications of spray foam insulation in lowering utility bills by saving energy costs are expected to propel the growth of the spray foam insulation market during the forecast period i.e. 2018-2027.

Currently, the market is observing vibrant growth on the back of increasing demand for thermal insulation in the market. Advancements in different end-user industries in the past few years and growing technological explorations are projected to drive the market during the forecast period. Besides, capability of spray foam insulation to block conductive, radiant as well as convective heat transfer is predicted to aid the market growth strongly across the globe.

With a rapidly growing building and construction industry across the North America region, the market is panned to observe significant growth on the back of adoption of spray foam insulation in the United States along with a new technology called Wall Injection to retrofit existing wall construction. North America is expected to be followed by Asia Pacific in terms of consumption due to expanding requirements for heat insulation of roofs across the region as well as for increasing insulation at ceiling level. Europe is expected to drive the demand and positively impact the market growth over the forecast period owing to the increasing use of spray foam insulation in existing and new building applications in compliance with new building regulations in U.K. 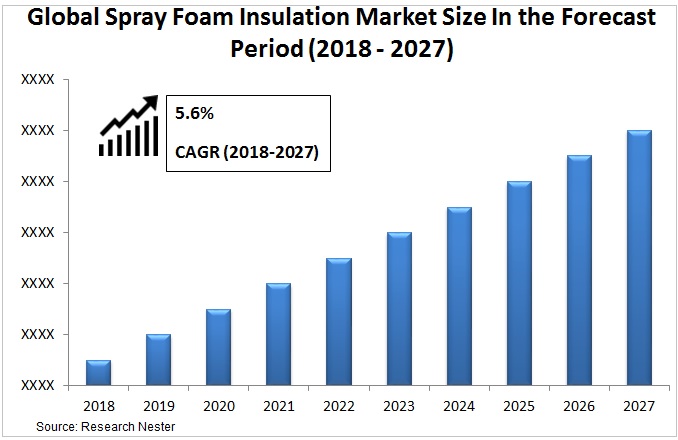 Rapid economic development with thriving manufacturing sector and increasing industrialization is expected to boost the market growth in the developing regions around the world. Rising building and construction industry on the back of growing urbanization is also predicted to propel the market shares over the forecast period. The World Health Organization gave an estimated growth of 1.84% of urban population per year between the period of 2015 and 2020. The rise in number of commercial complexes across the developing economies is additionally estimated to aid the market growth during the forecast period across the globe.

The increasing number of government regulatory bodies in different countries opting the use of spray foam insulation in buildings in order to support energy efficiency as well as the trend towards going green is estimated to positively impact the market around the globe. The growing number of middle income population looking for reduced long-term energy consumption across the temperate regions of the world is anticipated to contribute optimistically to the growth of the market over the forecast period. The applications of spray foam for engineered packaging of various objects such as sculptures, large fossils, computers and others that require efficient damage protection from temperatures as well as mechanical strain are subsequently expected to push the market strongly.

Moreover, increasing modifications in building codes amendments around the developing as well as the developed regions of the world are expected to propel the market of spray foam insulation over the forecast period.

Conversely, curing of spray foam insulation is required before their use and that process emits a gas that causes blurred vision and troubled breathing which is predicted to limit the growth of the market. Additionally, sporadic cases of hypersensitivity pneumonitis reported in handling workers is further expected to restrain the market’s growth over the forecast period.

The global spray foam insulation market is further classified on the basis of region as follows: 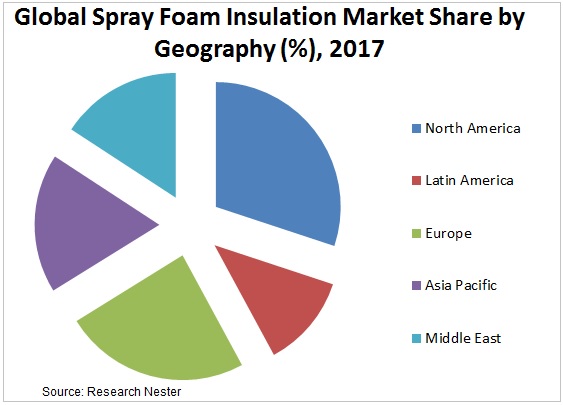