Non-verbal ability in association with autism spectrum disorder (ASD) disables the patients expressing basic wants and needs, making communication very difficult. Ganz et al. (2013) reported that approximately 20–30 % of those with ASD lack functional communication. About one third to one half of autistic adults and children are non-verbal, and have difficulty in language use, comprehension, and listening (Beukelman and Mirenda 2013; Cafiero and Meyer 2008; Carr and Felce 2007; Mirenda 2003). To overcome the communication barriers and improve the communication skills of children and adolescents with ASD, the augmentative and alternative communication (AAC) systems has been adopted in the special education programs, especially for those with severe communication disorders, allowing them to express themselves within minimal learning span. Among the AAC systems, speech-generating devices (SGDs) [also known as voice output communication aids (VOCAs)] are a type of electronic aids that can support by indicating images or sounds. The users can press the buttons on the SGD interfaces to facilitate communication with others (Beukelman and Mirenda 2013; Schlosser et al. 2009). Numerous studies have explored the effect of AAC systems on social interaction, cognition, and assessment. Flores et al. (2012) reported that SGD and iPad interactive game could enhance social interaction and promote cognitive development and communication behavior among peers.

Global Speech Generating Devices Market is further classified on the basis of region as follows: 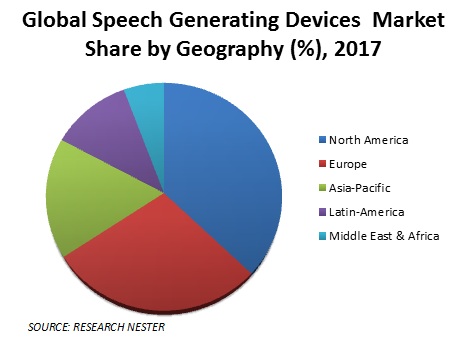 A number of developments in the electronic technology over the past decade have enabled the speech generating devices to be portable and comparatively more user interactive. The global speech generating devices market is witnessing a key trend of superior automation and introduction of AAC apps on mobile devices for supporting people with sophisticated communication requirements as well as for their caregivers. This is deemed to be one of the highly innovative changes occurring worldwide in the speech generating market which will expand the market strongly during the forecast period. Companies are focusing on the touch screen devices to navigate them easily. In addition to that, they can be connected to various versions of smart phone as of Android and iPhone. Thus, due to the portable nature of these devices, it is gaining purchase from various speech related disorder patients building noteworthy opportunities to the speech generating device manufacturers.

The Global Speech Generating Devices Market is segmented as follows: