Solid state battery is a type of battery technology that uses electrodes and electrolyte which are solid in nature. It prevents the utilization of liquid or polymer gel electrolytes found in lithium-ion or lithium polymer batteries. Advanced ceramics, for instance oxides, sulfides and phosphates among others, coupled with solid polymers are proposed for utilization as solid electrolytes in the solid state batteries.

Solid state batteries have found massive usage in pacemakers, RFID and wearable devices primarily owing to their potentiality, safety for use and higher energy densities. Solid state batteries are usually nonflammable and is believed to allow faster recharge technologies.

The market of solid state batteries is observing vibrant growth on account of increasing application in healthcare, wearable devices and drones. Furthermore, technological advances in electric and hybrid vehicles and the demand for longer durability of batteries in the vehicles are some of the notable factors that are expected to boost the growth of the solid state batteries market.

The market is anticipated to record a CAGR of 45.0% throughout the forecast period, i.e. 2019-2027. The solid state batteries market is segmented by application into consumer and portable electronics, vehicles, energy harvesting, wearable devices, medical devices and others, out of which, the vehicles segment is anticipated to hold largest market share on account of growing demand for electric vehicles and hybrid vehicles. According to the European Commission, 262 million cars were registered in the European Union (EU) Member States during the year 2017, of which 2 million cars were classified as either electric cars or hybrid cars. 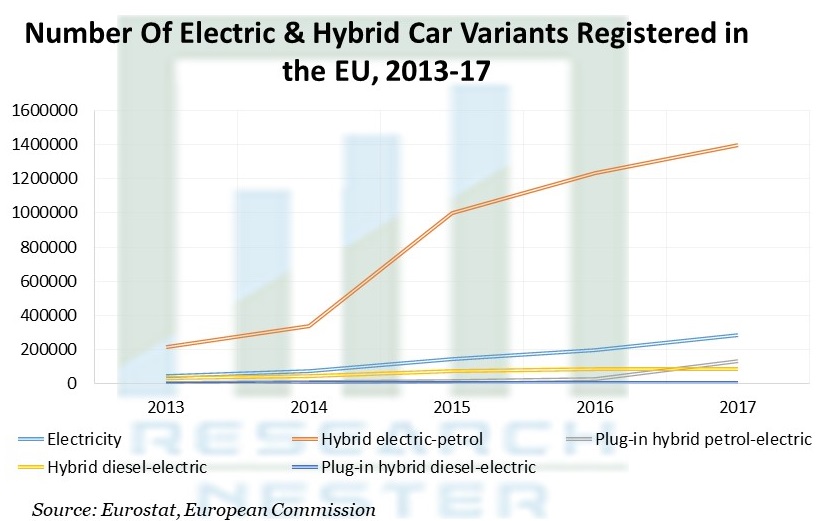 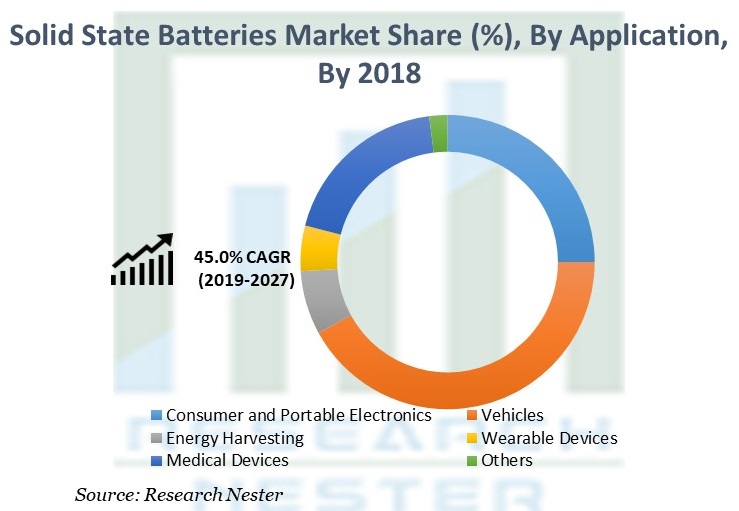 Growing concerns for environmental spillage from waste batteries along with safety concerns of these traditional batteries are raising the demand for efficient batteries amongst enterprises. Furthermore, stringent norms by the government for reducing key waste streams, such as the Batteries Directive 2006/66/EC by the European Union legislation and the targets for collection and recycling of the batteries is estimated to drive the demand for solid state batteries.

The advantage of utilizing solid state batteries include the absence of electrolyte leakage or vaporization owing to the solid state form of battery. Moreover, these batteries have long life cycle, utilize electrode materials with higher energy densities and fewer safety issues owing to the elimination of flammable organic solvents.

Growing concerns for global greenhouse gases (GHG) emissions and stringent norms by the governments of various economies for vehicle pollution are raising the demand amongst OEMs to opt for alternative energy vehicles, such as electric vehicles or hybrid vehicles. Electric vehicles are powered by electric vehicle battery, whereas hybrid vehicles utilize a combination of traditional fuel and electric batteries to run the vehicle. These vehicles powered by alternative sources of energy are promoting the demand for solid state batteries and also decrease in environmental pollution.

Additionally, governments of various economies are also promoting the deployment of electric commercial vehicles for greater utilization of public transport services, as well as to reduce environmental pollution generated by traditional commercial vehicles.

Our in-depth analysis of the solid state batteries market includes the following segments:

North America is expected to have largest market share on the back of increasing demand of batteries for packaging, smart cards and in the use of vehicles powered by electric or hybrid technologies. Furthermore, paradigm shift towards deployment of sustainable energy technologies is anticipated to fuel the growth of the market in the region.

Additionally, Europe is expected to gain significant market share on the back of growing research and developments for technical advancements in battery technology and development of renewable energy sources. The region is also favored by regulatory policies pertaining to the development of industrial sector, coupled with ongoing adoption of electric vehicles across the nations, all of these factors are anticipated to fuel the growth of the market in the region.

The solid state battery market is further classified on the basis of region as follows: