·    March 2021: Scientists from the Polytechnic Institute of the Far Eastern Federal University (FEFU) in Vladivostok, Russia, collaborated with other colleagues from Russia, Saudi Arabia and India to develop a self-healing concrete material by using bacteria Bacillus cohnii, that provides extended structure stability.

The global self-healing concrete market is estimated to garner a large revenue and grow at a CAGR of ~31% over the forecast period, i.e., 2022 – 2030. The growth of the market can be attributed to the increasing construction activities around the world, growing need to reduce the structural maintenance of buildings and rising demand for durable constructions. It was calculated that in 2021, the total number of construction projects in the world will increase by almost 6 percent from the previous year. In the United States alone, the total construction spending is evaluated to increase by more than 8% this year. In addition, high return on investment offered by the use of self-healing concrete is another factor expected to drive market growth in the upcoming years. Furthermore, there is a surge in demand for sustainable infrastructural activities which are not only environment-friendly but also highly cost-effective in the long run. This in turn is projected to provide abundant growth opportunities to the market in the near future. 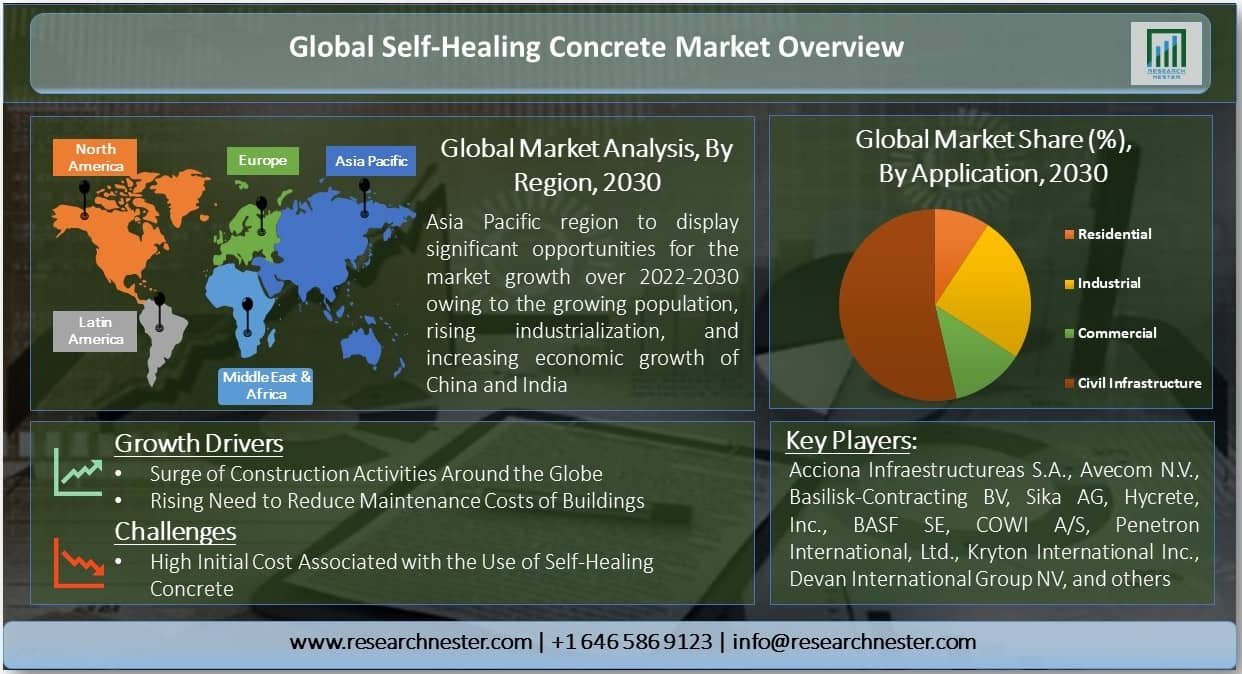 The market is segmented by type into intrinsic, vascular and capsule-based, out of which, the vascular segment is anticipated to hold the largest share in the global self-healing concrete market on account of the high usage of this type of self-healing concrete at locations where a crack is likely to occur. Along with this, the capsule-based segment is evaluated to witness the highest growth during the forecast period owing to the benefits of this type of concrete such as high strength, ease of convenience to use at a large scale and ability to create concrete matrix. Additionally, on the basis of application, the civil infrastructure segment is assessed to grab the largest share over the forecast period, which can be credited to the increasing number of initiatives by companies to commercialize the development of the product, and strong resistance of this concrete to several chemical and physical factors.

On the basis of geographical analysis, the global self-healing concrete market is segmented into five major regions including North America, Europe, Asia Pacific, Latin America and Middle East & Africa region. The market in the Asia Pacific region is estimated to witness noteworthy growth over the forecast period on the back of rapidly increasing population, rapid rate of industrialization, and growing economies of countries such as China and India. Apart from these, rising per capita income of emerging economies in the region, low labor cost and high abundance of resources are also projected to drive market growth in the coming years. According to the World Bank, the per capita income of China in 2020 increased up to USD 10,500.4, and the same quantity in India grew up to USD 1,900.7 that year. Moreover, the market in Europe is expected to gather the largest share during the forecast period ascribing to the escalating number of government initiatives supporting the use of self-healing concrete and increasing number of construction-based activities in Germany, France and the United Kingdom.

The global self-healing concrete market is further classified on the basis of region as follows:

Our in-depth analysis of the global self-healing concrete market includes the following segments:

What are the major factors driving the growth of the self-healing concrete market?

The major growth drivers for the market are growing construction activities in the world and need to reduce the maintenance cost of buildings.

What would be the CAGR of self-healing concrete market over the forecast period?

What are the challenges affecting the self-healing concrete market growth?

High initial cost of self-healing concrete is estimated to hamper the market growth.

Which region will provide more business opportunities for growth of self-healing concrete market in future?

Asia Pacific will provide more business opportunities to the market owing to the increasing population and rapid rate of industrialization in the region.

Who are the major players dominating the self-healing concrete market?

The major players in the market are Acciona Infraestructureas S.A., Avecom N.V., Basilisk-Contracting BV, Sika AG, Hycrete, Inc., and others.

What are the segments in the self-healing concrete market?

Which segment captures the largest market size in the type segment in the self-healing concrete market?

The vascular segment is anticipated to hold largest market size and is estimated to grow at a notable CAGR over the forecast period and display significant growth opportunities.