Proton therapy is a kind of treatment which uses beams containing high energy for the treatment of tumors. It is a type of radio therapy that uses positively charged particles, technically known as protons to treat benign tumors (non-cancerous tumors). It has a potential to treat several types of cancers. As compared to radio therapy, the proton therapy shows little side effects and is used in combination with other cancer treatments and therapies. Common side effects of proton therapy include redness around the part of the skin where it has been treated, headache, hair loss, several types of digestion problems, fatigue and soreness around the skin.

Proton therapy is also known as proton beam therapy. Cyclotron or synchrotron is a machine which increases the velocity of protons. This high speed of energy helps in eradicating harmful cancerous cells. The proton therapy provides targeted therapy of cancer with relatively less side effects. The prime advantage of proton therapy or proton beam therapy is that it gives doctors a privilege to aim the beam in the location which has to be targeted. The point of contact of the highest energy beam is technically referred to as Bragg peak. The depth and the shape of the tumor are confirmed by a proton beam.

The market is observing vibrant growth on account of increasing number of cancer patients coupled with the increase in tobacco consumption around the globe. Further, the rise in the expenditure of healthcare sector and various technological advancements along with numerous ongoing improvements in medical insurance and growing awareness among people are some of the factors which are helping the market to grow. Proton therapy is becoming a mainstream method to effectively treat various types of cancer. Minimally invasive property of proton therapy and the enhancement in the geriatric population are also anticipated to augment the growth of the market in upcoming years.The proton therapy market is anticipated to record a CAGR of around 15.4% over the forecast period i.e. 2019-2027. The market is expected to showcase a vibrant growth on the back of significant properties of proton therapy as compared to radiation therapy. CLICK TO DOWNLOAD SAMPLE REPORT 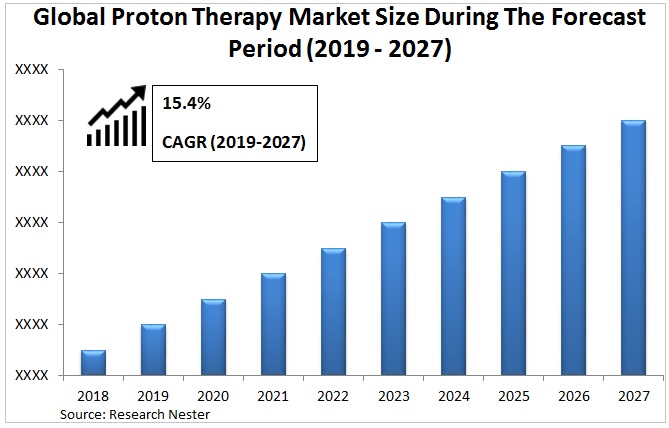 Cancer is treated by different types of therapies which uses strong chemicals (chemotherapy) and powerful radiations (radio therapy and proton therapy) to destroy cancerous cells in the body. Cancer patients often undergo therapeutic treatments. The rise in the population of cancer patients is directly related to the use of therapies to treat cancer. According to the International Agency for Research on Cancer (IARC), in the year 2018, there were 17 million new cases of cancer along with 9.5 million cancer deaths around the globe. By the year 2040, the global burden is anticipated to rise to 27.5 million new cases of cancer and 16.3 million cancer deaths simply on account of aging of the population. These factors are anticipated to drive the growth of the market over the forecast period.

Extreme consumption of tobacco in different forms may potentially lead to cancer such as lung, esophagus, throat and mouth cancer as it contains harmful carcinogens which have the potential to initiate cancer. For treating cancer, various types of therapies and surgeries are used. According to World Bank, it is reckoned that, more than 7 million people every year worldwide die on account of tobacco consumption as compared to tuberculosis and malaria combined. If this trend continues, the tobacco consumption will kill more than 8 million people globally by the year 2030. The increase in tobacco consumption and tobacco related deaths are anticipated to support the growth of the market.

Proton therapy is a new technology that is used to treat cancers with lesser side effects as compared to other therapies in the market. The average cost of proton therapy ranges approximately from USD 30,000 to USD 1,20,000. These factors are anticipated to limit the growth of the market over the forecast period.

The highest share of the proton therapy market is captured by the United States which can be attributed to increased focus on research and development in the country. Europe is expected to be in the second place as this therapy is extensively used in that region owing to the presence of high percentage of geriatric population across the region.

In Asia Pacific, the increase in the target population is increasing at an exponential rate. Additionally, rising awareness among people and increased expenditure in healthcare sector is anticipated to boost the market growth in the Asia Pacific region.

The global proton therapy market is further classified on the basis of region as follows: