Extensive insights into the Growth of Proppant Market amidst COVID-19

A proppant is a type of solid material which is typically sand or ceramic and is used to keep the hydraulic fractures open in the oil & gas applications. Proppant is mixed with a fracking fluid which differs according to its application during fracture creation. The form of proppant which is being used may be gel, foam or slick water. The strength of proppant increases with the increase in density of the mixture which also indicates higher viscosity accompanied by high flow rates. The rising underground excavation processes for oil and gas drilling uses the proppant owing to its high strength, conductivity and resistance to load.

The market is estimated to witness a significant growth on the back of extensive applications of the proppant in petroleum extraction. Additionally, these proppants support the hydraulic fractures with high efficiency and thus with rising oil production, proppant market is estimated to witness a high growth during the forecast period.  According to BP Stats, the oil production showcased an upliftment from 2017 to 2018 in North America from 20157 to 22587 thousand barrels/day and Middle East from 31497 to 31762 thousand barrels/day is anticipated to facilitate the demand for proppant market during the forecast period. CLICK TO DOWNLOAD FREE SAMPLE 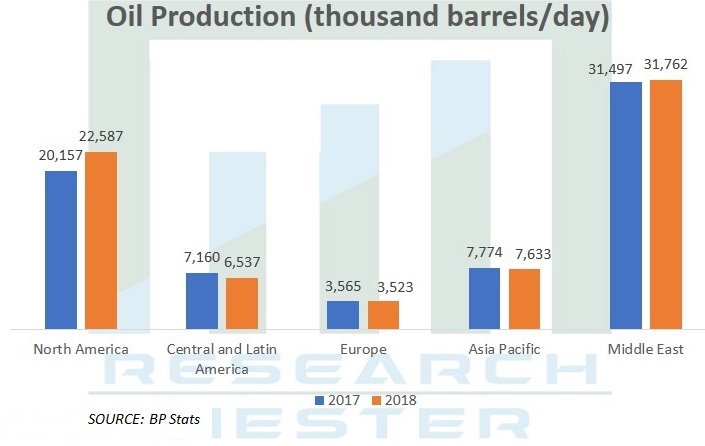 The proppant market is anticipated to record a CAGR of around 9% over the forecast period i.e. 2019-2027. The market is segmented by application into shale gas, tight gas, coal-bed methane, and others, among which, the shale gas segment is anticipated to observe the fastest growth over the forecast period on the back of growing natural gas excavation activities. The proppant market, by product-type is segmented into sand, resin coated, and ceramic, among which sand is expected to project high growth in the market during the forecast period on account of easy availability and low cost.

Proppants are widely used in hydraulically fractured wells for the extraction of shale gas. The rising demand for natural gas in different sectors as a fuel is expected to foster the growth of proppant market. Additionally, the rising demand for shale gas in US is propagating the extraction process which is anticipated to foster the growth of proppant market in North America during the forecast period. Moreover, the oil producing countries in UAE such as Abu Dhabi is driving the market for proppant market at a high pace.  For instance, Abu Dhabi National Oil Company has stepped up to install the hydraulic fracturing technology in 2018, for exploring shale gas onshore by fracking, is expected to project high demand for proppant in the Middle East region.

Proppants are generally used in extraction of crude oil in newly drilled and matured wells which is anticipated to foster the market growth at a fast pace. The countries which undertake more number of oil & gas drilling activities incur huge demand for proppant in the market. Additionally, the rising demand for oil and gas at global level as a source of energy is anticipated to propel the growth of the market at a substantial pace during the forecast period.

Proppant used in drilling and hydraulic fractures are known to have harmful environmental impact, which in turn affects human health.  On account of increasing underground oil & gas exploration activities, the number of hydraulic fractures have also increased, which has resulted in ground water contamination. This factor is projected to negatively impact the market growth.

The proppant market in North America region is anticipated to witness a noteworthy growth over the forecast period. This can be attributed to rise in number of oil and gas extraction along with numerous excavation activities carried in the countries of this region.

Asia Pacific market is also expected to show a considerable growth owing to the increase in hydraulic fracturing projects in the countries such as China and India. Additionally, Middle East is also expected to witness a prominent growth in the proppant market owing to the Abu Dhabi’s Supreme Petroleum Council’s announcement for new discoveries of gas for about 15 trillion standard cubic feet. This has added UAE’s total gas reserves by 7%.

Europe is also expected to observe substantial growth in this market on the back of growing economies such as Poland, Belarus, Russia and others coupled with oil requirements in forms of energy during the coming years.

The proppant market is further classified on the basis of region as follows: