Parkinson’s disease is a progressive neurodegenerative disorder which affects the movement and falls under the category of motor system disorders. It affects the nerve cells of the brain that secretes dopamine. These neurons are located in specific areas of the brain known as substantia nigra. Its symptoms are postural instability, tremors, slowness of movement, rigidity and many more. There is no specific cure for this disease, but, with the help of medications, symptoms can be improved. There is a risk of dementia in the later stages of Parkinson’s disease. People suffering from anxiety and severe depression are at a high risk of acquiring Parkinson’s disease.

The symptoms associated with this disease are caused by the loss of nerve cells (neurons) which are responsible for producing a chemical messenger in the brain, a neurotransmitter that is also known as dopamine. The potential cause of this disease is unknown, but there are several factors that play an important role such as environmental factors and genes. There are genetic mutations which can cause the disease or they are responsible for acquiring it. There are some effective drugs which are used for Parkinson’s disease management which includes carbidopa-levodopa, dopamine agonists, carbidopa –levodopa, MAO-B inhibitors, COMT inhibitors, amantadine, Anticholinergics and many more.

The market is observing robust growth on account of rise in the incidence of several neurodegenerative disorders coupled with the growing geriatric population. Increasing investment in the research and development and the availability of drugs in the pipeline are some of the factors which are anticipated to grow the market. Further, increased investment and technological advancements and up gradation in the healthcare sector along with growing awareness regarding the disease are some of the driving factors which expected to bolster the growth of the market over the forecast period i.e. 2019-2027.

The global Parkinson’s disease drugs market is anticipated to record a CAGR of 7.0% over the forecast period. The market is segmented into marketed drugs and pipeline drugs. The marketed drugs segment is further sub-divided into dopamine agonists, apomorphine, glutamate antagonist, levodopa, anticholinergics, COMT inhibitors, MAO-B inhibitors and others. The levodopa combination therapy is anticipated to have the largest market share in the overall marketed drugs segment on account of the potential benefits which are witnessed after its administration in the body. The levodopa combination therapy is an effective treatment which is responsible for controlling the motor symptoms throughout different stages of Parkinson’s therapy. 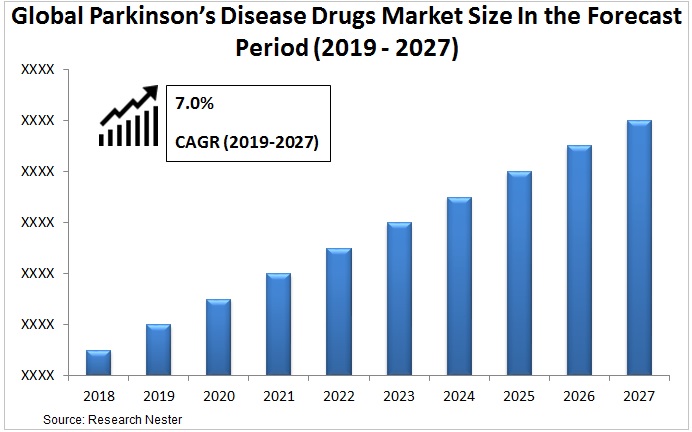 The Parkinson’s disease is commonly termed as older person’s disease and is generally diagnosed in people who are more than 60 years of age. It is one of the most common age-related progressive neurodegenerative disorder apart from the Alzheimer’s disease. Death of neurons in the substantia nigra pars compacta is largely responsible for this disease in the elderly. According to statistics by the World Bank, the total geriatric population was 8.482 percent of the total worldwide population in the year 2016 which enhanced to 8.696 percent of the total population during the year 2017. The elderly population is more prone to the Parkinson’s disease. Therefore, this increase in the geriatric population around the globe is anticipated to fuel the growth of the market over the forecast period.

This disease is affecting many people around the globe with stress and depression as the major cause behind it. According to Parkinson’s Foundation, more than 10 million people across the globe are living with the Parkinson’s disease and approximately one million people are expected to live with it in the United States, by the year 2020. Its incidence rate increases with age. The disease is most common in men as they are 1.5 times more likely to acquire Parkinson’s disease than women.

There are certain side effects which are associated with the Parkinson’s disease drugs such as impulsive and compulsive behavior, delusions or hallucinations, wearing off and dyskinesia. These side effects are expected to be limiting factors that are estimated to affect the growth of the market over the forecast period.

North America region is anticipated to have the largest market share in the global market of Parkinson’s disease drugs which can be attributed to growing geriatric population, rising awareness regarding the disease and appropriate reimbursement policies across the region. Parkinson’s disease is the second most common disease in the United States, which is further expected to hone the market growth in the North America region.

Europe market is anticipated to hold the second largest market share on account increasing investment in the research and development in the field of Parkinson’s disease, growing rate of awareness amongst people regarding the same and rising geriatric population.

The global Parkinson’s disease drugs market is further classified on the basis of region as follows: