Non-volatile memory is electrically programmable and erasable memory that is utilized for storing changes in a particular location within the storage device and is capable of retaining the change even in case of a power outage. Non-volatile memory is used for long term persistent storage of data. NVM uses user-configurable technology which does not need periodic refreshment of the memory. The memory devices such as flash disk, magnetic tapes and hard-disk are some of the major examples of NVM. Consumer electronics is one of the major application segments of the NVM. The main property of NVM is that it can store large data with less power usage and high reliability.

The global non-volatile memory market can be segmented on the basis of type, application and end-use industries. On the basis of application type it is further sub-segmented into automotive application, enterprise storage, consumer electronics, healthcare monitoring, industrial and power & energy distribution. Consumer electronics sub-segmented is anticipated to grow at the fastest rate on the account of rapid development in electronics segment. The technological development such as 3D XPoint, MRAM, SONOS, NRAM, CBRAM, NVDIMM, FeRAM and etc, is anticipated to boost the market growth for non-volatile memory.

Our in-depth analysis segmented the global non-volatile memory market in the following segments:

The global non-volatile memory market is further classified on the basis of region as follows: 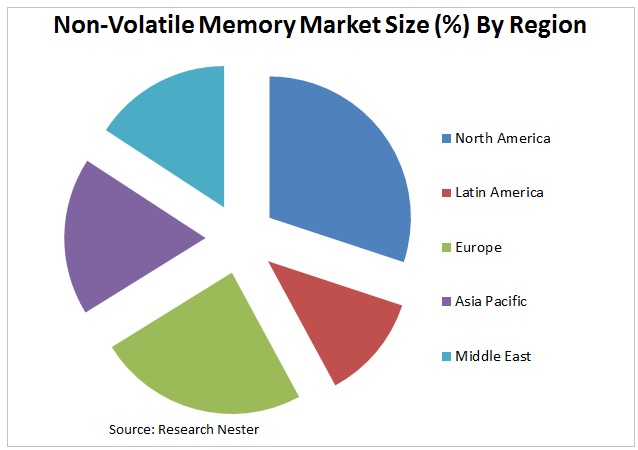