Non-invasive prenatal testing is a screening test that analyzes the free-floating DNA fragments present in the blood of pregnant women. This helps in the determination of any abnormalities or birth defects that might be present in the fetus. This technique is particularly useful since the detection of any genetic diseases can be done after which the treatment can begin at the earliest possible stage. The NIPT screening detects chromosomal disorders that might arise in the fetus due to DNA mutations. The market for non-invasive prenatal testing is projected to grow by a CAGR of 12.80% during the forecast period, i.e., 2020-2027. The market value is anticipated to reach USD 6,406.77 million by 2027 from a value of USD 2,168.79 million in 2018.

The global non-invasive prenatal testing market is segmented by regions into North America, Latin America, Europe, Asia-Pacific and Middle East and Africa, out of which, the markets in North America and Europe are anticipated to hold significant shares. The changing environmental conditions associated with various genetic health disorders such as cancer is anticipated to be a growth driver for the non-invasive prenatal testing market. Further, the demand for such testing procedures is high on account of the exposure to x-rays and gamma rays is highly prevalent among people as a result of increasing nuclear energy usage. The non-invasive prenatal testing market in the U.S. is estimated to attain a market size of USD 2,318.81 million and observe a CAGR of 12.52% during 2020-2027. This substantial growth can be attributed to the rising cases of Down syndrome, which, according to the United Nations, has affected around 250,000 families in the United States. However, the market in Asia Pacific region is projected to grow at the highest rate during the forecast period on account of rising investments by various government and private organizations in the research and development industry. 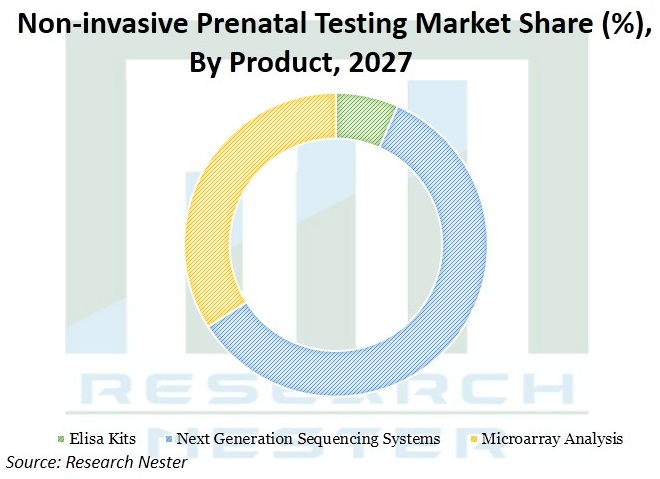 On the basis of application, the global non-invasive prenatal testing market is segmented into aneuploidy, micro-deletion, trisomy and others. The trisomy segment is estimated to hold the largest share in the market as NIPT is majorly used for the detection of rare fetal trisomy. Moreover, around 99% cases of fetal trisomy can be identified using this method. Fetal aneuploidy, micro-deletion and monosomy can be detected with non-invasive prenatal testing as well. Furthermore, other chromosomal disorders such as monogenic disorders can be tested for through this method.

Based on end user, the market is segmented into hospitals, diagnostic labs, clinics and others, out of which, the largest share is predicted to be held by the hospitals segment. The number of hospitals in growing globally as a result of better treatment and care provided there. The rising demand for non-invasive prenatal testing is another factor estimated to contribute towards the large share of hospitals in the market. On the other hand, the diagnostic labs segment is anticipated to grow at the highest rate during the forecast period. This can be attributed to the rising preference of diagnostic lab on account of presence of skilled physicians and diagnostic equipment in diagnostic labs. Moreover, other healthcare facilities such as ambulatory surgical centers and specialty clinics are increasing and thus raising the demand for NIPT. 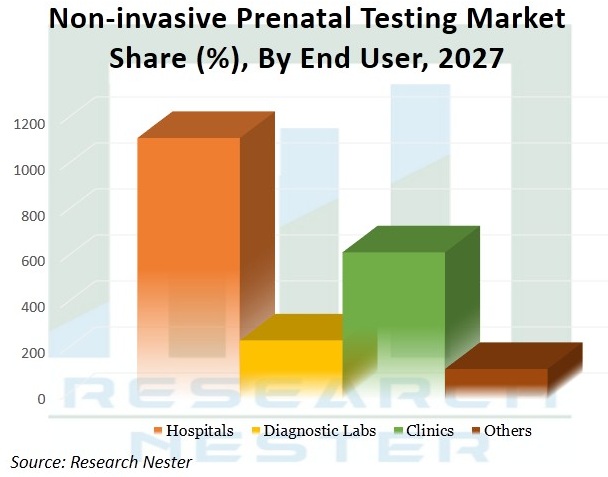 One of the major factors responsible for growth of the market is the risk of chromosomal abnormalities among children. According to March of Dimes, about 1 in 150 babies are born with abnormal chromosomal conditions. These conditions, such as Down syndrome, might result in miscarriages as well. Chromosomal disorders might lead to various heart defects which require surgical treatments and regular monitoring. The necessity of prenatal testing for the detection of such disorders at an early and developing stage is predicted to result in the growing demand for non-invasive procedures for prenatal testing. Moreover, the non-invasive nature of this technique further raises its demand and introduction into various healthcare settings. 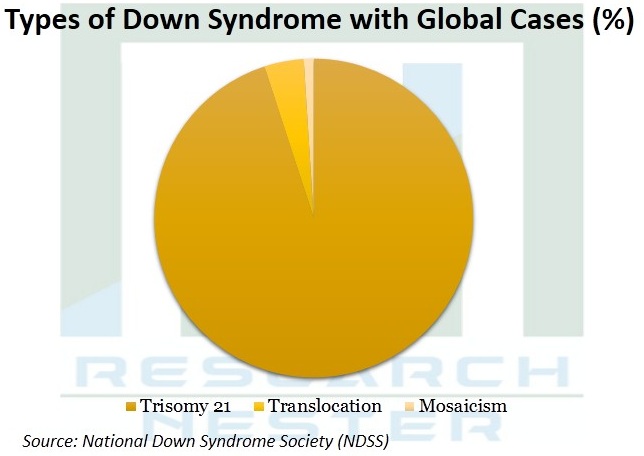 Despite the advantages of using this technique for the detection of chromosomal disorders, there are certain factors that restrict the market growth. According to the Journal of Down Syndrome & Chromosome Abnormalities, a survey was conducted in 2018 wherein 500 females with mean age 30.86 (from 18 to 47) were randomly selected from the big cities of Bulgaria. This survey was carried out to investigate women’s awareness towards prenatal Down syndrome tests in the country. As a result of the survey, it was found that 76.3% of women received information about the different tests option from their obstetricians. The rest 23.7% were self-educated. In total 68.5% of the females were satisfied with the Down syndrome tests information provided by their obstetrician. When asked about the non-invasive prenatal test, it was reported that 40.2% did not know about it, 44.4% defined their knowledge about the amniocentesis as very good or good and only 13.0% wished to undergo this procedure, if required. According to the results, for 68.8% women the accuracy of the test was the most important prospect when choosing a method for Down syndrome testing. It was concluded that there is a lack of knowledge about the offered screening and diagnostic tests for Down syndrome, especially NIPT. This is the main barrier to the market and is anticipated to hamper the market growth in the near future.

What are the major factors driving the growth of the non invasive prenatal testing market?

Increasing demand for non-invasive procedures for prenatal testing for the detection of numerous health disorders at an early and developing stage are some of the major factors that are driving the growth of the market.

What would be the CAGR of non invasive prenatal testing market over the forecast period?

The market in Europe is anticipated to display significant business opportunities in the future.

Who are the major players dominating the non invasive prenatal testing market?

What are the major segments in the global non-invasive prenatal testing market?

The market is majorly segmented by product, application, end-user and by region.

What can be the significant growth opportunity for the product segment in the non-invasive prenatal testing market?

The next generation sequencing systems segment, which is a sub-segment of the product segment, held the largest market share in the year 2019 and is anticipated to display significant growth opportunity.

Concerns for the lack of knowledge about the offered screening and diagnostic tests for Down syndrome is one of the major factors anticipated to act as a barrier towards the growth of the global non-invasive prenatal testing market.