The global next generation ultrasound system can be segmented on the basis of end-user. On the basis of end-user, it is further sub–segmented into hospitals, diagnostics laboratories and imaging centers, clinics and ambulatory surgical centers. Hospitals sub-segment is anticipated to be the fastest growing sub-segment on the account of increasing number of patients coupled with easy availability of diagnosis.

By region, global next generation ultrasound system is segmented into North America, Asia-Pacific, Latin America, Europe, Middle East and Africa. North America contributes the largest market share of the global next generation ultrasound system market and is anticipated to lead the segment throughout the forecast period. This is attributed to the fact of high acceptance of portable devices by various end users. Additionally, U.S. accounted largest market share in North America on the back of high penetration of devices in the country. However, Asia-Pacific is anticipated to observe robust growth in the forthcoming years on the account of rising popularity of portable devices across the globe.

Our in-depth analysis segmented the global next generation ultrasound system in the following segments:

Global next generation ultrasound system is further classified on the basis of region as follows: 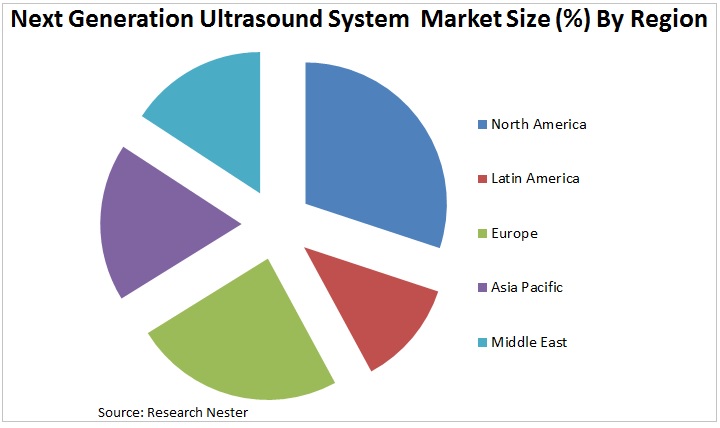