Neurostimulation devices or nerve stimulator devices aid to provide control using the electrical stimulation of specific nerves in the body. Neurostimulation devices are commonly used for diagnosing and treating disorders of automatic nervous system (ANS), central nervous system (CNS) and peripheral nervous system (PNS). Diseases that do not respond to systematic drug therapies need advanced stimulation devices for treating them. These devices are highly beneficial in reducing pain of neurological orders such as chronic pain, epilepsy, major depression, Parkinson disease and others. They also help to reduce the pain of paralyzed patients. These devices are operationally set in the patient’s body and functions are performed by thin wires or leads. New technologies are being developed and researchers are revealing more potential uses of this treatment which is fueling the demand for safe and cost-effective treatment options. Higher cases of nociceptive pain arising from diseases such as cancer, arthritis and diabetes is compelling healthcare experts and manufacturers to join hands and collectively work to develop enhanced models of neurostimulation devices.

The global nerve stimulator market is anticipated to record a CAGR of around 12.6% during the forecast period i.e. 2019-2027. The market is segmented by product, application and end user.  By end-user, the hospitals segment is anticipated to have significant growth on account of usage of different types of nerve stimulator devices to diagnose and monitor various neurological disorders. 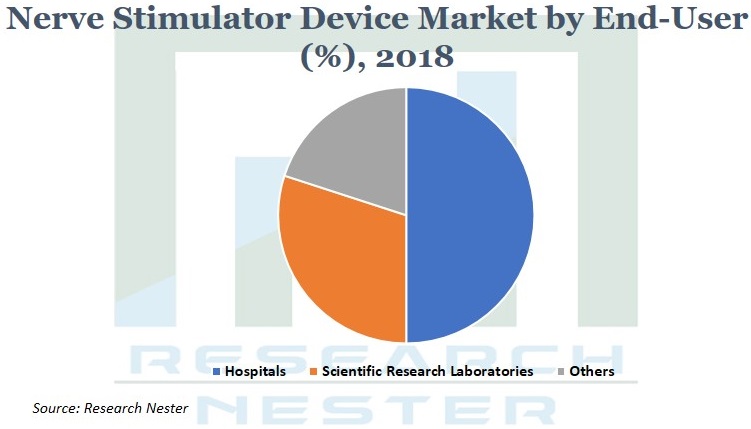 Increase in prevalence of chronic diseases such as migraine, epilepsy etc.  due to unhealthy diet and lifestyle which may require neurostimulation treatment later, is expected to boost the growth of the nerve stimulator device market.

With the rise in the geriatric population in the world, the threat of being prone to various disease has showcased an inclination which includes diseases such as Parkinson’s disease, Alzheimer’s and others which require neurological treatment that can be done with the help of nerve stimulator devices. Rising geriatric population is expected to boost the growth of the nerve stimulator device market.

More investors in R&D by the manufacturers

The demand for nerve stimulator devices is expected to increase attributing to different reasons which include rising geriatric population, increasing prevalence of chronic diseases and others owing to which the investors are investing more and more in the R & D of such devices to make them more efficient and effective. This is further expected to boost the growth of the nerve stimulator device market.

Neurostimulation device implantation is known as an invasive process. Demand for such surgeries are increasing owing to shorter hospital stays and faster recovery which is expected to boost the market growth.

Availability of other options of treatment

The cost of nerve stimulator devices is high which pushes the customer towards other available options of treatment for neurological disorders which is expected to hamper the growth of the market.

Our in- depth analysis of the nerve stimulator device market includes the following segments:

North America and Europe are expected to hold major share in the global market owing to growing awareness regarding preventive care, increasing neurological diseases such as epilepsy, migraine, Parkinson’s disease, and incontinence, emerging technologies in the neurostimulation devices market and the gradual shift of preferences of the patients towards utilization of advanced medical devices. Asia Pacific is expected to grow at a high pace on the back of increasing economic growth, presence of a vast patient pool, improving healthcare facilities largely owing to the expansion of both public and private sector companies that have been collaborating with multinational healthcare establishments to provide better treatment options. Latin America and Middle East and Africa nerve stimulator market are expected to grow significantly owing to the rapidly growing healthcare infrastructure, robust opportunities in the region and as well as availability of funds provided by the government to the manufacturers to conduct research activities for improved patient care.

The nerve stimulator device market is further classified on the basis of region as follows: