Neonatal & prenatal devices are used for the purpose of diagnosis, monitoring as well as therapy of maternal as well as fetal health. In the past decade, the emphasis on the health of both the mother and her baby has significantly increased on the back of growing urbanization, rising disposable income as well as increased literacy rate across the developing countries of the world.

The neonatal & prenatal devices market is anticipated to record a CAGR of 6.32% over the forecast period i.e. 2019-2027. This growth is attributed to the increasing initiatives by regulatory organizations to reduce infant mortality. Rising urbanization with increasing aware population regarding prenatal and neonatal health issues is estimated to drive the market considerably during the forecast period. Additionally, increasing demand for prenatal testing has persuaded the market players to come with novel equipment to ensure a regular inflow of demand and to keep the competition from smaller players at bay. Leading market players making heavy investments in the production and manufacturing of equipment accompanied with entering into agreements with the healthcare centers is attributed to aid the market growth across the globe.On the basis of regional platform, the global neonatal & prenatal devices market is segmented into five major regions including North America, Europe, Asia Pacific, Latin America and Middle East & Africa region.

North America is estimated to induce a significant growth in the market of neonatal and prenatal devices on the back of high awareness rate regarding the health of expecting mothers and the newborns along with the presence of affirmative healthcare bylaws across the region. Further, Europe is anticipated to display a budding growth on the back of increasing healthcare expenditure across the region accompanied with increasing demand for monitoring devices owing to the rising number of working population.

Asia Pacific is panned to follow North America market of neonatal and prenatal devices on account of rising pregnant women receiving prenatal care across the region which can be attributed to the increasing awareness and healthcare expenditure. For instance, pregnant women receiving prenatal care across China has increased from 92.2% in 2010 to 96.2% in 2015 which is estimated to boost the demand for neonatal and prenatal devices during the forecast period.

On the back of government initiatives to provide better healthcare to the newborns as well as the mothers that are expecting, the market for neonatal and prenatal devices has extensively expanded over the past which is further expected to propel steadily during the forecast period. The estimates of UNICEF, WHO, World Bank, UN DESA Population Division reported a decline in the number of neonatal deaths from the year 2010 numbering at 3,060,652 to 2,533,434 in the year 2017. Moreover, various initiatives taken by the public along with private organizations to increase the awareness regarding these devices and reduce the overall neonatal mortality rate are estimated to drive the neonatal and prenatal devices market over the forecast period. Moreover, increasing incidences of pre-term births across the globe on the back of increasing adoption of sedentary lifestyles and getting pregnant at older ages causing various prenatal problems are further expected to drive the market.

On account of increasing personal disposable income around the globe and rising healthcare expenditure, the demand for these devices is anticipated to increase in upcoming years. Further, the rising emphasis on maternal healthcare as well as increasing demand for prenatal diagnostics and therapeutics is estimated to accentuate the growth of the market rapidly across the globe. Growing technological advancements, urbanization and rising working women population are some of the major factors that are attributed to boost the global shares of the neonatal & prenatal devices market over the forecast period.

Furthermore, increasing number of fetal disorders due to changing environment conditions have increased the demand for respiratory equipment and ventilators for immediate treatment at birth for the new born babies who are often unable to breathe or require proper temperatures to survive the sudden change in environment. These factors are expected to drive the growth of the market during the forecast period.

Declining Birth Rates across the Globe

However, the birth rates around the globe are rapidly declining on the back of increasing focus on career among women, rising government initiatives across developing nations to control the number of births as well as increasing adoption of sedentary lifestyle. These factors together have resulted in decrease of infant mortality rate from 37.2% in 2010 to 29.4% in 2017. This number is further expected to drop during the forecast period which is predicted to adversely impact the global neonatal and prenatal devices market over the forecast period.

Global neonatal & prenatal devices market is further classified on the basis of region as follows: 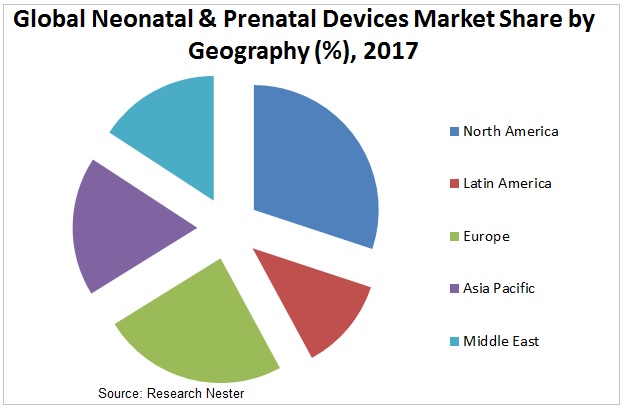