Measles, mumps and rubella are three common contagious airborne diseases that are caused by virus, transmitted by sneezing and coughing of an infected person, which can arise to serious complications or death. Vaccines of these diseases are sold as attenuated viral vaccines, manufactured in a lyophilized formulation, which requires reconstitution with water for injection diluent and are available in two forms i.e. monovalent as well as combinational vaccines. Combinational MMR vaccines comprise of mixture of two or more viral strains. These vaccines are administered by subcutaneous injection to children as well as adults. It is mostly administered to children aged 1 year and second dosage can be administered as early as one month after the first dosage. According to Center for Disease Control and Prevention (CDC), two doses of MMR are 97% effective against measles and 88% effective against mumps.

Measles, Mumps and Rubella (MMR) causes cough, fever, rash, headache and severe complications such as inflammation of ovaries and testicles, deafness including death. To prevent birth defects due to rubella, pregnant women are vaccinated for MMR vaccines. The virus replicates in the respiratory tract and is transmitted to others via respiratory secretions through aerosolized droplets in closed areas such as schools and offices. The average appearance of the symptoms is 10-12 days after the infection, which is usually fever. However, the MMR vaccines should not be given to individuals who are on immunosuppressant as the virus can replicate and cause infections. Disease indication, included in the vaccines market include influenza, pneumococcal disease, Diphtheria, Tetanus and Pertussis (DTP), rotavirus, hepatitis, polio, varicella, meningococcal disease, MMR, Human Papilloma Virus (HPV) infection, and others. High incidence of pneumococcal infections is driving the growth of this market. 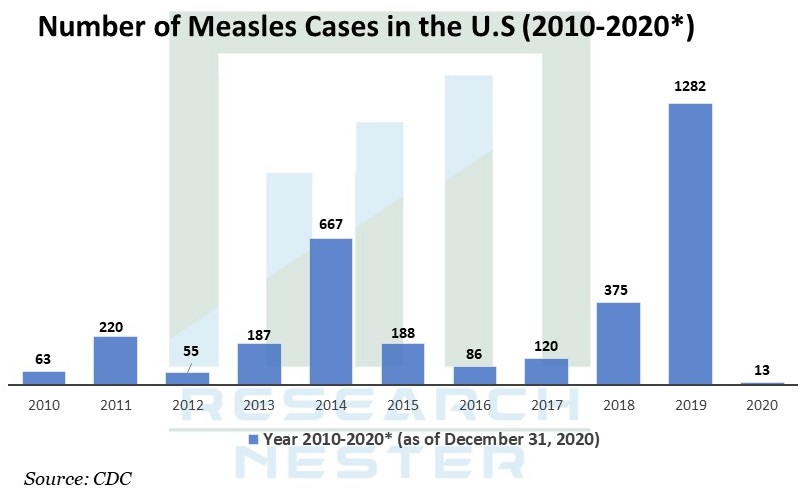 Vaccine manufacturers are focusing on partnering with organizations such as WHO, UNICEF and GAVI Alliance to improve their vaccination programs, in order to reach the maximum population to offer vaccines. In spite of several governmental initiatives, measles is leading cause of death among young children. Thus, increase in success rate of vaccination schemes depends on government initiatives of each country.

Rising air pollution levels owing to growing industrialization is leading to propel the airborne diseases globally such as measles which is a significant airborne disease. Initial symptoms related to this disease include fever, cough, redness in the eyes and running nose coupled with rashes in the body.

Side effects related to vaccinations could be a major factor restraining growth of the MMR vaccine market. For instance, in 1998, Japan stopped using trivalent combinational measles, mumps, and rubella vaccine owing to outbreak of non-viral meningitis and other damaging side effects which will restrict the MMR vaccine market growth. Moreover, high cost of single dosage of vaccine is another restraining factor for the market growth. Limited number of vaccines, stringent manufacturing and approval criteria along with gap between demand and supply during disease outbreak, and special storage and handling leading to high cost of measles, mumps and rubella vaccines are other factors affecting growth of the market.