Antibodies are immunoglobulins (Ig) which are naturally produced by the immune system, whenever an antigen (foreign particles) invades in our body. These antigens include various types of microorganisms or viruses. Antibodies play a very crucial role in the body’s defense mechanism. The immune system of an animal can produce large group of antibodies which recognizes specific epitopes of an antigen.

Monoclonal antibodies are the antibodies which are produced in a laboratory from a clone of single B-cell. They recognize and bind to specific receptors present on the surface of cells. These antibodies are identical in nature, technically termed as identical immunoglobulin and are used to detect several disease agents and for diagnostic applications as well as for the treatment of cancer.

The monoclonal antibodies are produced with the generation of monoclonal antibodies producing cells which are called hybridomas. Mice are injected and immunized with an antigen and the generation of antibody production is screened. Antibody generation splenocytes which are the B-cells are isolated for the in vitro hybridoma production. Spleen cells are fused with the myeloma cells to form hybridomas in the presence of polyethylene glycol (PEG), which is responsible for the fusion of membranes. According to the antigen specificity and the class of immunoglobulin, clones are screened and selected. Potential high producing colonies are confirmed, validated and characterized. Scale up and expansion of antibody producing clones are done in large bioreactors or large flasks.

The market is observing a vibrant growth on account of increasing prevalence of chronic diseases as well as increase in the demand for biologics. Further, the advances in technology in the field of genetics platforms which includes next generation sequencing (NGS) along with cost effectiveness of technology which are needed for research purposes to produce monoclonal antibodies are anticipated to contribute to the growth of the market. 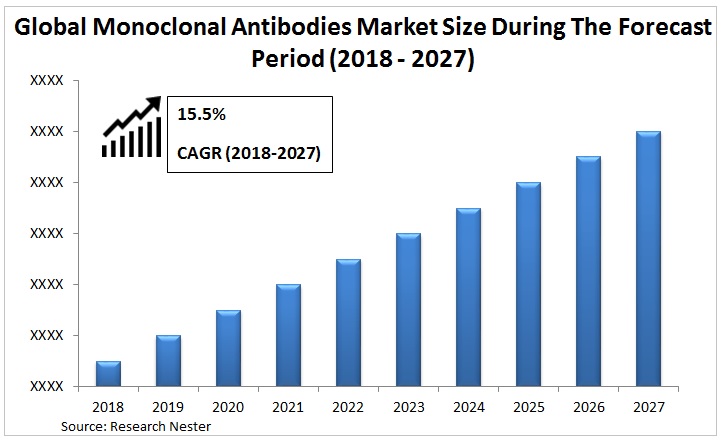 As per the report of World Health Organization, the global cancer burden has increased to 18.1 million new cases and the number of deaths due to cancer was 9.6 million in 2018. The worldwide increase in the cancer cases is one of the most important market drivers behind the growth of global monoclonal antibodies market as the monoclonal antibodies are extensively used for the treatment of cancer. They find and recognize several proteins on cancerous cells.

One of the most important factor which is restraining the market growth is the high price associated with monoclonal antibodies as they are expensive both at the developmental stage and at the end use stage. Further, the escalating cost of research and development processes and growing price of treatments which are using monoclonal antibodies are estimated to restrain the growth of the market.

North America is expected to dominate the global monoclonal antibodies market as there are many established healthcare infrastructures around the region. Additionally, government is also putting more emphasis on infection and disease control. In the upcoming years, funding by the government will increase on research and development activities of cancer. These factors are anticipated to augment the growth of the market in this region.

Europe is expected to show a significant growth in the market due to increase in the prevalence of autoimmune diseases, rise in cancer population and increased funding in research and development activities in the field of monoclonal antibody therapeutics across the region. Further, the market in Asia-Pacific is expected grow significantly which can be attributed to the increase in spending capacity of people along with growing awareness among the patients.

The global monoclonal antibodies market is further classified on the basis of region as follows: