Mixed reality (MR), also referred to as hybrid reality is a technology wherein, a confluence of real and virtual worlds takes place by which they also co-exist and communicate with each other. Virtual objects comprises of various forms that include videos, images or even any interactive data. By using MR technology, the users can, either through their hand gestures or their voices or eyes communicate with virtual content.

Smart glasses are computer glasses which can be worn by individuals that also contain information which is displayed on the lenses, by which the individual is able to view such information by wearing these glasses. Mixed reality smart glasses are technology enabled devices that perform a variety of functions such as tracking of movements, relaying information, while at the same time allowing the user to visualize the real world. These glasses are loaded with inbuilt sensors, LED indicator, RGB Camera, IR Detector Camera and many more.

The mixed reality glasses is anticipated to witness a marginal rise in demand, owing to several factors that affect the purchase of these glasses such as technological advancements, availability of both wireless and tethered facility options and the growing number of smartphones and smart devices users globally across all regions.

The mixed reality glasses market is anticipated to grow at a moderate CAGR over the forecast period i.e. (2020-2027). The market is segmented by connectivity, application and by distribution channel. The online channel forming part of distribution channel segment is anticipated to achieve the highest market share, owing to the increase in the number of consumers transacting online that is offering various benefits and convenience to the consumers who are able to enjoy the facilities of discounts offered through online purchase and also the products being delivered at their doorsteps.DOWNLOAD SAMPLE REPORT HERE 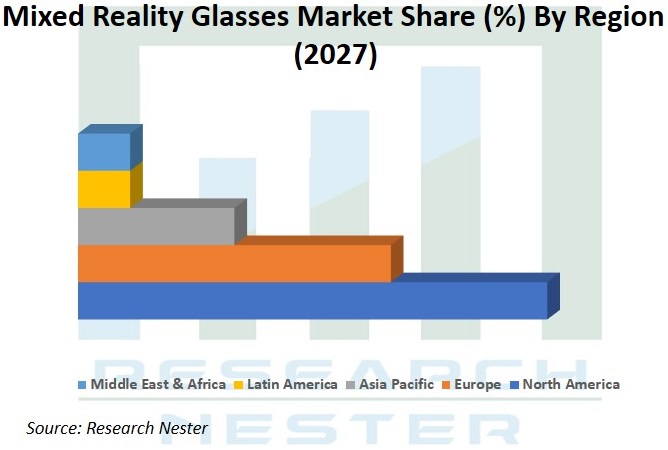 The emergence of IoT which is nothing but a network of physical objects that can include vehicles, buildings or any other items that are attached to sensors, software or any electronic item, so that these objects can accumulate and exchange data. Through IoT, internet connectivity to various devices can be provided and the user can exercise control over devices, be it a laptop or mobile to any other physical objects including communication with these devices through internet. This technology is considered to be a major game changer globally. Mixed reality glasses are aimed at bringing in ergonomics to user experience which aims at optimizing user efficiency at work. Apart from that, the immersive feature of these glasses are helping improve the accuracy of the users by letting them focus on intricate and minute details for obtaining better results.

There are a lot of opportunities for various consumer-end industries who can take advantage of MR technology that has considerable potential for being applied for a variety of purposes. For instance, an image drawn by any individual on a piece of paper can be translated by MR glasses into a 3D image and project how it would appear on screen. MR smart glasses can in a way provide a proper perspective for the consumer, as it can help the user visualize in order to understand how a particular product or object would appear and what are the benefits and problems that could arise out of its usage. These glasses will find their applications in interior design works, where there would be various minute details that may be required to be observed by users. Apart from that, various industries, particularly the consumer-end industries such as retail, entertainment, fashion, services, tourism and other industries are anticipated to immensely benefit from the use of MR technology. Consumers can expect better personalized services from their service providers, as MR glasses can help the consumers to foresee how the product will look and how it would perform before purchase, solving any problems that may arise while using the product, including repair or maintenance issues after purchase, where they can receive instructions directly in order to identify the problems and also resolve them at the earliest possible time.

With this technology, a 3D mapping of a specified area can be performed. In a virtual world environment, objects are displayed through a device, but they are not actually present. With the help of such a device that displays objects that actually do not exist, the users communicate through a technological interface. Mixed reality provides the platform for the user to communicate with both virtual and real objects by anchoring virtual objects with the real world. This technology can be adopted as an alternative by any industry that has already adopted either virtual reality or augmented reality technology.

Mixed reality glasses are highly expensive and are only targeted at premium customers who can afford to bear the cost of these high priced smart glasses. Moreover, being a new technology, there is a lack of general awareness about the product. Additionally, as the technology is only at its infant stage, the application of these mixed reality glasses for commercial uses have not yet seen the light of the day, owing to the novelty value that they carry along with them.

The market in North America is anticipated to occupy the leading market share, owing to high technological advancements taking place in the region and the presence of leading manufacturers of mixed reality smart glasses along with the presence of necessary infrastructure for introduction of advanced technologies at a faster pace. The market in European region is anticipated to grow at a steady rate, owing to the preference of the population to own high technology luxury devices.

The mixed reality glasses market is further classified on the basis of region as follows:

Mixed reality technology is just an extension of augmented reality and virtual reality technology, currently only at its nascent stage of development, is slowly occupying the market space through innovations brought in by a few market players and every effort is being made to push this technology towards mainstream adoption.