Milk is a form of consumable liquid that is being used for consumption by consumers all over the world to restore their need for food and nutrition. Traditionally, milk was being made available by individuals who would own animals such as cows and buffaloes, being the main sources from where milk was being supplied for consumption by consumers. Milk is that product that would be able to extend its shelf life to a few weeks and maybe months, if the necessary technology and material with proper packaging is made available. The increasing shift towards urbanization had given rise to the concept of packaged milk becoming popularly used for consumption by consumers. Packaged milk is being made available in a variety of packaged forms, which involves the process of using relevant containers in the entire milk processing cycle. The demand for milk packaging has gained enough attention around the world over the last few decades, with various norms for milk processing including food safety requirements that have been laid down, in order for the milk processing organizations to adhere to and carry processed milk in specified containers. The expansion of production output across several nations such as India, Turkey, The European Union (EU), Pakistan, The United States of America (USA) and Argentina had helped increase the global milk output by 2.2 percent in 2018 as compared to 2017. According to Food and Agriculture Organization (FAO) of the United Nations, the global milk output was estimated at 843 million tonnes for the year 2018. 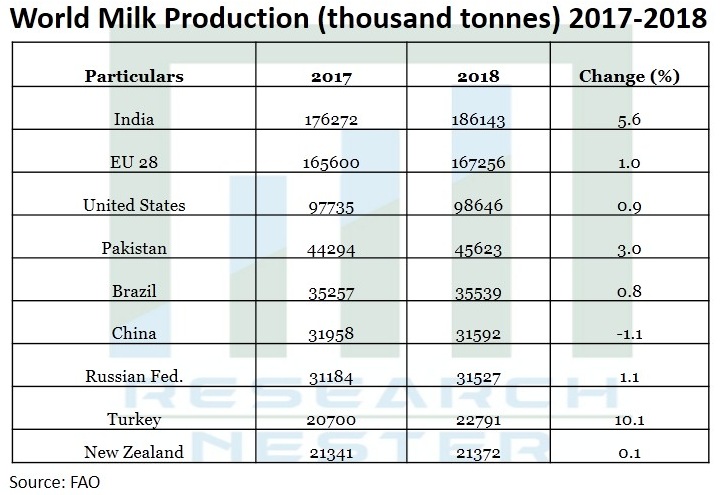 The growth of the market has been driven by factors such as increase in demand for milk across several regions of the globe. Additionally, rise in global population and growth in per capita incomes of the population across several regions are anticipated to drive the demand for milk packaging over the forecast period. According to FAO, world milk production is predicted to increase by 177 million tonnes by 2025 by growing at an average of 1.8 percent per annum over the next ten years. The United Census Bureau had released a data that stated that the median household income had been rising in the U.S. every year since 2013, barring only the year 2017 which saw a marginal increase in the income than the earlier three years. CLICK TO DOWNLOAD SAMPLE REPORT

The global milk packaging market is estimated to record a significant CAGR over the forecast period i.e. 2020-2027. The market is segmented by packaging and by material, out of which, the paperboard forming part of material segment is anticipated to occupy the highest market share, owing to the fact that the containers made of paperboard have the option of recycling and growing concerns and awareness on environment among the consumers globally towards protecting the environment which helps in ensuring sustainability. According to data released by EPA, PET bottles and jars had a recycling rate of 29.1 percent which was about 860,000 tons in 2017. The plastic segment is also anticipated to record significant growth, owing to its availability at lower prices that helps in the reduction of end product cost and convenience. 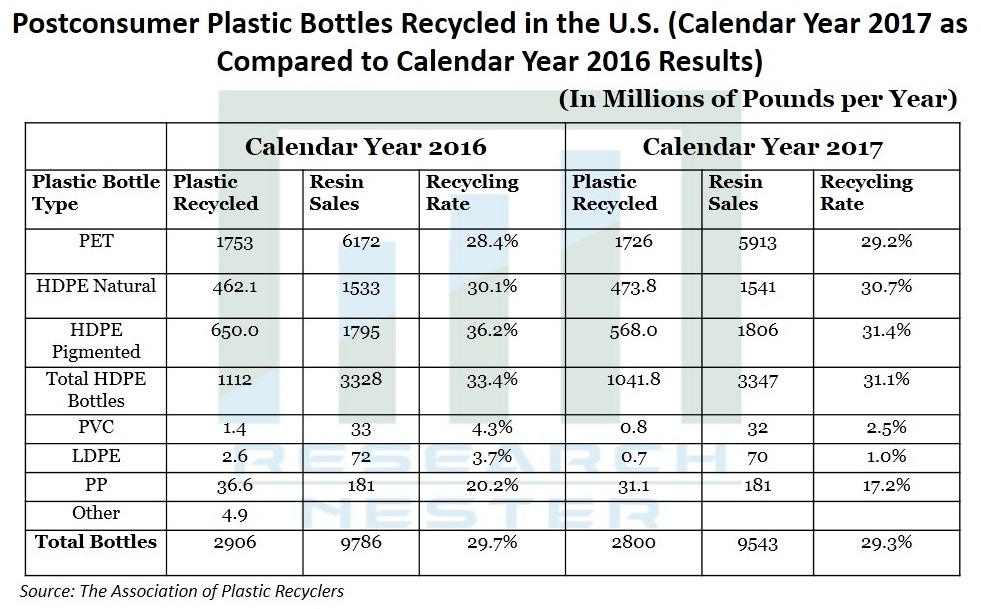 Growing Urbanization and Increase in Health-Conscious Consumers across the Globe

The growing number of individuals shifting to urban areas in search of livelihood has been increasing rapidly over the past few decades. Countries such as India and China in the Asia Pacific region have witnessed a rapid growth in urban population, owing to presence of better opportunities for earning a livelihood and lack of adequate jobs in the rural areas. The United Nations has predicted that the level of urbanization in Asia is close to 50 percent in 2018, with India projected to add about 416 million dwellers and China and Nigeria projected to add about 255 million and 189 million urban dwellers by 2050. The preferences of consumers to opt for consuming packaged milk is higher among the urban population. Further, International Dairy Federation has mentioned that Dairy Foods contain calcium, vitamins and high quality protein. Apart from that, the people are aware of the benefits that packaged milk provides which can help in better bone and dental health. It also states that increased dairy consumption can protect against obesity and weight gain and also helps to reduce the risk of type 2 diabetes and related cardiovascular disease. These factors are anticipated to raise the demand for packaged milk and are estimated to drive the growth of the market over the forecast period.

The growing interest among consumers to purchase and consume easy and conveniently packaged products is driving the demand for milk packaging around the world. The demand among the consumers for milk and milk products with longer shelf life has encouraged development of new processes and packaging in the cold chain distribution. These factors are anticipated to drive the demand for milk packaging among the consumers globally and contribute to the growth of the market over the forecast period. 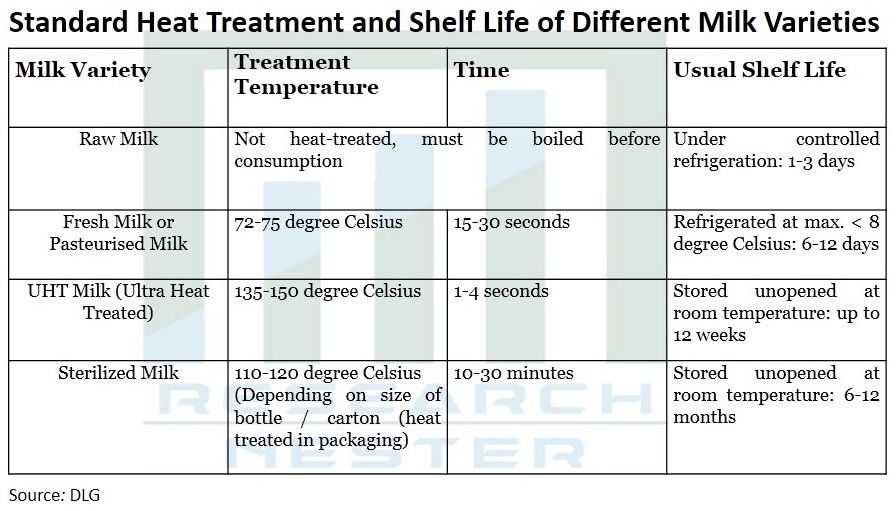 The growth of the global milk packaging market may be hindered by factors such as increasing fluctuations observed in the prices of materials such as plastic and paper and concerns related to dairy farming production being responsible for greenhouse gas emissions that may cause regulatory hurdles. All these factors are anticipated to act as major restraints to the growth of the market over the forecast period.

The market in Asia Pacific is anticipated to register a significant growth rate, owing to rise in the consumption of milk in the region, especially in countries such as China and India having the presence of a huge population. According to Food and Agriculture Organization (FAO), India is the largest producer of milk in the world, contributing about 21 percent of global production. The milk output increased by 3.9 percent since 2017 to 346.9 million tonnes in Asia. Additionally, milk production in India had grown by 5.6 percent in 2018. Moreover, rapid urbanization and a comparatively higher rate of milk consumption observed in Asian nations such as India is anticipated to raise the demand for milk packaging especially among the urban population in the region. The markets in Europe and the North America, especially the United States of America are anticipated to grow steadily, since both the regions are already key exporters of dairy products such as milk and other processed dairy products. According to Food and Agriculture Organization (FAO), the share of global exports of dairy products in the European Union is projected to rise from 27 percent to 29 percent over the period 2018-2027. 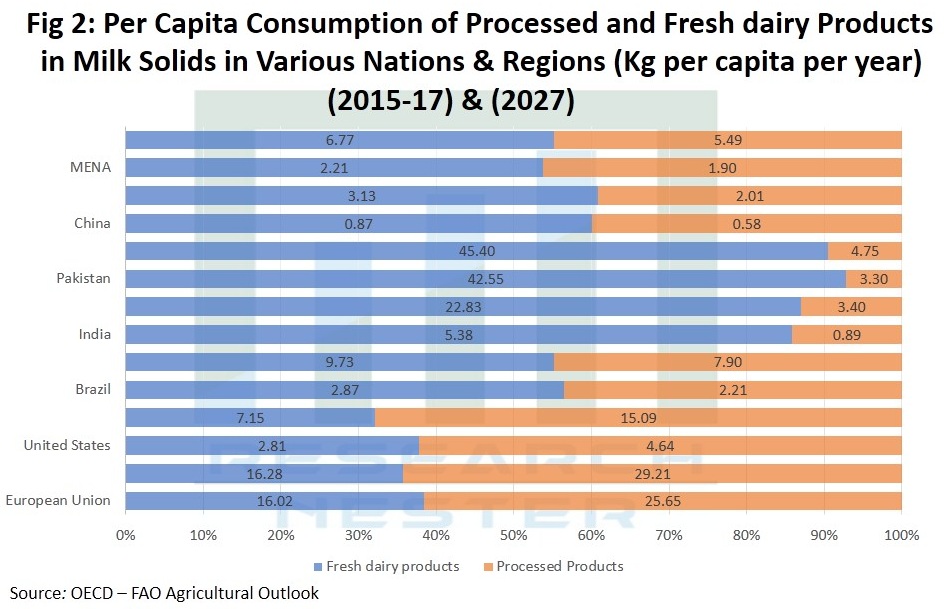 The global milk packaging market is further classified on the basis of region as follows: