Compressed natural gas (CNG) is an energy-efficient, odorless, and non-corrosive gas with a high-octane rating. It is a form of natural gas which is stored under high pressure. Methane is one of the major components of compressed natural gas. It is widely being used as an alternative fuel for conventional solutions. The Middle East and Africa (MEA) compressed natural gas (CNG) market is thriving on the back of increasing adoption of natural gas for use in several applications in the region as well as the need of the region to be less susceptible to the volatility of oil products in the market. Moreover, the region is also focused towards the diversification of its power supply and become less reliant on oil, which is raising the nation’s adoption towards CNG as an energy source. Additionally, increased focus towards the increase in production and trade of natural gas owing to the presence of large natural gas reserves in nations such as Iran and Qatar, along with the rising focus towards the development of gas pipelines in several developing nations in the region are some of the factors anticipated to promote towards the growth of the MEA CNG market. In the year 2018, the Middle East and Africa (MEA) compressed natural gas (CNG) market accounted for a market value of USD 9,341.1 million and it is expected to grow at a CAGR of 12.0%, over the forecast period of 2020-2027 by attaining a market value of USD 21,980.9 million in the year 2027. Moreover, according to the BP Energy Outlook 2019 report, the region has witnessed an increase in the share of non-fossil fuels and has further forecasted to reach around 13% in the year 2030 as compared to 1% in 2017. This can also be attributed to the increasing demand for natural gas obtained from the rising adoption of natural gas vehicles (NGV).

The Middle East and Africa (MEA) Compressed Natural Gas (CNG) market is segmented on the basis of source into associated, non-associated and unconventional gas. Since, most of the countries in the Middle East are still heavily reliant on oil as a main source of fuel, adoption of natural gas as a conventional fuel is still at relatively lower scale. While adoption of unconventional sources from extraction of natural gas is still at pilot stage, adoption of associated and non-associated gas in some countries has witnessed considerable increase in the past few years. The non-associated segment is anticipated to hold the largest market share of around 56.7% and attain a CAGR of around 11.7% during the forecast period. Presence of some of the crucial non-associated gas fields in the country, such as Karan, Arabiyah and Hasbah, along with the increasing exploration of these gas reserves which is attained at a comparatively lower cost is raising the interests amongst oil drillers to extract gas from non-associated gas reserves which is in turn contributing towards the growth of the segment in the MEA CNG market. CLICK TO DOWNLOAD SAMPLE REPORT 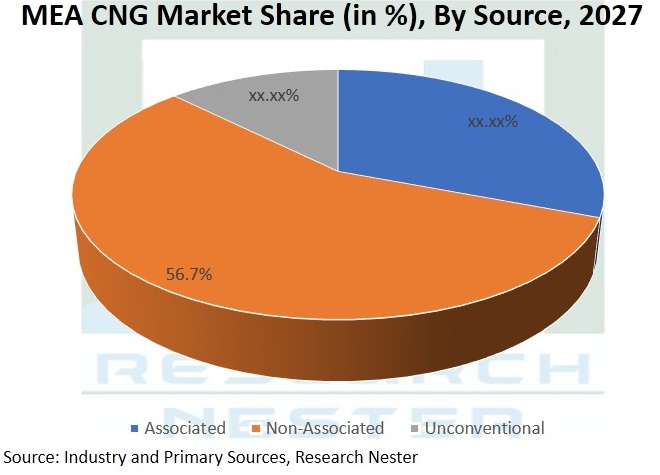 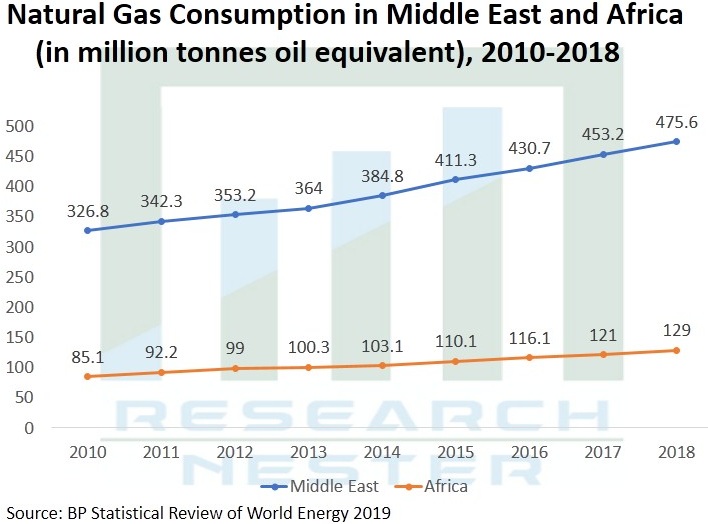 Consumption of energy has increased tremendously across nations around the globe. This can be attributed to the growing number of industries worldwide. As such, MEA region too has observed a significant increase in its energy consumption especially in the power and industrial sector. Both these sectors together accounted for 69% of the total increase in the energy consumption, according to the statistics by BP in its energy statistics report. Moreover, consumption of natural gas in the region is driven mostly by strong economic growth backed by the increasing strength of oil prices. Additionally, consumption of CNG is very high in regions, such as Iran, Saudi Arabia and Qatar amongst others. The high growth rate for the demand for energy can also be attributed to the rising number of projects in the region, which includes domestic, service and infrastructure sectors, coupled with the growing population in the region. Such factors are anticipated to drive the growth of the MEA CNG market during the forecast period.

CNG is considered as the most viable green fuel alternative for the absence of lead and sulfur in its chemical properties and lower carbon emissions of the fuel. Vehicles that run on CNG contributes to 80% lower carbon monoxide emissions and 45% fewer hydrocarbons as compared to conventional fuel powered vehicles. Moreover, utilization of CNG as an energy source also contributes to an increase in efficiency of the machines and helps organizations achieve tasks at a lower operational cost. Such factors are anticipated to drive the growth of the MEA CNG market in the upcoming years.

The infrastructure for CNG across MEA region is not up to the mark as compared to other conventional fuel resources. Limitation in the concentration of total number of reserves in the region is also anticipated to raise the initial deployment cost of infrastructure thereby demanding high investments. Such a factor is anticipated to act as a barrier to the growth of the MEA CNG market.