The global local anesthesia drugs market is estimated to grow with a moderate CAGR during the forecast period, i.e., 2022-2030, which can be attributed to the increasing number of surgical treatments conducted worldwide, including dental operations and plastic surgery operations. For instance, according to the National Plastic Surgery Statistics by the American Society of Plastic Surgeons, the total cosmetic surgical procedures performed in 2020 were 2,314,720. The launch of novel and effective medications such as levobupivacaine, articaine, and ropivacaine is further expected to propel the market growth for local anesthesia medications in the upcoming years. Furthermore, in developing countries such as India, Brazil, and China, rising healthcare spending is predicted to increase the number of surgeries performed. This is likely to drive the market growth. Furthermore, as R&D investments in healthcare and pharmaceutical research increase, the efficiency of local anesthetic medications is also projected to improve. CLICK TO DOWNLOAD SAMPLE REPORT 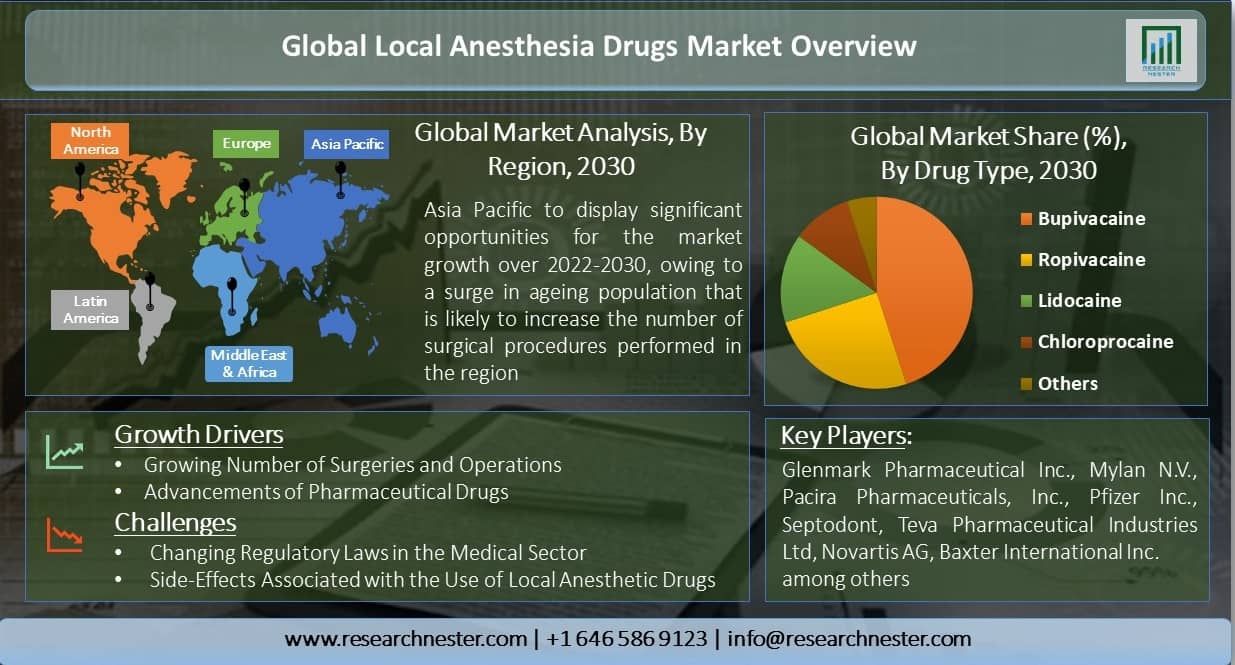 The market is segmented based on drug type into bupivacaine, ropivacaine, lidocaine, chloroprocaine, and others. The bupivacaine segment is anticipated to grab the most significant share by the end of 2030. This can be credited to the fact that the drug provides a prolonged duration period, as it lasts significantly longer after delivery than other drugs. Furthermore, it is more effective than other medicines at controlling post-operative pain. Additionally, based on the mode of administration, the injectable segment in the global local anesthesia drugs market is projected to grow with a significant CAGR over the forecast period ascribing to the widespread use of injectable anesthetics in a variety of surgical procedures. On the other hand, surface anesthetics segment is expected to expand at the fastest rate in the coming years on the back of the rising advancements in the drug delivery system.

The market is segmented into five regions, including North America, Latin America, Europe, Asia Pacific, and the Middle East & Africa region. The market in Asia Pacific is projected to grow at a steady rate over the forecast period, owing to an aging population that is likely to increase the number of surgical procedures performed in the region. According to the WHO, the population in WHO South-East Asia Region is ageing rapidly. While the proportion of people aged 60 or above was 9.8% in 2017, it will be increased to 13.7% and 20.3% by 2030 and by 2050, respectively. Furthermore, increased healthcare expenditure in the region, aided by pharmaceutical industry R&D investments, is also predicted to propel the market growth in the region. Furthermore, the market in North America is assessed to hold the largest share on the back of the the increased number of surgeries, and advances in anesthetic technologies in the region. In addition, the rising pharmaceutical expenditure to deliver effective and side-effect-free local anesthetic drugs is also evaluated to drive the market growth in the near future. For instance, according to the Congressional Budget Office (CBO) of the United States, the pharmaceutical industry devoted $83 billion to R&D expenditures in 2019. 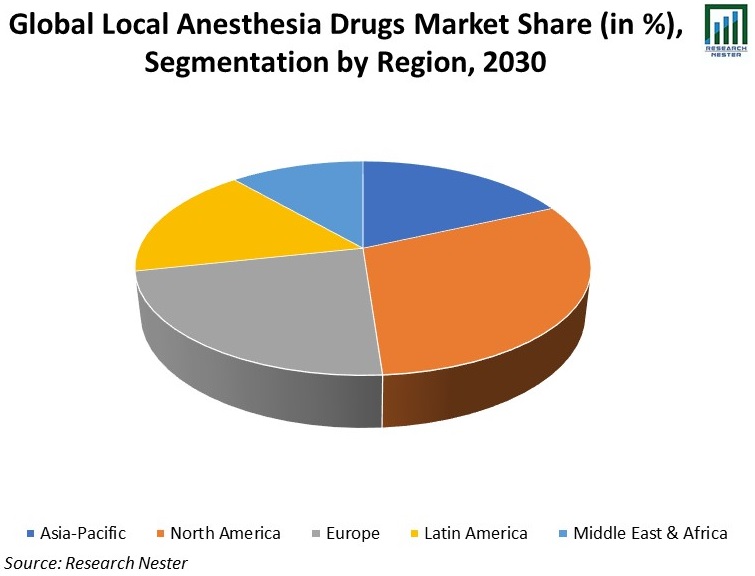 The global local anesthesia drugs market is further classified on the basis of region as follows:

What are the major factors driving the growth of the local anesthesia drugs market?

Growing number of surgeries and operations and the advancements of pharmaceutical drugs are the key factors driving market growth.

What would be the CAGR of local anesthesia drugs market over the forecast period?

What are the challenges affecting the local anesthesia drugs market growth?

Which region will provide more business opportunities for growth of local anesthesia drugs market in future?

The market in Asia Pacific region will provide ample growth opportunities owing to an increasing ageing population that is likely to increase the number of surgical procedures performed in the region.

Who are the major players dominating the local anesthesia drugs market?

What are the segments in the local anesthesia drugs market?

The market is segmented by drug type, mode of administration, and by region.

Which segment under the mode of administration segment captures the largest market size in the local anesthesia drugs market?

With respect to mode of administration, the injectable segment is anticipated to hold the largest market share owing to the widespread use of injectable anesthetics in a variety of surgical procedures.