In terms of region, global leadless pacemakers market is segmented into five major regions including North America, Europe, Asia Pacific, Latin America and Middle East & Africa region. Among these regions, North America is the biggest market in leadless pacemakers and is anticipated to witness a robust growth over the forecast period owing to factors such as rising number of people suffering from heart related diseases and growing adoption of leadless pacemakers in healthcare sector in this region. In United States of America alone, more than 70% pacemakers’ implantations have been done in recent past. Further, North America region is expected to behold this positive growth over the forecast period.CLICK TO DOWNLOAD FREE SAMPLE 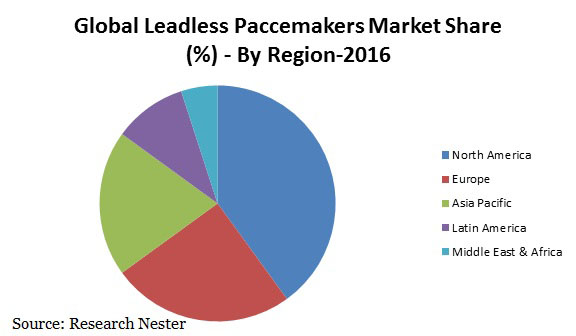 Asia Pacific region is projected to witness a remarkable growth over the forecast period owing to factors such as development of new medical industries and increasing investment in healthcare sector in this region. Additionally, factors such as rapid advancement in healthcare infrastructure and medical sector in Europe region is expected to drive the growth of leadless pacemakers market in this region.

Global leadless pacemakers market is further classified on the basis of region as follows:

However, high cost of leadless pacemakers (more than ten times of conventional pacemakers) may dampen the growth of global leadless market in near future.

Some other prominent vendors that may enter into manufacturing of leadless pacemaker are: