Jet bridge is an enclosed walkway which is used at airports. Jet bridges are either movable or fixed connectors which are usually connecting airport terminals to the aircraft. Further, jet bridges are used to lead passengers to or from aircraft without going outside or without exposing them to the outside environment. Moreover, jet bridges are generally vehicle mounted and their position can be controlled by operator sitting in a vehicle. Use of jet bridges at airports has resulted in better security and safety performance of the airports.

Global jet bridge market is expected to flourish at a remarkable compound annual growth rate (CAGR) of 8.7% during the forecast period i.e. 2017-2024. The global market of jet bridge stood at revenue of USD 760.9 Million in 2016 and is expected to flourish at a remarkable pace and reach at a revenue of around USD 1,300 Million by the end of forecast period. Rising concern towards safety of passengers at airports, development of new airports and advancement of existing airports are major factors which are likely to drive the growth of global jet bridge market during the forecast period. 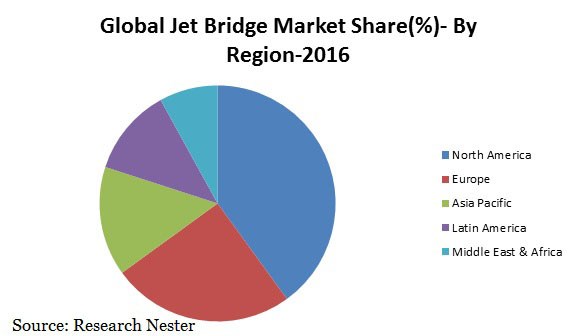 Moreover, ongoing project for new airports and increasing air traffic in Asia Pacific region are propelling the demand for jet bridges at airports of this region. These are some of the major factors which are likely to make Asia Pacific the fastest growing market for jet bridge during the forecast period. Additionally, Europe region is anticipated to witness a remarkable growth over the forecast period owing to factors such as enhancement of infrastructure of existing airports coupled with growing number of passenger at the airports in this region.CLICK TO DOWNLOAD FREE SAMPLE

Global jet bridge market is further classified on the basis of region as follows:

However, high initial cost of jet bridge is a major challenge which is likely to dampen the growth of global jet bridges market in near future.

The global jet bridges market is segmented as follows: