World Bank had announced its intention to enter into a partnership with GSMA (an association that represents the interests of mobile operators worldwide) and mobile network operators all around the globe in order to harness big data from Internet of Things (IoT). This could enable people who are suffering from poverty to be lifted out of hardship and deprivation and might also help accelerate economic growth. GSMA Intelligence estimates that there will be 25 billion connections to the Internet of Things globally by 2025.

Internet of Things (IoT) has become popular in the past few years and is being increasingly identified as the next technology that could show the path for individuals to function everyday as part of their daily routine. Internet of Things can be best described as any data transmission occurring from any object to another or sometimes to any individual using internet and more particularly without the intervention of human-beings. This happens when a sensor is attached with such object in order to effect such data transmission. Blockchain technology is already being promoted as the next revolutionary step in the enhancement of IoT towards ensuring security and privacy of data. Edge devices allow gathering and processing of data at the respective places of the users. The data that is required to be stored and processed might become faster if placed in a cloud system that is centralized. Data processing becomes swift and prevents delays through this. Moreover, even breaches in security can be detected and prevented when we use IoT edge devices.  Cloud Computing capabilities may be utilized in the event of need for ensuring swift processing of data. The edge devices such as routers that provide quicker access to core networks, firewalls that filter data movement from internal to external networks or vice versa or edge routers that are commonly used by enterprises are being utilized in order to connect with multiple interconnection of Local Area Networks. They essentially perform several functions such as routing, transmission, storage and others, while primarily playing the role of controlling the movement of data in between networks at the periphery.

The global IoT Blockchain edge devices market with its vast potential is anticipated to observe rapid growth over the next decade owing to its ability to solve key problems associated with detection and prevention of any kind of manipulation by any user, thereby ensuring transparency. The techniques associated with Blockchain that is currently in use will be able to offer solutions that could protect any tampering of data and at the same time is able to recognize the distributive nature of IoT.

The global IoT technology market is anticipated to garner revenues that might exceed USD 880 billion by the end of forecast period (2020-2027) and is estimated to aid the growth of IoT Blockchain edge devices market over the forecast period. The market is segmented by edge device type into routers, routing switch, firewalls and others, by features into complex event processing, machine learning and artificial intelligence models, applications, AI support and offline management, by organization into small & medium industries and large industries and by industry into energy, public sector, healthcare, manufacturing, retail, transport, telecommunication and information technology. The industry segment is anticipated to occupy the highest market share, owing to the demand for such devices arising from its varied applications in several areas. 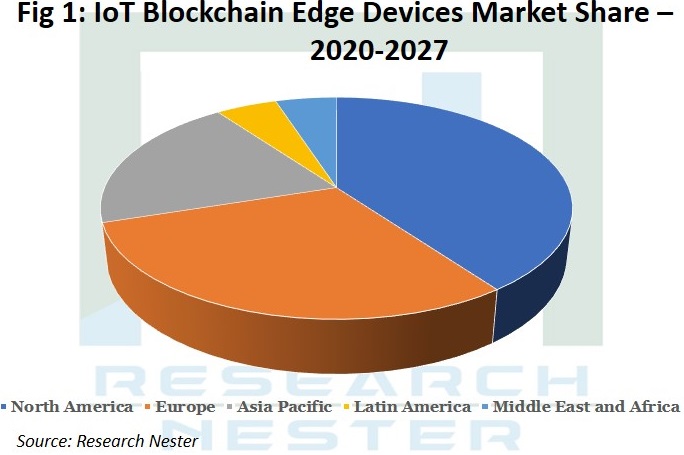 Edge devices such as edge router use an external border gateway protocol that is used over the internet for providing connectivity to distant networks. These devices also provide the opportunity of communicating with several networks including autonomous systems, in addition to securing the connectivity of its network with external networks be it a wide area network or the internet.

Edge devices can also establish a line of communication between the old and new devices wherein, the old devices would be able to interact with modern devices as part of IoT solutions.

As most of the data is stored and processed using edge devices, the requirement for cloud storage diminishes. The necessary data will only require the backup, while irrelevant data can be filtered which helps to contain infrastructure costs.

Edge devices can be accessed physically unlike cloud devices which are remotely controlled through web interfaces and hence are prone to different kinds of threats. These devices may have different computing capabilities which means that the encryption algorithms which the devices are working on might have chances of facing delays and the ever growing size of Blockchain and the database might create problem of data storage and synchronization.

On the basis of regional analysis, the IoT blockchain edge devices market is segmented into five major regions including North America, Europe, Asia Pacific, Latin America and Middle East & Africa region. North America market is predicted to occupy the highest market share, owing to the presence of several key players such as IBM, Microsoft and Amazon and the increasing acceptance of technology in the region. The Asia Pacific market particularly the countries of China, Japan have started increasingly adopting IoT technology which is driving the growth of the market steadily.

The IoT blockchain edge devices market is further classified on the basis of region as follows: