There are rising number of incidences of insect borne diseases across the globe due to increasing adoption of outdoor recreational activities by adult population such as, trekking, camping, mountain climbing and others which makes them prone to these insects at a higher rate. These activities have resulted in increased demand for insect repellants which is further anticipated to propel the growth of the market substantially over the forecast period i.e. 2019-2027. The increasing guidance, policies and strategies in order to achieve strategic information and create awareness among the population regarding vector borne diseases is expected to display a budding growth of insect repellent market during the forecast period. On the back of growing vector resistance towards traditional insecticides, the market for next generation insect repellents is expected to aid extensively in the prevention of such diseases across the globe.

Insect repellent market is anticipated to record a CAGR of 8.3% over the forecast period which can be attributed to the rise in urban population and growing awareness of insect borne diseases and their preventive measures among them. The rising penetration of insect repellents in untapped rural markets across the developing countries as well as in the under-developed countries along with growing demand for plant-based repellents in urban regions around the world due to increasing environmental concerns is estimated to drive the insect repellent market considerably over the forecast period. Mosquito borne diseases are one of the major factors that are contributing towards the sturdy growth of insect repellents market across the globe.On the basis of regional platform, the global insect repellent market is segmented into five major regions including North America, Europe, Asia Pacific, Latin America and Middle East & Africa region.

With the presence of aware urban consumer population, increasing government disease prevention initiatives and growing incidences of mosquito-borne diseases across the region, Asia Pacific is budding as a regional insect repellent utilizing market. Moreover, growing focus on R&D activities in insect repelling product innovations is estimated to impact the market considerably over the forecast period.

On the back of favorable humid climate for insect breeding across Middle East and Africa, the market is expected to exhibit a robust demand for insect repellents over the forecast period. 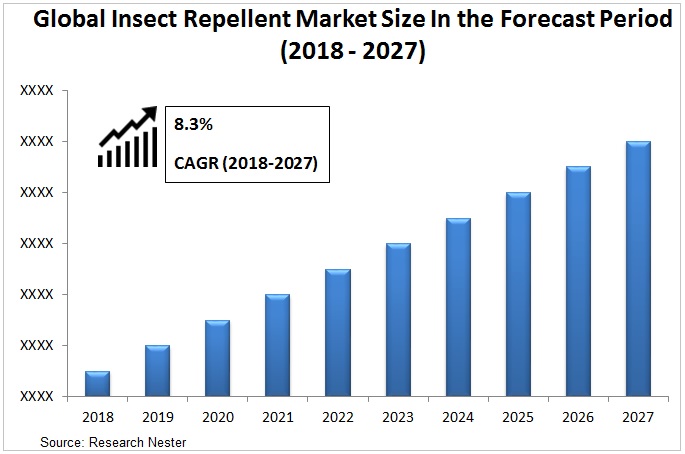 On account of increasing awareness in the consumer population regarding various insect borne diseases such as dengue, yellow fever, zika, malaria, and chikungunya which is caused by mosquitos; ehrlichiosis and lyme disease caused by ticks; Onchocerciasis/River blindness caused by blackflies among other such diseases, the market for insect repellents is expected to increase across the globe. Additionally, the incidences of insect borne diseases are very high around the globe. For instance, 219 million cases of malaria were reported in 2017 across 90 countries by World Health Organization with almost 3.2 billion people living in areas at risk of malaria transmission in 106 countries and territories and in 2016, malaria caused an estimated 216 million clinical episodes and 445,000 deaths. These factors together are anticipated to display a sturdy growth in the insect repellent market over the forecast period.

The World Health Organization along with various individual country’s government initiatives are trying to prevent various insect borne diseases and reduce the number of deaths across the globe. For instance, National Vector Borne Disease Control Programme is a government organization launched in the year 2003 for prevention and control of vector borne diseases in India. In the year 2017, WHO reported that more than 17% of all infectious diseases, causing more than 700 000 deaths annually were caused due to insect (vector) borne diseases. The high occurrences of infection rate and deaths caused by infection carrying vectors such as various types of mosquitoes, sandflies, Triatomine bugs, fleas, aquatic snails, lice and many others are expected to drive the market for insect propellants robustly during the forecast period.

Furthermore, growing demand for insect repellants containing natural ingredients that display higher effectiveness is expected to drive the demand even more over the forecast period. This can be attributed to increasing consumer concerns regarding environment sustainability across the globe.

However, the stringent laws associated with the product acceptance by the government along with strict regulatory standards set across the globe are expected to hinder the growth of the insect repellent market. Additionally, the lesser concentration of active ingredients resulting in lower efficiency combined with high toxicity of these insecticides is estimated to restrain the insect repellants market.

Global insect repellent market is further classified on the basis of region as follows: 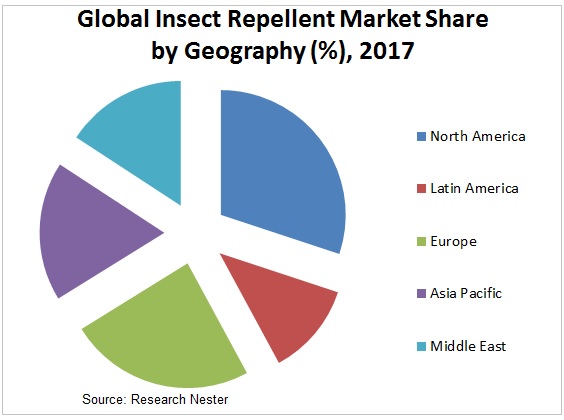